The UK is due to see mixed weather conditions this week with temperatures plummeting to bone-chilling lows. Frost and heavy rain is predicted to hit parts of the country and next week the weather is likely to become even more wintery as a hellish snowstorm is forecast to hit.

This weekend saw temperatures plunge to -7C overnight with urgent warnings being issued.

Topcliffe in North Yorkshire, Benson in Oxfordshire and Katesbridge in Co Down were the coldest places in Britain as freezing weather took hold.

The Met Office said Northern Ireland experienced its coldest night of the winter, and -1C temperatures were felt across London.

The chilly weather conditions are due to continue this week amid a warning from Public Health England.

A mid-range cold weather alert has been issued by Public Health England from 6pm on Sunday to 6pm on Tuesday.

The organisation is urging people to prepare for cold weather conditions and look out for those most at risk, especially the elderly. 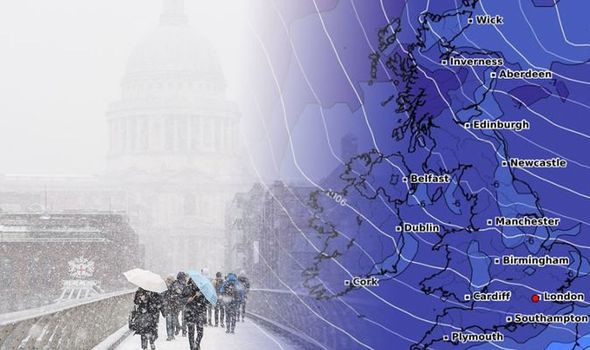 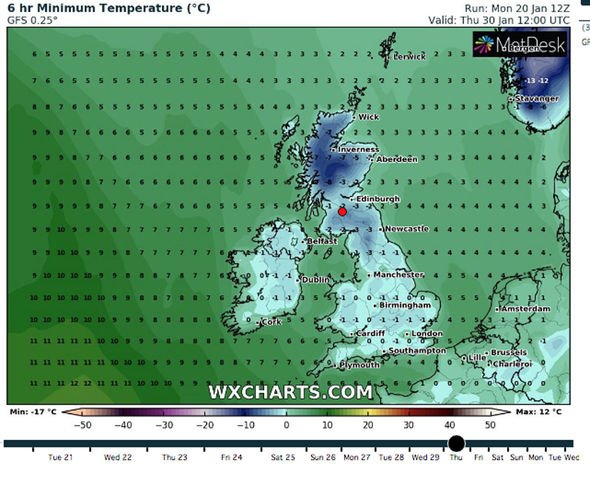 Snow charts from some weather forecasters such as WX Charts show snow pelting the UK.

The weather forecaster’s Winter Overview map reveals there is a chance of heavy snow up to 17 inches hitting parts of Scotland, with the worst of the snow falling on January 27, 28 and 30.

In total up to 17 inches (44cm) of snowfall is predicted to hit areas of Scotland.

Central and southern Scotland will see much less snowfall at around one to four cm. 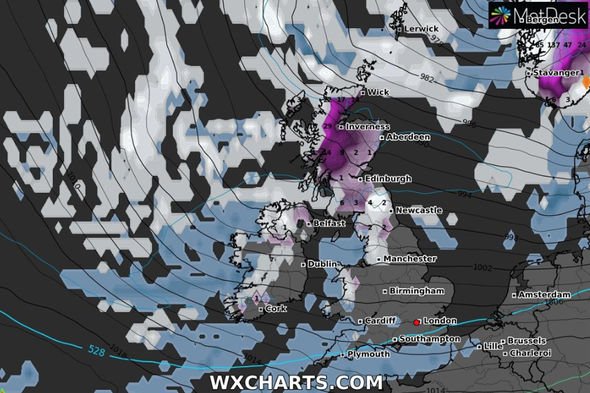 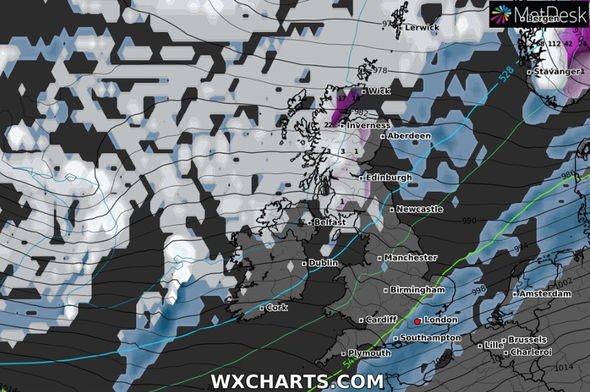 Northern Ireland also appears likely to be hit by snow as well as parts of northern England and Wales.

However, it appears that most of the Midlands and southern England will escape any snowfall.

Thursday, January 30, will see the coldest temperatures according to WX Charts, with minimum temperatures dropping to -8C at midday.

The mildest minimum temperature for this time is forecast to be one degree along the UK coastline.

The Met Office forecast for this week predicts frost and fog in the south, while it will be cloudier in the northwest.

Specifically, Monday night will show clear skies across many central southern parts allowing a frost and some freezing fog to form.

Conditions will be cloudier and milder in the northwest with some light rain and drizzle, mainly over the hills of western Scotland.

Tuesday will include some fog patches in the south which may be slow to clear in places, but many parts will see some sunshine.

In northwestern areas, it will be cloudy with further rain and drizzle for western Scotland.

From Wednesday through Friday it will be mainly cloudy, windy, some outbreaks of rain in the north and brighter spells in the east.

There will be fog, low cloud further south lifting onto hills, but it will be mainly dry, rather cold temperatures recovering to average. 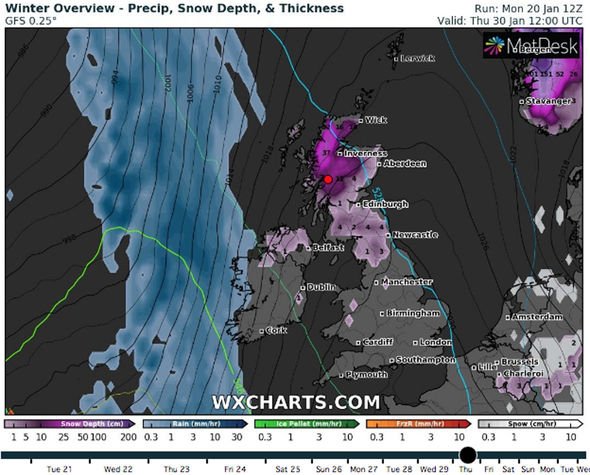 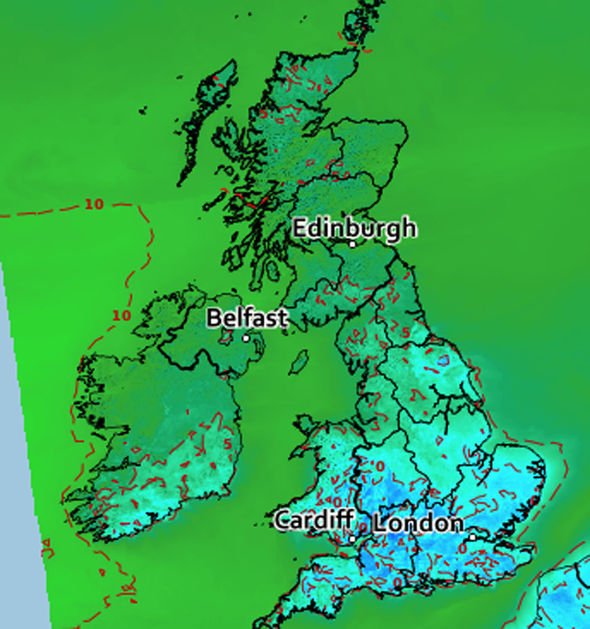 The outlook through to Monday, February 3, indicates the coming weekend will remain cloudy for most.

But there is likely to be a spell of rain for a time in the northwest, spreading southeast across most parts, accompanied by strengthening winds.

Next week, it looks like the south will see the driest weather, whilst the north could be wetter and windier at times.

Later on in this period, some rain may briefly spread further southeast across the UK, although the most unsettled weather is likely to remain in the north and northwest, where some hill snow is possible.

Further southeast drier spells will be accompanied by the best of any brightness, along with the greatest risk of fog and frost.

Temperatures will generally be near average, although a little below at times in the north.

The beginning of February may also see heavy snowfall hit the north of the country.

The Met Office said: “Through the first half of February, we are likely to see a north/south split continuing; with the north being more unsettled than the south.

“The heaviest of the rainfall and strongest winds are likely to be seen across the northwest.

“The south is more likely to see drier, brighter conditions with light winds.

“There is potentially a greater risk of frost and fog patches developing towards the south.

“During colder, showery interludes, any snow will most likely be over higher ground in the north, but it could fall to lower levels at times.

“Temperatures will remain close to or above average through the period, though will likely fluctuate as frontal systems pass through, especially in the north.”