The mercury is expected to rise from this Sunday, June 17, particularly in South East England, before a collapse later in the week. Prediction models for Sunday showed up to 33C degrees in London, 31C in Bristol, 30C in Birmingham and 29C in Southampton.

The same models show an even higher hike for the thermometers on Monday, June 18, with London seeing a scorching 36C degrees and temperatures rising even higher towards the North, with 37C degrees projected near Peterborough.

Peak temperatures could be experienced on Tuesday, with up to 39C recorded in London and Brighton, 38C in Southampton, 37C in Sheffield and 35C in Bristol.

These temperatures were estimated by a weather model called Global Ensemble Forecast System, which is run by the National Centers for Environmental Prediction.

If such a temperature is indeed recorded, it will be the highest one ever felt in the country to date. The highest ever temperature in the UK is that of 38.7C degrees, which was recorded on July 25 2019 at Cambridge, according to the Met Office. 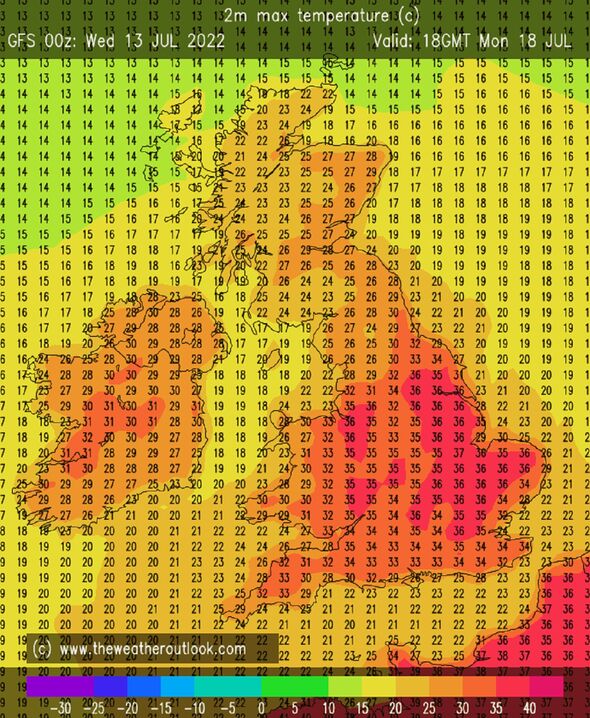 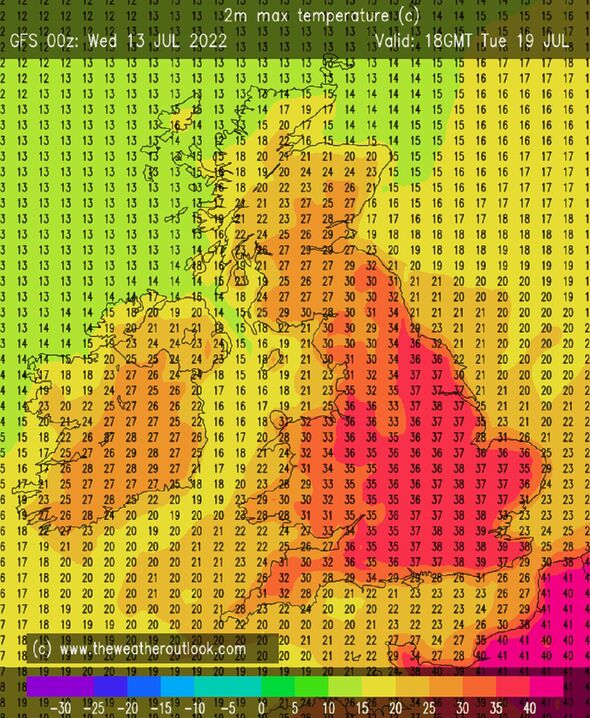 Meteorologist Brian Gaze, founder of The Weather Outlook, explained that these predictions change multiple times until the actual event occurs, but they do represent a possibility.

Mr Gaze told Express.co.uk: “It’s difficult to be exact just yet but there is about 35 percent chance of the new UK record being set on either Monday or Tuesday next week.”

He added: “We are having a very warm year so far with every month being warmer than average.”

Notably, the high temperatures on Monday and Tuesday extend towards North England, which the meteorologist said is “extremely unusual”. 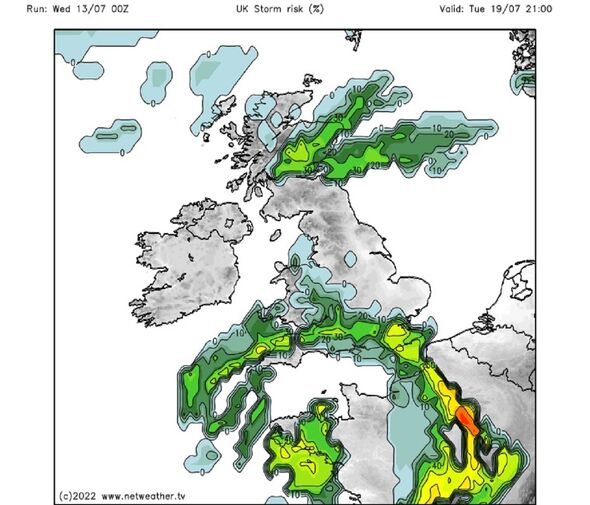 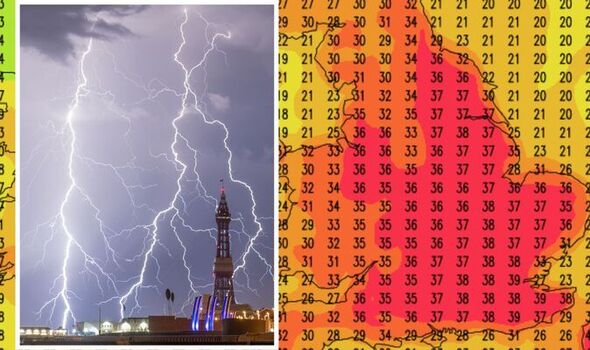 Mr Gaze said: “When we get these hot spells in the UK, the really high temperatures are generally confined to the southeastern corner, ie London, the home counties and Cambridgeshire.

“But next Monday and Tuesday it looks like the heat will spread further north than usual. Yorkshire and Lancashire could see temperatures reach in the mid-30s, which would be extremely unusUal for them.”

But after these extremely high temperatures, the UK could see a blitz of scattered storms from Wednesday, with thunder, lightning, and even tornadoes, particularly on the south coast of Wales, as seen in the video below.

DON’T MISS: Schools forced to CLOSE after no water in ‘dangerous’ heat
Brits brace for ‘unprecedented period’ as North African plume to have
Drivers warned of massive £5,000 for wearing flip flops at the wheel

The UK long-range weather forecast for these days mentions: “Thundery showers are occasionally possible in the south and southwest too, spreading erratically northwards and eastwards.”

Senior meteorologist at British Weather Services, Jim Dale, explained that this is linked to the high levels of humidity that could come along with the record-breaking temperatures.

Speaking of the phenomena that this breakdown could bring, he added: “With thunderstorms can come lightning, gusty winds, hail, torrential downpours, and even tornadoes.”

Mr Dale told Express.co.uk: “Given the fact that we’re going to see temperatures knocking on the door of the UK record, there’s every chance that the breakdown might produce severe weather.

“Monday and Tuesday look very humid and that’s when thunderstorms will start breaking out sporadically across France – some of those will arguably move into Britain.

“England and southern Wales will be affected, with the south coast being the first main hit.”