Britain is expecting temperatures to rocket towards 22C this week as “Mediterranean” air sweeps towards the country. BBC Weather forecasters claim Arctic temperatures will be pushed aside by the hot air this week with conditions “looking positively balmy”. A Met Office video shows cold air from Scandinavia push away from Britain as warmer air from the continent moves in towards the end of the week.

According to the weather chart, temperatures are expected to reach 22C by Friday this week.

Met Office meteorologist Greg Dewhurst said: “Next week we start to draw in warmer air from the near continent and temperatures are set to rise.

“Low pressure towards the Atlantic will bring weather fronts in at times, particularly across the west, but high pressure always anchored to the northeast and eventually we will start to draw in warmer air from the near continent.

“This will allow temperatures to rise into low 20’s, 21C possibly 22C, as we head towards the Easter weekend.” 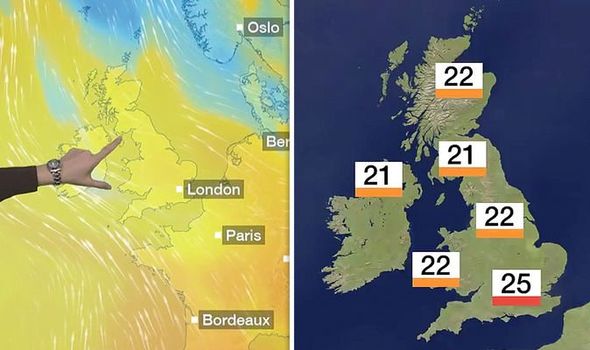 She said: “For the week ahead we are still talking about a lot of settled weather, thanks to high pressure, the biggest change it is going to turn warmer.

“Here we are today, high pressure holding things steady, especially in the east, but it has locked us into some quite cold continental air, low pressure is trying to get involved in the west. But, to very little avail.

“Here is that change of rate week ahead. We start to pull up some air from the Mediterranean, squeeze away that air from the Arctic.

“By Easter weekend it is looking positively balmy actually for many of us.”

Leading bookmakers have even slashed odds on thermometers nudging towards 25C this week and over Easter Bank Holiday weekend.

Coral’s Harry Aitkenhead said: “We had been expecting it to be a cold Easter this year but the temperatures are on the way up at last.

“We make it odds on that we see 25 degrees or higher this week and it’ll certainly be a Bank Holiday weekend to spend in the sunshine.”

Coral make this summer 6-4 to go on to be the hottest ever after 2018 pushed the record books very close.

Aitkenhead said: “Last summer was an absolute scorcher and this rise in temperatures is giving us hope that 2019 might be just as memorable.

“It’s 6-4 to break the record and end up as the hottest we have ever had.”