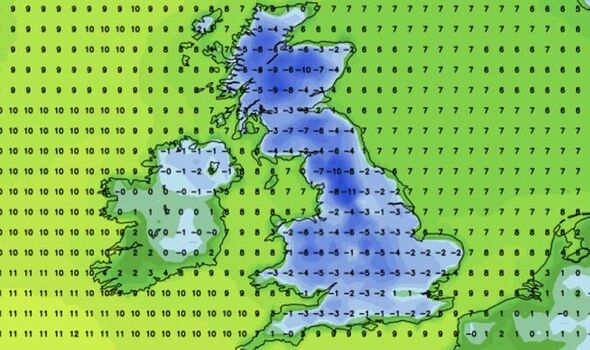 Weather models reveal the entire country is at risk of an early-April snow deluge, reminiscent of the 2018 late winter Beast from the East.

The freezing U-turn after a weekend scorcher will also bring heavy rain, winds and wintry downpours.

Britons are warned to make the most of the early spring sunshine with colder weather expected from Monday.

James Madden, forecaster for Exacta Weather, said: “During the last part of March, there are signs of colder weather gripping the UK once again.

“This looks like holding out into April and during this period conditions may turn wintry, particularly in northern regions.

“Compared to the recent weather we have had, the end of March could be about to dish up a bit of a sting in winter’s tail.”

The jet stream, currently to the north of Britain, will dive southwards ploughing across the country with core speeds of 100mph.

It will drive out high-pressure responsible for the warm weather and open the doors to the Atlantic and the Arctic.

Britons are urged to make the most of a few more days of glorious sunshine and spring warmth this weekend before the big change arrives.

Temperatures will rocket through the next couple of days nudging 20C in parts with lashings of blue skies and sunshine.

A huge high-pressure system stretching across northern Europe will start to weaken at the start of next week triggering the first hints of winter’s return.

Met Office meteorologist Alex Deakin said: “High pressure will bring plenty more sunshine this weekend and it will continue to be pretty warm, especially by day.

“It looks like next week will start largely dry and bright, but cold air is trying to push further south, and models are showing the main theme that we are expecting things to turn colder.

“European models show colder air by Monday becoming much more extensive across the northern part of the UK, but Tuesday we will all be in it.”

Despite the glorious start to spring, forecasters have warned Britons are not out of the winter woods just yet.

Jim Dale, meteorologist for British Weather Services, said: “It is really going to turn cold next week, and we will be back in coats and jumpers.

“This is coming in from the east, and there could be the chance of some snowfall over the Grampians and highlands of Scotland.

“The change will be noticeable from the early part of the week.

“While it has been unusually warm for the start of March, there is always the chance that winter can bite back hard during April.”

Bookmaker Ladbrokes has slashed odds on an early spring whiteout to 2-1 amid forecasts for winter flurries next week.

Spokesman Alex Apati said: “Brits may have been treated to a scorching few days but we’re strapping ourselves in for the potential of April snow with temperatures heading in the wrong direction at the back end of this month.”

John Hammond, meteorologist for weathertrending, said: “The fine spell will last through the weekend.

“Most will start the new week on a dry note, and, in the sunshine, it will continue to feel pleasantly warm.“Changes are afoot though. Computer forecasts suggest that a cold front will spread down from the northeast, introducing chillier air in its wake by midweek.”