People in the UK have basked in glorious highs of almost 30C over the last month despite lockdown measures restricting leisure activites outside. Thursday saw warm temperatures in the south and southeast of the country, with highs of 15-17C. Average temperatures for this time of the year is usually 14C in Northern Scotland and 19C in Southern England, according to Net Weather.

But he warned a low pressure system will bring “sharp showers” and gales from the Scandanavian direction of the North Sea.

He said: “Low pressure will be developing and moving in from the east towards Scotland.

“That’s going to bring persistent rain into the northeast of Scotland initially, spreading south and west through the day. 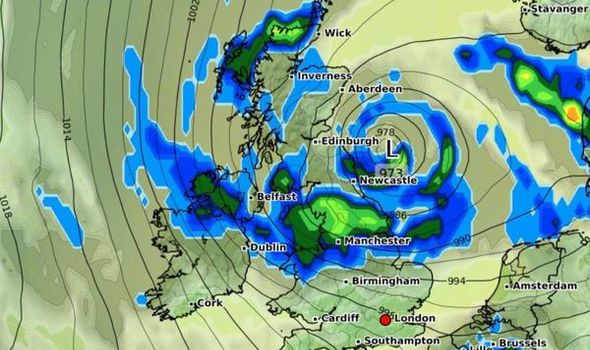 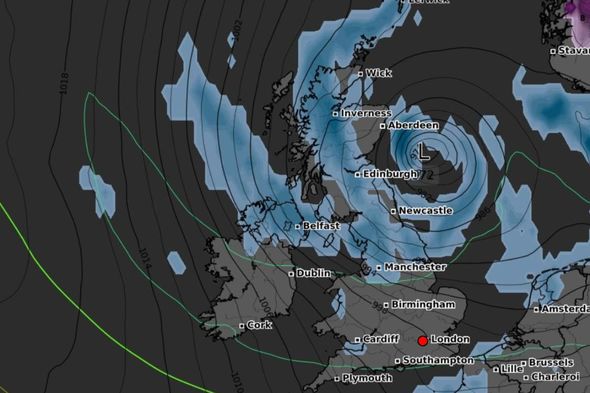 “It’ll also bring gales to coastal areas of Scotland, Northern Ireland and northern England by the end of the day.”

The latest weather charts for this weekend show swirls of blue and green sweeping across Scotland first.

Then as the weekend progresses, the wind and rain will make its way down towards southern regions of England.

Mr Michaelwaite added temperatures are likely to drop as low as 15C in some parts on both Saturday and Sunday. 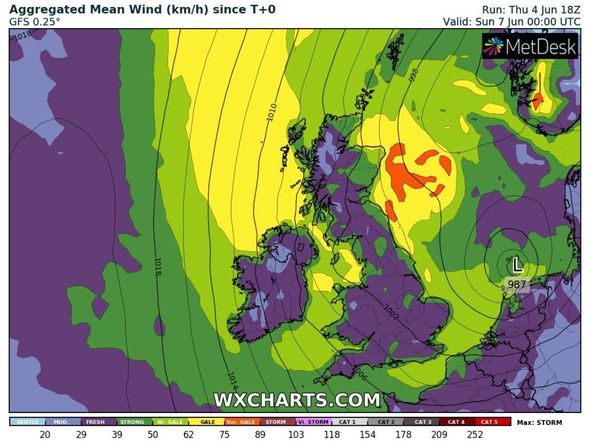 He said: “The low will then slide down the east coast of the UK overnight and into the start of Saturday, taking its rain and strong winds south as it goes.

“The rain will become more patchy the further south it heads, but it’ll still be a noticeable feature, bringing at least some (much needed) rain and the strong winds will continue for much of the weekend – especially near to the coasts.

“The patchy rain could take some time to clear the south and southeast during Saturday, with another band moving southeast through Scotland and into the far north of England during the day.

“Away from those two zones, it should be mostly dry with some brighter or sunnier spells and just a few showers. 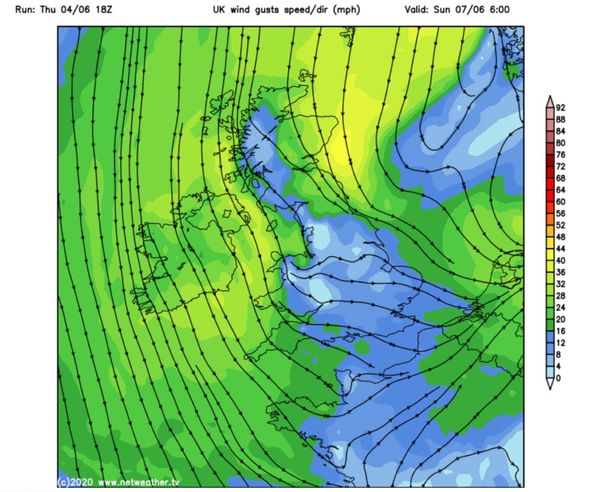 “Highs across England and Wales are likely to peak at a respectable enough 15-18c, a few degrees cooler than that in Scotland and Northern Ireland though.

“Sunday will see that rain potentially affecting parts of Eastern England, moving south all the while, although there is some uncertainty over this.

“Away from that threat, there should be a good deal of dry weather. But with the risk of a shower here and there.

“Temperatures will about be on a par with Saturday, maybe even a degree or so warmer in some western and central parts.” 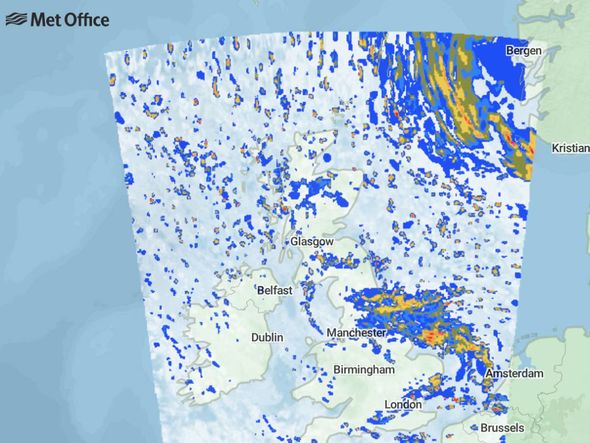 A statement on its website said: “Unseasonably windy and cool for many tomorrow with local gales in the north and west.

“Bands of rain will push south, breaking up to leave sunny spells and thundery showers for England and Wales.”

And the Met Office also said heavy rain was approaching on Friday.

It said on its website: “A breezy and showery day for many and feeling cool. Some showers heavy with the chance of the odd rumble of thunder during the afternoon. Strengthening winds and heavy rain arriving into the northeast with gales for some parts here.”