The UK will see another storm a week after the destructive Storm Ciara ripped across Britain. Storm Dennis is likely to bring very heavy rain, flooding and disruption to travel over the weekend. So where exactly will Storm Dennis hit and will your area be impacted?

Britain will be washed out by up to five inches of rain this weekend as torrential downpours engulf parts of the country.

As a result, huge and dangerous floods may be created, causing significant disruption across the UK.

The floods will likely see homes and businesses damaged, as well as lives threatened by the fast-flowing or deep floodwaters, the Met Office has warned.

In total, the weather forecaster has issued four amber weather warnings on Saturday and Sunday across regions of England and Wales. 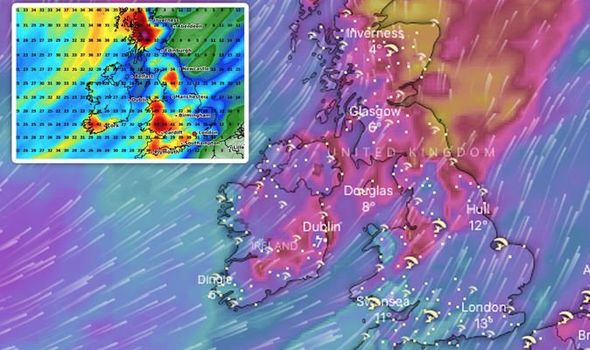 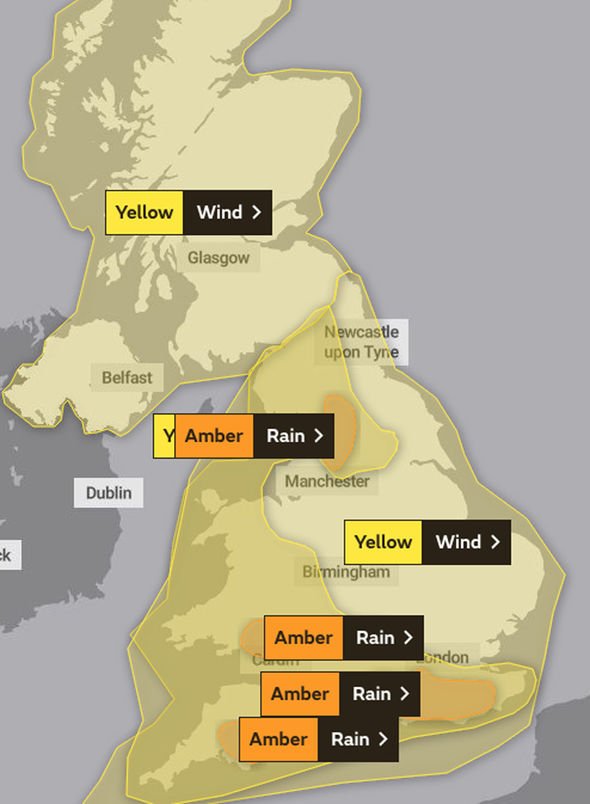 Four amber and five yellow weather warnings have been issued by the Met Office from Friday to Monday.

The four amber weather alerts for rainfall warn of heavy rain, flooding and disruption to travel in parts of the UK.

The weather forecaster advises homes and businesses could be flooded and damaged, fast-flowing or deep floodwater is likely, causing danger to life and train and bus services cancellations and delays are also likely.

Additionally, there is a chance spray and flooding might create difficult driving conditions and cause road closures and there is a good chance some communities will be cut off by flooded roads.

Power cuts and loss of other services to some homes and businesses are also likely.

The areas specifically affected by these amber alerts across England and Wales are: 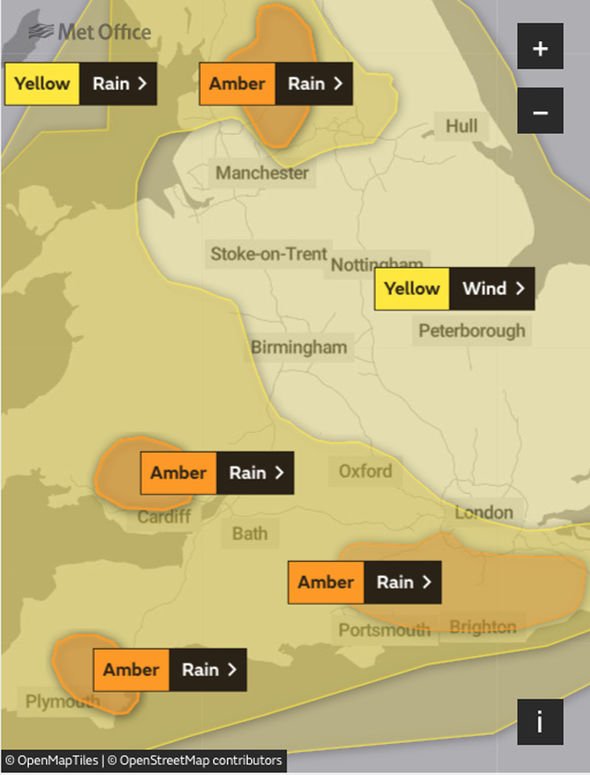 On Sunday, a fourth amber warning comes into effect from 12.15am to 6pm across London and the South East of England.

The weather forecaster advises the same dangers will batter this region as with the other amber alerts, adding up to 1.6 inches of rainfall is expected widely across the area, while more than three inches may hit across parts of northern and southern England.

In some areas of higher ground in Wales and southwest England, up to six inches of rain is possible.

In terms of the yellow weather warnings, the first is in effect on Friday from 9am to 5pm across southern Scotland.

The Met Office warns rain and snow might across the region on Friday causing disruption to travel.

Accumulations of up to one inch (20mm) are likely across high ground and in combination with a thaw of lying snow this may lead to some local flooding.

The weather warning is likely to hit the following areas worst: 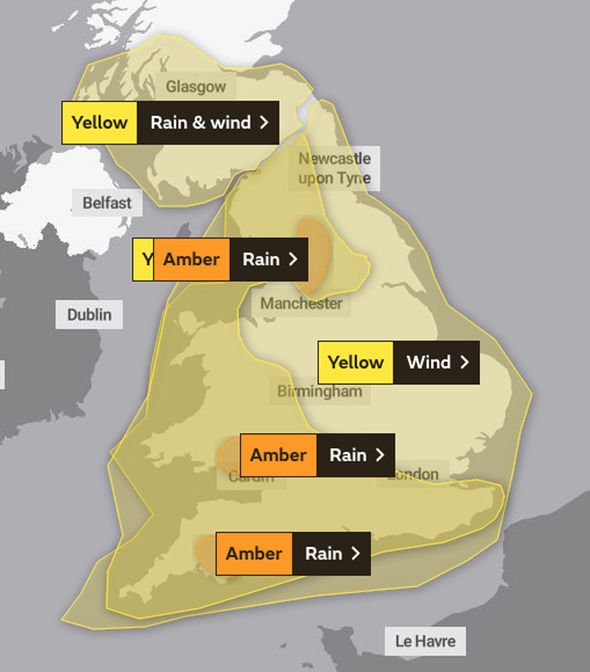 The second yellow weather warning for rain and wind is in effect across southern and southeastern Scotland on Saturday from 9am to 6pm.

Wind will gust up to 60mph along exposed coasts and over higher ground, with up to two inches (40mm) of rainfall likely to fall in higher areas.

The following areas will be affected by this rain and wind on Saturday:

On Saturday, the Met Office has also issued a yellow weather warning for wind from 10am on Saturday to 11.59pm on Sunday impacting all of Wales and England.

Storm Dennis will bring strong winds over the weekend causing some disruption to travel.

The strongest winds are likely to be on Saturday afternoon and evening, with a lull overnight, before increasing again during Sunday.

Gusts of up to 70mph are expected around the coasts in the west and south, with wind speeds of 50mph expected inland. 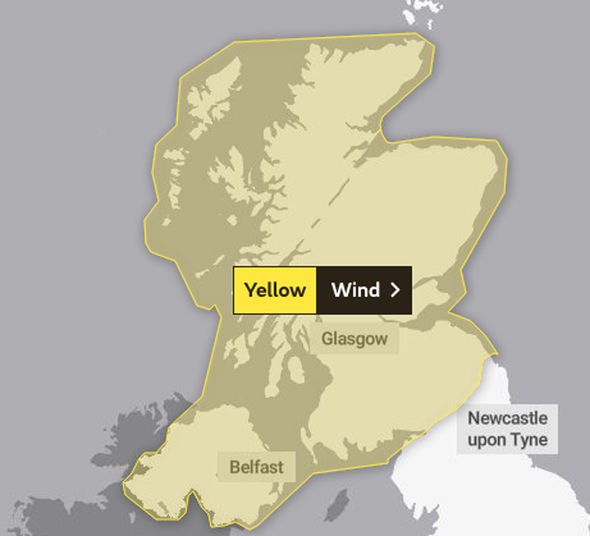 A yellow weather warning for rain is in force from 12pm on Saturday to 9pm on Sunday across parts of England and Wales.

The following regions and local authorities will be affected:

On Sunday, the Met Office has issued a yellow weather warning for wind at 12pm on Sunday to 12pm on Monday.

The weather forecaster warns of the potential for very strong winds to develop across Scotland, Northern Ireland and northern parts of England bringing travel disruption on Sunday and on Monday morning.

The location and strength of the strongest winds is uncertain at this stage, but there is a small chance that winds will gust up to 70mph for a time.

But the Met Office said it expects the winds to remain around 50mph mostly.

The strongest winds could coincide with the Monday morning peak travel period.

These regions and local authorities will be hit by these intense winds: