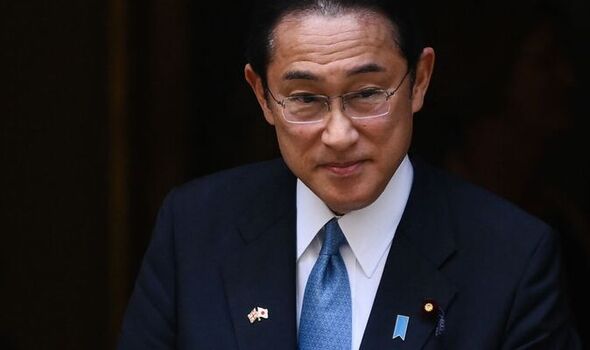 Fumio Kishid, who was received by Mr Johnson at No10 on Thursday, said: “Ukraine might be East Asia tomorrow.” His stark warning came as he condemned Moscow’s attacks on Kyiv. Japan, a member of the G7 group of leading economies, is part of the Western alliance defending the war-torn nation. It has imposed sanctions on Russia and sent non-lethal military aid to Ukraine.

Talks at Mr Kishida and Mr Johnson’s meeting focused on the “landmark defence partnership” that will allow British and Japanese forces to work together by carrying out training, joint exercises and disaster relief activities.

The move is part of the Government’s post-Brexit policy to deepen ties with nations in the Indo-Pacific region, which the Prime Minister has previously described as “increasingly the geopolitical centre of the world”.

Mr Johnson said before welcoming his counterpart: “The visit of Prime Minister Kishida will accelerate our close defence relationship and build on our trade partnership to boost major infrastructure projects across the country – supporting our levelling up agenda.”

The two prime ministers also touched upon a key issue in the West’s response to the war – energy. Both countries say they are committed to exerting pressure on the Kremlin and helping allies become less dependent on Russian oil and gas.

Addressing UK business leaders at London’s Guildhall ahead of his meeting with Mr Johnson, Mr Kishida said Tokyo would utilise nuclear reactors to reduce its dependence on energy coming from Vladimir Putin’s ground.