Kyiv: Ukrainian police are investigating reports that some citizens have been illegally inoculated against COVID-19 with vaccines that have not been officially approved, and charged up to €3000 ($4740) per dose, senior officials said.

"If someone really thought of secretly and in violation of the law to import a vaccine for sale, the reaction should be as harsh as possible," President Volodymyr Zelenskiy said on the Telegram messenger service on Wednesday (Ukraine time). 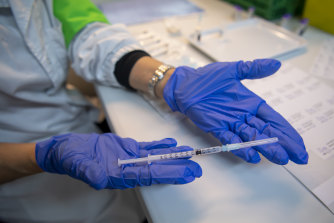 Reports suggest the illegal vaccines are being sourced from Israel. Credit:AP

Ukraine, which has registered more than 1 million COVID-19 infections and 19,357 deaths, has yet to approve any of the newly developed vaccines, though it signed a contract in December to buy 1.9 million doses of China's Sinovac jab, and the shots are expected to be delivered soon.

Some Ukrainian media outlets reported that a clinic in Kyiv had begun inoculating people, probably with the vaccine developed by Pfizer and BioNTech, at a charge of up to €3000 per dose.

The reports said the vaccine could have been brought in from Israel and that several top officials and business figures had been vaccinated.

Zelenskiy said the government had a clear vaccination plan and people at high risk of infection and "those at the forefront of the fight" against COVID-19 – which would include medical workers – would be inoculated first.

Prime Minister Denys Shmygal said that none of the newly developed vaccines has yet been certified in Ukraine.

"And I'm sure no rational person would get vaccinated with drugs of unknown origin," Shmygal said.

The Pfizer/BioNTech vaccine has been approved in the 27-nation European Union and given to hundreds of thousands of people since roll-out began a week ago, generally free of charge. Approved inoculations have also begun in the United States, Britain, Canada, Switzerland and Israel. A second vaccine, from Moderna, won EU regulatory approval on Wednesday.

Ukraine also hopes in March to receive the first batch of 8 million doses of vaccines under the global COVAX facility, set up to provide vaccines to poorer countries.

Coronavirus infections in Ukraine began rising again in September and have remained consistently high ever since, triggering several national lockdowns.