Europe blasted for ‘fundamental failure’ over Russian invasion of Ukraine

The Russian Freedom Legion is urging Russian nationals in Ukraine to join the Legion to “fight for a free Russian and against the Putin regime at virtually all enlistment offices throughout the country”.

A video posted to Twitter shows members of the legion putting up their flag on the gates of the Russian embassy.

Describing themselves, the group “is a legion of the Armed Forces of Ukraine” that was formed in March “to protect Ukraine against the 2022 Russian invasion”.

The white-blue-white flag reads “Freedom of Russia” in Russian.

According to the manifesto of the legion, published on their Telegram channel in April, they “carry the values of the Free Man of New Russia – freedom of speech, freedom of expression, freedom to choose your future”, and their main goals are the overthrowing Putin’s regime and “struggle for the New Russia”. 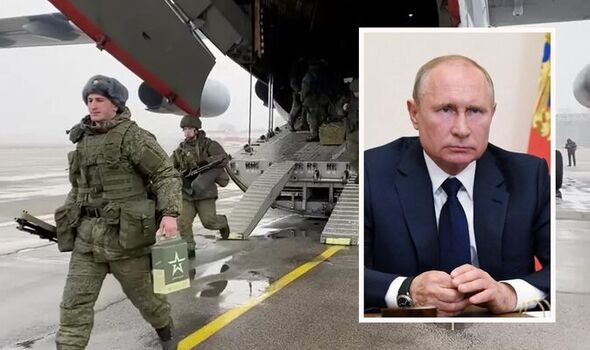 VOLODYMR ZELENSKY’s Ukrainian forces launched a devastating strike on the Antonovsky Bridge near the Russian occupied city of Kherson on Wednesday and Thursday, according to officials and social media reports.

The attack on Wednesday coincided with the 31st anniversary of Ukraine’s independence from the Soviet Union.

It comes as Kyiv is launching a counter offensive in an attempt to recapture Kherson which was seized by Russia in March.