UN chief Antonio Guterres has demanded an “immediate” halt to fighting in Yemen, as he warned that the country stands on a “precipice” and could face the world’s “worst famine” for decades if violence continues unabated.

Addressing reporters at the world body’s headquarters in New York on Friday, the secretary-general said the warring parties must seize on the “opportunity for peace” presented by UN-brokered talks scheduled to be held in Sweden later this month.

“We must do all we can now to end human suffering and avoid the worst humanitarian crisis in the world from getting even worse,” he added.

The conflict in Yemen, the Arab world’s poorest country and home to an estimated 28 million people, began with the 2014 takeover of the capital, Sanaa, by Houthi rebels, who toppled the internationally recognised government of President Abd-Rabbu Mansour Hadi.

Concerned by the rise of the Houthis, believed to be backed by Iran, a US-backed Saudi-UAE military coalition launched an intervention in 2015 in the form of a massive air campaign aimed at reinstalling Hadi’s government.

According to the UN, at least 10,000 people have been killed since the coalition entered the conflict. The death toll has not been updated in years, however, and is likely to be far higher. The Armed Conflict Location and Event Data Project (ACLED), an independent watchdog, recently said around 56,000 Yemenis had been killed in the violence.

In his comments to the media, Guterres also called for an increase in foreign aid and for “food, fuel and other essentials” to be allowed to enter Yemen “without restrictions” in order to alleviate the suffering endured by the 22 million Yemenis deemed by the UN to be in need of humanitarian assistance.

On Thursday, Yemen’s internationally recognised government said it was ready to restart peace talks with the Houthis after recent efforts to meet ended in failure.

Discussions between the warring factions were planned for September in the Swiss city of Geneva but fell apart after Houthi representatives refused to attend, saying the UN had failed to meet the group’s pre-summit demands.

Following the collapse of the talks, which would have been the first of their kind in nearly two years, the coalition announced it was relaunching an assault on Houthi-held Hodeidah, a strategically important Red Sea port city.

On Friday, the AFP news agency reported that a fierce battle between forces loyal to Hadi and Houthi fighters near Hodeidah resulted in the death of at least 34 rebels and six pro-government troops.

The clashes came hours after the Saudi-UAE alliance said it had bombed Sanaa International Airport and an adjoining airbase.

Earlier this week, the coalition sent more than 10,000 new troops towards Hodeidah before a new offensive aimed at securing “areas liberated” from the Houthis, according to Yemeni government officials.

Hodeidah is the only port held by the Houthis and serves as the entry point for the bulk of Yemen’s commercial imports and aid supplies.

The coalition has imposed a blockade on the port, however, allegedly as part of efforts to prevent the Houthis from using it as a landing point for weapons supplied by Iran.

Both Tehran and the rebels deny the port is being used to smuggle arms from Iran into Yemen.

A UN report published in August said the blockade, part of wider coalition-enforced restrictions on access to Yemen’s other ports and the country’s airspace, may have violated international humanitarian law.

The report was critical of all parties to the conflict, however, and concluded there were “reasonable grounds” to believe “a substantial number of violations of international humanitarian law” had been committed by pro-government forces, the coalition and the Houthis. 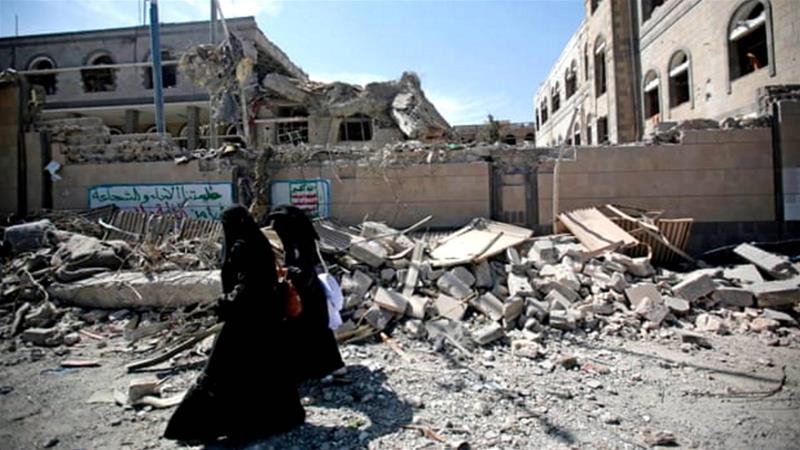 Can the UN revive talks to end the Yemen war?