UN inspectors have pressed on with their visit to an occupied Ukrainian nuclear power plant despite Russian mortar strikes on a surrounding town this morning.

International Atomic Energy Agency (IAEA) director general Rafel Grossi said: ‘We are aware of the current situation. There has been military activity, including this morning, several minutes ago… but we are not stopping.’

Ukraine accused Russia of carrying out the attacks on Energodar, the town a two-hour drive from the nuclear power plant Zaporizhzhia, ahead of the visit by UN inspectors.

Despite the shelling, Grossi’s 14-member team is expected to arrive at the Zaporizhzhia nuclear plant later today after they left at 8.15am (0515 GMT). 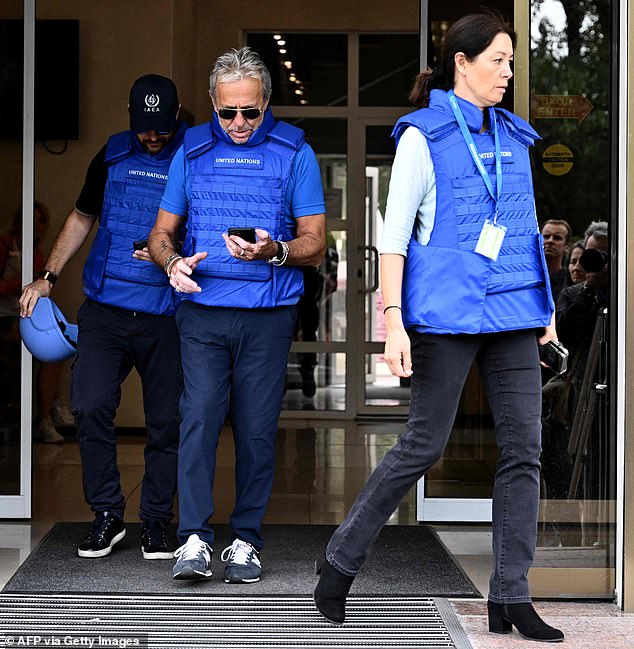 Speaking to reporters, International Atomic Energy Agency (IAEA) director general Rafel Grossi said that despite the shelling in Energodar, the team would press ahead and make their journey to Zaporizhzhia nuclear plant to inspect it. Pictured: Members of the IAEA leave the city of Zaporizhzhia to go to the nuclear plant 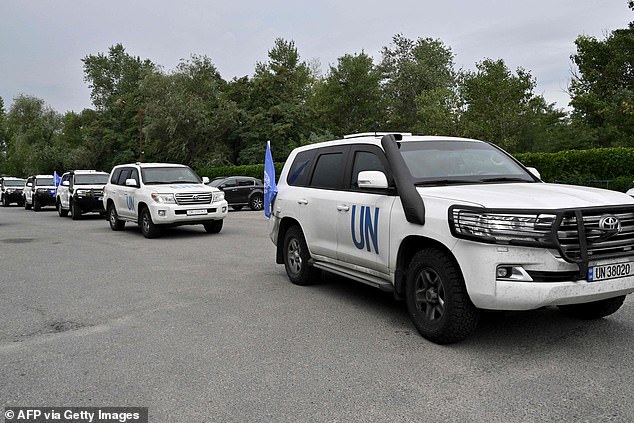 Ukraine had accused Russia of the attacks on Energodar ahead of the UN’s visit to Zaphorizhzia. Pictured: The UN convoy leaves the city to go to the nuclear plant today 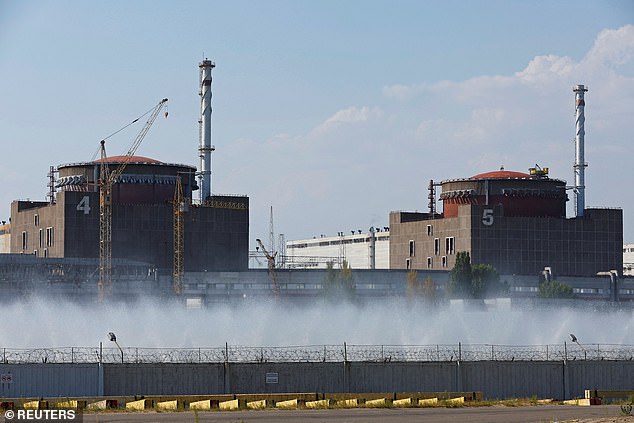 Grossi was defiant before the convoy left, saying that the team has an important mission to accomplish and will press ahead with it. Pictured: The Zaporizhzhia Nuclear Power Plant

Before they left, Grossi said:  ‘We know there is a grey area where the last line of Ukrainian defence and the first line of the Russian occupying forces begins, where the risks are significant.

‘I believe we have to proceed with this. We have a very important mission to accomplish.’

‘My mission is… to prevent a nuclear accident and preserve the largest nuclear power plant in Europe.

‘We are preparing for the real work,’ he said. ‘We are going to try to establish a permanent presence for the agency.’ 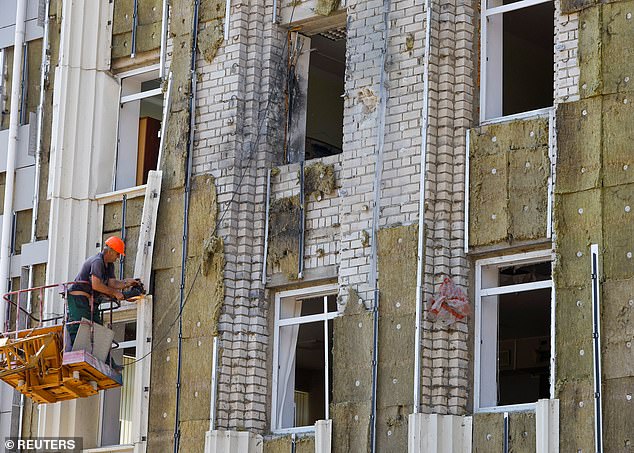 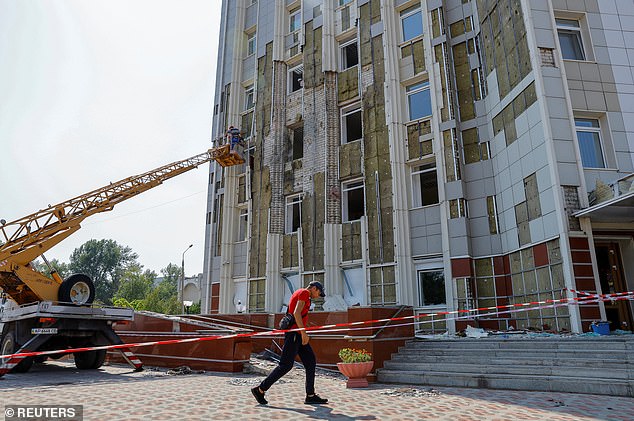 Mr Orlov said that Russian troops had used mortars, automatic weapons and rockets to shell Energodar. Pictured: A damaged building after the shelling in Energodar

Dmytro Orlov, the town’s mayor, confirmed that Energodar, which is on the south side of the Dnipro River, had come under attack since dawn.

He said that Russian troops had ‘shelled Energodar with mortars and used automatic weapons and rockets.’

The mayor posted photographs of the damage on Telegram, with smoke plumes emerging from damaged buildings.

Orlov added: ‘We demand that Russia stops its provocations and gives the IAEA access to this Ukrainian nuclear installation’. 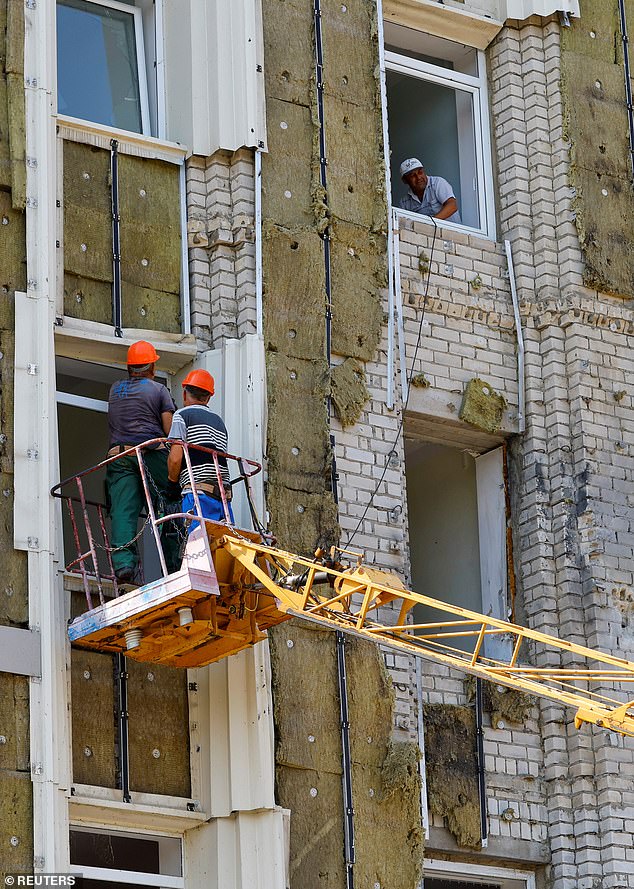 The mayor had pleaded for Russia to stop shelling Energodar and to allow the UN members to go to Zaporizhzhia. Pictured: Workers reconstruct the facade of the local administration headquarters damaged by recent shelling in Energodar 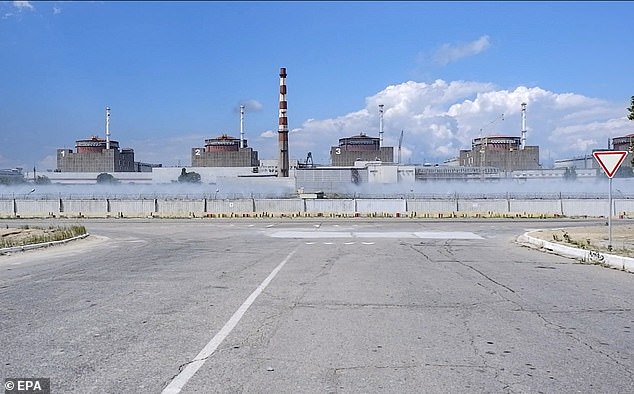 One of the two operational reactors at Zaporizhzia was also shut down in response to the shelling. Pictured: The Zaporizhzia Nuclear Power Plant

Also in response to the shelling, one of the two operational reactors at Zaporizhzhia nuclear plant was shut down, according to operator Energoatom.

Taking to Telegram, the company wrote: ‘As a result of another mortar shelling by Russian … forces at the site of the Zaporizhzhia nuclear power plant, the emergency protection was activated and the operational fifth power unit was shut down.’

And it added: ‘Power unit No.6 continues to work in the energy system of Ukraine’ and is supplying electricity for the power plant’s own needs.’

Grossi yesterday said that he and the inspectors plan to spend ‘a few days’ at the Zaporizhzhia plant following months of intense negotiations and said they would report back afterwards, adding that he hoped to establish a permanent mission in Ukraine to monitor the site.

The Zaporizhzhia plant lies on the front line between Russian and Ukrainian forces, and the area has been shelled repeatedly in recent days, with the two sides accusing each other of conducting the military strikes. 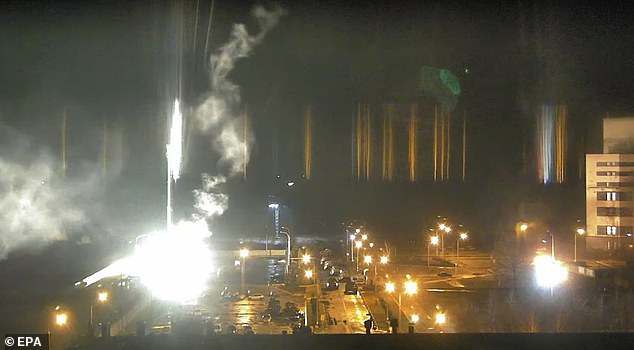 The plant has been occupied by Russian troops and operated by Ukrainian workers since March. Ukraine has accused Russia of deploying hundreds of soldiers and storing ammunition there.

‘We are going to a war zone,’ Grossi said. ‘We are going to occupied territory. And this requires explicit guarantees from not only from the Russians, but also from the Republic of Ukraine. We have been able to secure that… So now we are moving.’

Grossi said that one of the priorities of their mission would be to speak to the Ukrainian workers at the plant over concerns for their safety.

‘That’s one of the most important things I want to do and I will do it,’ Grossi said.