A pregnant authorised officer at Melbourne’s suburban rail operator Metro Trains has told the Fair Work Commission she was deprived thousands of dollars in penalty payments after being assigned a “safe” office job due to her pregnancy.

In an application to the commission, the Rail, Tram and Bus Union claimed the authorised officer missed out on nearly $1000 a month in wages when she was pregnant after being assigned to a “safe job” — an entitlement under the Fair Work Act for pregnant women who feel unsafe in their ordinary role. The union believes she is owed under $3000 in total. 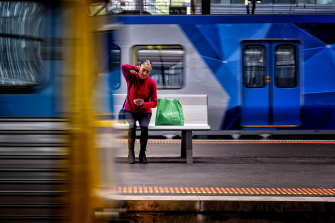 A woman waits at an almost-empty Southern Cross station.Credit:Luis Ascui

Under the RTBU’s pay deal with Metro, pregnant women who are reassigned are entitled to the same conditions as their previous role.

When the authorised officer, who asked not to be named, fell pregnant in 2019, she was relocated to the security and surveillance department on a Monday to Friday shift, according to the claim. While she didn’t receive a pay cut to her hourly rate, she ceased receiving penalty rates for weekend work.

In June this year, when the officer was pregnant for a second time, she was transferred to a Monday-Friday office job again, but received $986 a month less without weekend shifts.

The RTBU has now taken Metro Trains to the Fair Work Commission on the officer’s behalf, warning this was not an isolated case.

“Regrettably this is likely the tip of the iceberg, as there are already numerous other cases that have come forward,” the union’s Victorian secretary Luba Grigorovitch said.

“Everyone is doing it tough and workers are already under other immense pressures without the need for management to make it harder to access their very own legal entitlements.

“Unions have fought for such measures over many years so we won’t be rolling over and accepting this or any other similar case. No stone will be left unturned as now more than ever employees on the front line deserve to get what’s in their agreement.”

The state government pays Metro $330 million a year to run the city’s trains. Metro was paid an extra $65 million in relief money to keep the trains running last year and secured $12 million in bonuses for exceeding performance targets amid a 91 per cent drop in patronage.

Ms Grigorovitch said she had broader concerns about Metro cutting back on worker entitlements during the pandemic, with workers required to take personal leave for most of the 14-day isolation period.

Metro has previously confirmed to The Age that workers were asked to take personal leave when isolating.

Pandemic leave is available to workers needing to quarantine who have exhausted their personal leave, but the union argues this serves as a deterrent and is less generous than the conditions at regional rail operator, V/Line.

“We continue to see management forcing employees to use personal leave if required to quarantine, but in this difficult time companies should be supporting people to follow and comply with the public health response, not scrape up change to top up their bottom line,” Ms Grigorovitch said.

Economist at the Australia Institute’s Centre for Future Work, Mark Dean, said there were ”plenty of examples of businesses that have done it tough in COVID and still managed to ensure that workers are paid properly”.

“Considering the fact that all workers have a right to be safe at work, but also travelling to and from work, I think that puts a fair bit of onus and responsibility on the employer to make sure that they’re also covering the costs of workers, particularly if they’re at risk of being exposed to COVID-19.”

Deakin University’s chair of epidemiology Catherine Bennett said she believed workers should not be forced to take personal leave if they are exposed to COVID-19 at the workplace, but different rules would apply if they were exposed outside of work.

“If, by the nature of their work, someone may be exposed, and through that exposure, then they need to be asked to quarantine, it seems, an absolute problem, if they then have to do that on their leave whether it be sick leave or other forms of personal leave,” Professor Bennett said.

Metro said would not comment on the case as it was before a tribunal.