Up to six migrant boats are picked up in English Channel with group of 15 in one dinghy as total number of vessels making journey to Britain this year hits 5,000

At least six migrant boats were picked up off the Kent coast yesterday, marking the first Channel crossing since last Thursday.

As many as 15 people landed in a dinghy on Shakespeare beach, Dover, this morning, while at least another five boats were towed into the harbour.

Journeys across the 21-mile body of water were halted last week after Storm Francis made the waterway too treacherous. 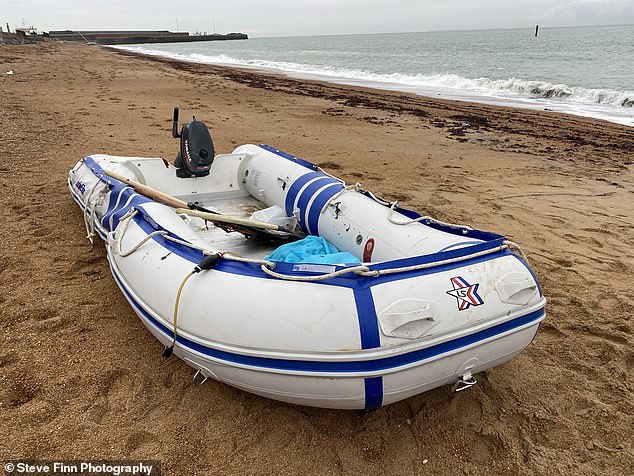 This boat was found on Shakespeare Beach, Dover, around 6.30am today. Around five more were towed into the harbour in Kent this morning

Before the latest journeys over the shipping lane, the total number of migrants to have reached Britain by small boat stood at 4,999.

On Tuesday, eight refugees were rescued after being spotted in difficulty by a cross-Channel ferry off Dunkirk. They were taken by tugboat to Gravelines, north France.

Last Wednesday, the body of Sudanese 28-year-old Abdulfatah Hamdallah was found washed up on a beach at Sangatte after he drowned trying to reach Britain.

Abdulfatah could not swim and died after his stolen 3ft dinghy capsized.

They had been using shovels to paddle and it is believed the makeshift oars punctured the the boat, which the pair had stolen from a chalet. 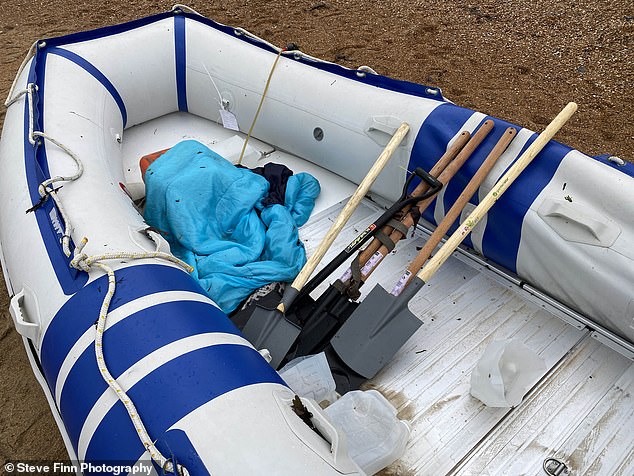 The boat was loaded up with spades and a sleeping bag. The boat crossed the 21-mile channel

Hundreds of boats recovered from British shore are currently been stored at a warehouse in Whitfield, Kent, MailOnline revealed last month.

The boats are stacked three high and in multiple rows and vary from fibreglass rowing boats to high tech large boats used by unscrupulous gangs.

It is unclear what will happen to the vessels, and whether they will be sold, repaired or taken straight to landfill to be discarded.

Six times as many illegal migrants have been arriving in the Canary Islands compared to last year, as increased security in the Mediterranean is pushing them to try the dangerous Atlantic crossing.

As many as 3,448 people had been picked up on the Spanish islands, as of August 16, whereas last year just 556 had arrived by mid-August.

However, arrivals on Spain’s Mediterranean shores have dropped by 50 per cent during the same period.