US brings forward plan to update its nukes in Europe: Gravity bombs due to arrive next year will be delivered in December as Russia raises nuclear war fears

New American nuclear bombs due to arrive in Europe next year will actually arrive this year amid fears Putin could use one of his own atomic weapons over Ukraine.

B61-12 air-dropped gravity bombs, an updated version of America’s main nuclear bomb, will be delivered to European allies this December instead of spring 2023, according to a diplomatic cable seen by Politico.

The new bomb, which is supposed to be more accurate than its predecessor, will be distributed to storage sites across the continent with older versions removed.

The move comes amid nuclear sabre-rattling by Putin who has repeatedly threatened to use Russia’s atomic arsenal against the West over the war in Ukraine.

American-made B-61-12 nuclear bombs (pictured being dropped in a training exercise) due to arrive in Europe next spring will actually arrive this December, it has been revealed

The new delivery was discussed at a meeting of NATO defence ministers in Europe a fortnight ago which was reported back to the Pentagon and State Department in a cable, which then leaked to journalists.

As well as discussing bombs, the cable reveals NATO allies are concerned about the possibility that Putin will go nuclear and want to present a united front against him.

It says: ‘Given the rising volume and scale of Russia’s nuclear rhetoric, a subset of allies requested continued consultations at NATO to ensure continued readiness and consistent messaging.’

The cable adds that 15 allies were concerned that NATO ‘must not give in to Putin’s nuclear blackmail’.

Politico said the contents of the cable had been confirmed by two sources, but Brigadier General Patrick Ryder – spokesman for the Pentagon – denied the timeline had been sped up.

Modernising B-61 bombs had been underway for a long time, the general said, and ‘it is in no way linked to current events in Ukraine and was not sped up in any way.’

Just three NATO allies – the US, UK and France – possess nukes, but the warheads and weapons used to deploy them are scattered throughout the alliance.

The alliance mostly maintains strategic nuclear weapons – doomsday devices meant to wipe out entire cities or countries – as a deterrent to being attacked.

However, NATO does also have a smaller stockpile of so-called ‘tactical’ nuclear weapons that are designed to be used in battle for tactical gain.

Russia, meanwhile, claims to have the world’s largest nuclear stockpile of 6,500 warheads that includes a mixture of strategic and tactical.

Just yesterday, Putin oversaw a huge nuclear drill – ‘Grom’ or ‘Thunder’ – involving the test-launch of weapons including the Yars intercontinental ballistic missile designed to carry some of its largest warheads.

Russian state propagandists said the drills were a rehearsal for destroying the UK and US, though stressed that would only happen if Russia were attacked first. 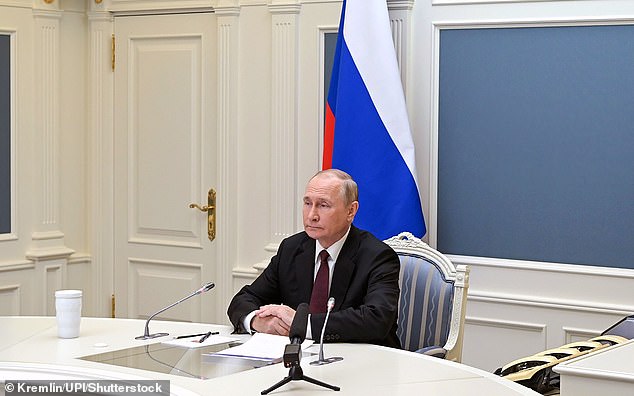 Putin has threatened the West several times with Russia’s nuclear arsenal over the war in Ukraine, vowing that he is ‘not bluffing’ about using the weapons

The exercise began last week and is due to last until Sunday with 14 of NATO’s 30 member-states taking part.

U.S. long-range B-52 bombers also took part after flying in from Minot Air Base in North Dakota.

NATO decided to press ahead with the drill despite the war in Ukraine, will alliance head Jens Stoltenberg saying it would send ‘a very wrong signal’ to Putin if they backed down.

The Russian despot has now threatened the West several times with his own nuclear arsenal over the Ukraine war, which his troops are slowly losing.

In his most-recent atomic rant, he falsely accused NATO of plotting to attack Russia and said anyone threatening him with nukes could become a target themselves.