Washington: The US House of Representatives voted on Monday, local time, to override US President Donald Trump's veto of a $US740 billion ($974 billion) defence policy bill, in a rebuke to the president that underscored deep divisions in the Republican Party during his final weeks in office.

The Democratic-led House also voted 275-134 to support Trump's request for $US2000 COVID-19 relief cheques on Monday, sending the measure on to an uncertain future in the Republican-controlled Senate. 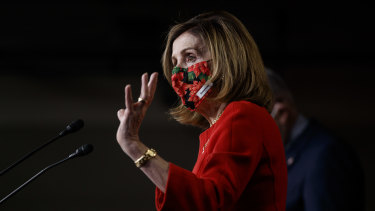 The 322-87 House vote on the defence bill, in which 109 Republicans voted to override Trump's veto, leaves the measure's fate to the Republican-led Senate, where a final vote is expected this week. If the Senate seconds the House action, it would be the first veto override of Trump's presidency.

Trump, who is angry that some Republicans have acknowledged his loss to Democratic President-elect Joe Biden in the November 3 election, vetoed the defence bill last Wednesday. Biden will be sworn in as president on January 20.

Trump said he blocked the legislation, because he wanted it to overturn liability protections for social media companies unrelated to national security, and opposed a provision to rename military bases named after generals who fought for the pro-slavery Confederacy during the Civil War.

The legislation, which addresses a host of defence policy issues and includes a pay raise for US troops, has been passed by Congress every year since 1961.

The bill passed both chambers of Congress with margins greater than the two-thirds majorities needed to override the president's veto.

But Trump vetoed it anyway and the bill went back to Congress for further votes on whether to override the veto.

Trump last week threatened to block a massive pandemic aid and spending package if Congress did not boost stimulus payments from $US600 to $US2000 and cut other spending. He backed down from his demands on Sunday as a possible government shutdown brought on by the fight with lawmakers loomed.

But Democratic lawmakers have long wanted $US2000 relief checks and used the rare point of agreement with Trump to advance the proposal – or at least put Republicans on record against it – in the vote on Monday.

Trump finally signed the $US2.3 trillion package into law, while still demanding $US2000 checks.

It is not clear how the measure to increase aid checks will fare in the Senate, where individual Republican lawmakers have said the higher amount would add hundreds of billions of dollars to the latest relief bill.

The Senate is due to convene on Tuesday. Senate Majority Leader Mitch McConnell on Sunday made no mention of Senate plans for a vote, after welcoming Trump's signing of the relief bill.

The latest votes come as President-elect Joe Biden accused Trump and his political appointees of obstructing the transition of power, particularly on national security issues, in an escalation in tone after reports of isolated difficulties last week. 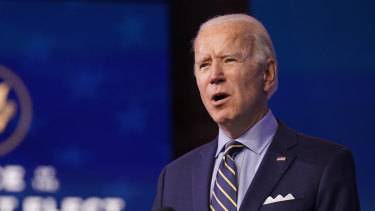 In remarks from his base in Wilmington, Delaware, Biden specifically called out the Office of Management and Budget and the Defence Department as agencies where his transition team had encountered "roadblocks" from political leadership. Biden's remarks came shortly after he attended a briefing with nearly two dozen of his national security advisers.

"Right now, we just aren't getting all the information that we need from the outgoing administration in key national security areas. It's nothing short, in my view, of irresponsibility," Biden said of the resistance his teams was facing. He warned that such delays could allow enemies of the United States to take advantage of vulnerabilities, citing a massive cybersecurity breach that compromised several US agencies earlier this month.

"My team needs a clear picture of our force posture around the world and our operations to deter our enemies," Biden said. "We need full visibility into the budget planning underway at the Defence Department and other agencies in order to avoid any window of confusion or catch-up that our adversaries may try to exploit."

My team needs a clear picture… to deter our enemies

With less than a month before Inauguration Day, Biden has been laying the groundwork for how to tackle the gargantuan twin challenges that he will face as soon as he assumes the presidency – ending the coronavirus pandemic and rebuilding the economy – all against resistance from Trump, who has refused to concede and continued attempting to overturn the election results.

On Monday (Tuesday morning AEDT), Biden said that most government agencies have shown "exemplary" cooperation with his transition team, but that his staff has encountered "obstruction from political leadership" when they could not afford to waste any time