A pair of American B-52 bombers on Wednesday flew another 36-hour round-trip mission over the Persian Gulf from Louisiana in the latest show of force against Iran, the U.S. military’s Central Command (CENTCOM) said in a statement.

The bombers flew nonstop from Louisiana’s Barksdale Air Force Base into the region earlier in the day. Flight-tracking data showed a path over both the Persian Gulf and Saudia Arabia. 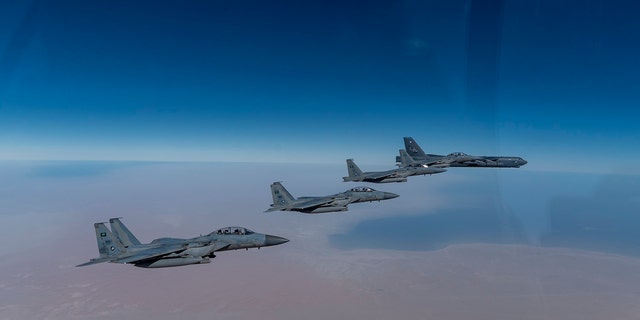 It’s the sixth time since November, and the third time this year, that U.S. strategic bombers have flown deterrence missions near Iran and the first since President Biden took office this month.

“This long-range, short-duration defensive mission was intended to demonstrate the U.S. military’s ability to deploy airpower anywhere in the world to deter potential aggression and showcase the U.S. commitment to regional security,” it said.

“The United States does not seek conflict, but continues to be postured and committed to respond to any contingency around the world,” CENTCOM added, without directly naming Iran.

US EXPLORING NEW BASES IN SAUDI ARABIA AMID IRAN TENSIONS

At the end of 2020, two American B-52 bombers flew a nonstop, 30-plus-hour, round-trip mission from the United States to the Middle East to send a fresh warning to Iran as a senior military official said new warnings had been detected.

Jan. 3 marked the one-year anniversary of U.S. Special Operations forces killing Iranian Maj. Gen. Qassem Soleimani in a drone strike in Baghdad in 2020. A U.S. intelligence report had said Iran wants to “avenge that killing,” according to a senior U.S. military official who had spoken to Fox News and a small group of reporters.

Earlier this month, long-range missiles from Iran splashed down close to a commercial ship in the Indian Ocean and 100 miles from the Nimitz aircraft carrier strike group, Fox News learned, in the latest example of rising tensions in the region.

The Wall Street Journal reported Wednesday that a recent missile strike damaged part of a compound used by the Saudi royal family — an attack that can be blamed on Iran-backed Houthi rebels, which the outgoing Trump State Department designated a terrorist group in the last days of the administration.

Biden has expressed a desire to return the United States to the landmark nuclear deal with Iran that Trump abandoned in 2018.