It comes after clashed erupted in Caracas on Tuesday when opposition leader Juan Guaidó called for a military uprising to remove President Nicolás Maduro from power.

Mr Guaidó who declared himself president earlier this year has also called for massive protests across the country on Wednesday.

In a message posted on his social media accounts on Tuesday evening, he reiterated his call for the armed forces to take his side and said Maduro did not have the military’s support. 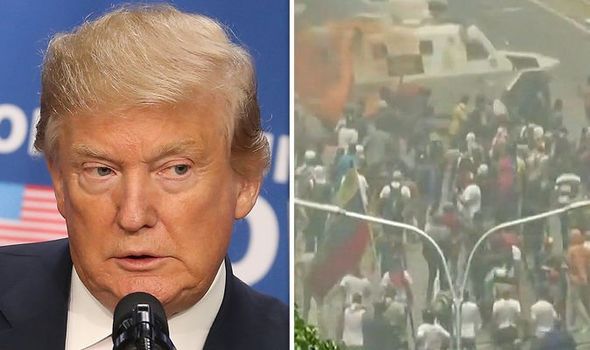 Military action is possible. If that’s what’s required, that’s what the United States will do

US Secretary of State Mike Pompeo

He said: ”Today Venezuela has the opportunity to peacefully rebel

against a tyrant who is closing himself in.”

Violent clashed erupted in the Venezuelan capital with video footage appearing to show Venezuelan National Guard vehicle running over protesters outside of a military base in Caracas.

Mr Maduro insisted the opposition had attempted to impose an “illegitimate government” with the support of the Washington and neighbouring Colombia, claiming Venezuela had been a victim of “aggression of all kinds”.

He appeared in a state television broadcast on Tuesday night alongside by Defence Minister Vladimir Padrino and socialist party Vice President Diosdado Cabello, among others.

The President said: “Today the goal was a big show,” and referred to the military members who sided with Guaido as a “small group.”

He added: ”Their plan failed, their call failed because Venezuela wants peace.”

On Tuesday, the US Secretary of State claimed in an interview that Maduro was prepared to leave the country on Tuesday morning in the face of a call for an uprising by the opposition leader, but reversed his plan after Russia intervened.

When asked to comment on Mr Pompeo’s comments, Maria Zakharova, a spokeswoman for the Russian foreign ministry, told Reuters they were part of an “information war”.

Washington has imposed sanctions to try to dislodge Mr Maduro, and the UK has also sided with Mr Guaido but called for a “peaceful resolution” of the crisis.

Theresa May’s spokesman said: “We have been clear that the UK, alongside its international partners, recognises Juan Guaido as the constitutional interim president of Venezuela until credible presidential elections can be held.

“Our focus is on a peaceful resolution to the crisis and the restoration of Venezuelan democracy.

“Venezuelan people deserve a better future. They have suffered enough and the Maduro regime must end.”