Craig McLachlan has been found not guilty of indecently assaulting a fellow actor during a Melbourne stage show.

The Gold Logie winner, famous for his roles in Neighbours, Home and Away and The Doctor Blake Mysteries, looked towards the ceiling and exhaled when magistrate Belinda Wallington acquitted him of the first two charges on Tuesday.

She then acquitted him of a further three charges, relating to the same woman. 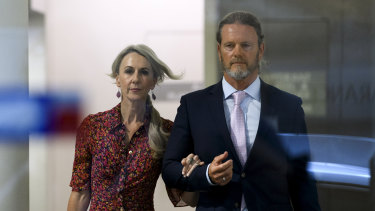 Craig McLachlan leaving his lawyer’s chambers in Sydney in November with his partner Vanessa Scammell.Credit:Rhett Wyman

Mr McLachlan, 55, sat in a room as he watched Ms Wallington deliver her verdicts. The actor watched the verdicts handed down on a video link from an office in Sydney, with partner Vanessa Scammell in the room.

The magistrate is continuing to read her verdict on other charges.

Mr McLachlan was accused of indecently assaulting four women while working on the Melbourne leg of a 2014 stage show.

He pleaded not guilty to seven charges of indecent assault and six of common assault in relation to seven incidents including an allegation he touched one woman near her genitals during a live show while he was hidden from the audience but she could be seen, an allegation he forced his tongue into another woman's mouth during an unscripted kiss, and that he twice kissed another co-star when backstage.

He was also accused of running his hand up the leg of a fourth woman while she was performing in a scene and he was hidden from the audience.

McLachlan maintained his innocence through a contested hearing that began last year.

He denied some of the incidents happened – including the allegations he indecently assaulted the women while they were performing – and maintained those that did were consensual or in the spirit of the show. He and his lawyers argued that McLachlan was given a licence to improvise during the show.

He said the kiss on stage happened but that it was only a brief kiss, no more than one or two seconds on the lips, in keeping with his character and the scene.

Prosecutors argued McLachlan acted in a predatory fashion towards his co-stars and took advantage of a power imbalance given he was a high-profile star, and exploited their vulnerability given the scenes the women were in.

They also presented examples of sexualised comments, dirty jokes and physical actions including kisses and hugs that they said constituted inappropriate conduct towards the women.

But McLachlan's lawyers argued for their client to be found not guilty because a reasonable doubt existed in relation to all charges.

They submitted the women were unreliable witnesses whose accounts were inconsistent, fabricated and possibly the result of collusion from discussions in the years afterwards.

They also argued there was an overtly sexualised atmosphere among cast members during the Melbourne leg of the show that included physical pranks, hugs and kisses instead of saying hello and goodbye, actors sitting on each other's laps, a constant stream of dirty jokes and insincere remarks about their admiration and love for each other.

The actor has also begun defamation action against The Age, The Sydney Morning Herald, the ABC and one of the women over news reports last year that alleged he engaged in sexual misconduct, harassment and indecent assault during the production.

The defamation proceedings were adjourned until the criminal case was completed.