Two soldiers from different conflicts and different generations are united in reflection on the legacy of war when they attend the Remembrance Day service at the Cenotaph in Martin Place on Thursday. 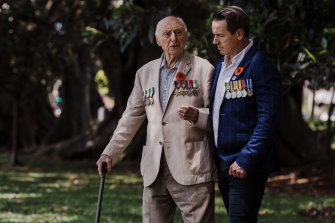 Private Brightwell from Dover Heights in Sydney’s east was called up at 18 and served briefly as an artillery surveyor in Mililat, New Guinea. Like many he was stricken by malaria and dysentery. He was invalided out in August 1944 before the war ended, a skeletal and mental shadow of his former self.

“My father Arthur Brightwell was in the artillery with horses on the Western Front and I took his advice,” Private Brightwell said. “He said go for the artillery, you aren’t the brutal type that should be in the infantry.

“I haven’t got dementia, loss of memory occasionally, but not dementia as I understand it. If you want to keep your sanity you have got to try and mix with your fellow humans.”

Sergeant Jones, 40, went to Afghanistan in 2008 in a logistic role with the 2nd Commando Regiment. He said he found his time there confronting. “I was behind the wire so wasn’t going out gun fighting like other guys were,” he said.

Sergeant Jones from Mascot, active at Coogee RSL, now works in safety management. “Ten minutes ago I didn’t know John, now I feel John is like my dad,” he said. “You can tell that Remembrance Day is going to be a special day for him.” 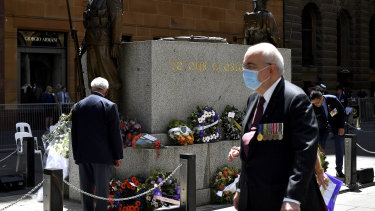 Sergeant Jones said he knows about half of the 15 Afghanistan and Iraq veterans invited to the service in Martin Place recognising Australia’s withdrawal from Afghanistan.

“Everyone is proud of their service, everyone went there for the mission they were given at the time and certainly, they were fortunate to come back,” he said of the exit. “Unfortunately, some people didn’t. Some close mates are dealing with mental health issues.”

RSL NSW president Ray James said their plan is focused on meeting the needs of younger veterans, particularly those who have served in the Iraq and Afghanistan conflicts.

“Millions of Australians have personal connections to our nation’s significant military history, either as a current or former serving Defence member or as the relative of someone who served. Australia’s shared history binds us; it strengthens our sense of identify and unifies us,” he said.

“We must continue to honour the dead but fight for the living as we support all veterans and connect them with the mateship, camaraderie, and services they need.”

Natalie Ward, Minister for Veterans, said Remembrance Day is a time to reflect “on the sacrifices made” courageously across generations for Australia.

“Our veterans from conflicts and peacekeeping operations around the world share an unbreakable bond of honour, respect and camaraderie,” she said.