Victoria recorded 1003 COVID-19 cases and 14 deaths a day after dozens of anti-vaccine mandate protesters rallied on the steps of Parliament to protest against the state government’s proposed pandemic laws.

Victorian Chief Health Officer Brett Sutton and COVID-19 response commander Jeroen Weimar had to be escorted by police as they left the Parliament after protesters hurled abuse at the pair. 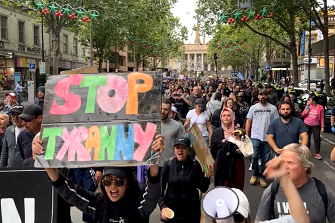 The crowd marched through the streets of Melbourne’s CBD chanting “kill the bill” and “sack Dan Andrews” under the watch of a dozen police officers.

They were addressed by Victorian Shadow Treasurer David Davis and Liberal Democrat David Limbrick, who took to the podium to denounce the legislation as a government power grab.

“I say, what on Earth do they have to hide? And now, after the use of the state of emergency powers again, and again, and again, for the longest lockdown in the world, Andrews and his government want even more power,” Mr Davis said.

Police said the protest had been peaceful and no arrests had been made.

The legislation, which has been lashed by barristers, passed the lower house last month, but it is likely to be subject to crossbench amendments when it reaches the upper house in the coming days.

Premier Daniel Andrews has previously defended the legislation, saying it will provide more transparency, accountability and oversight to the government’s decision-making.

The protest comes after attendees at a Melbourne Cup victory party were told to isolate after being identified as close contacts of three partygoers who later tested positive for coronavirus.

There are concerns the virus could have spread among the more than 100 revellers at the event last Tuesday, with reports up to 15 people celebrating Verry Elleegant’s win have tested positive.

To date, three jockeys who attended the event at Society restaurant on Collins Street, including McDonald, have returned negative tests.

Federal government data released in the afternoon showed 90.12 per cent of NSW residents aged 16 and above were double-dosed while 93.97 per cent had received at least one dose of the vaccine.

The state, which is the second Australian jurisdiction after the ACT to achieve 90 per cent, has now shifted its focus to obtaining a 95 per cent immunisation rate.

More than 84 per cent of Victorians aged 12 and over are fully vaccinated, putting the state on track to further ease restrictions on those who’ve had their jabs later this month.

Mr Andrews confirmed on Tuesday that unvaccinated Victorians will be locked out of most venues from November 24, putting an end to a grace period that had allowed them to shop for non-essential retail since restrictions lifted on October 29.

There were 71,601 coronavirus tests processed on Tuesday, while 10,778 people received a coronavirus jab at a state-run vaccination hub.

There are now 15,031 active coronavirus cases in the state. Of those, 471 remain in hospital with 84 in intensive care and 46 patients on a ventilator.