Faces of the dead: The macabre trend for Victorian family photos… when one of the loved ones was already dearly departed

Dressed in their Sunday finest with glum looks on their faces, these children look no different to any other line-up of bored youngsters told to pose for a family photograph.

But to the unknowing observer, the haunted eyes of the children hide a sinister secret. The little sister on their left is dead.

Propped up with a stand, the youngest of five siblings wears a dress, her closed eyes could be an unfortunately-timed blink… but is in reality the only giveaway that something is not quite right.

The child is one of many who were pictured after their deaths during the Victorian era, with the unsettling art of death photography providing families with a memento of their lost loved ones. 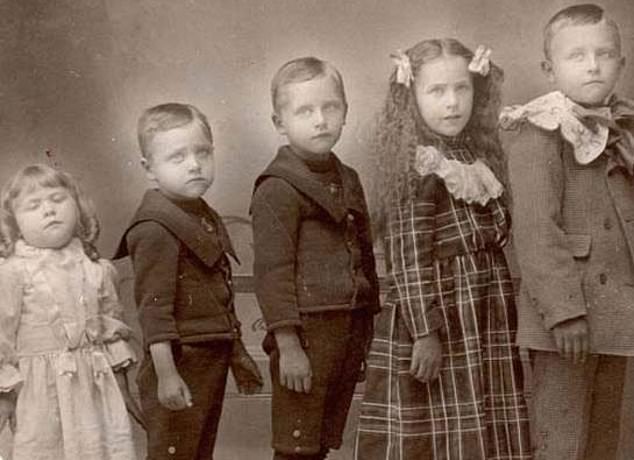 Dressed in their best clothes with rather glum looks on their faces, these children look less than pleased to be posing for a family photograph. But the youngsters are likely disturbed by the fact that their sister (far left) – apparently standing next to them – is dead 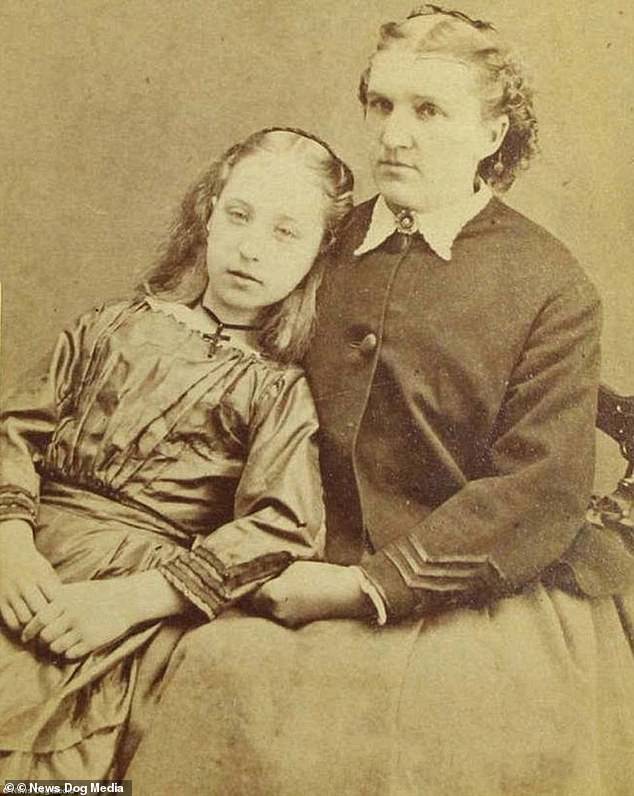 The unsettling art of death photography during the Victorian era  provided families with a memento of their lost loved ones. Above: A mother is pictured here holding her deceased daughter, circa 1904

The photos were taken during a period when death was far more common than it is now. Epidemics including diphtheria, typhus, cholera and tuberculosis were major killers of both children and adults.

At a time where the average life span was only around forty years, it is perhaps unsurprising that the Victorians embraced the reality of the death.

Death portraiture was just the latest form of memento mori – which literally means in Latin ‘remember you must die’.

In traditions stretching back centuries, locks of hair would be cut from the dead and worn in lockets and rings, death masks were created in wax and paintings depicted the morbid.

Death photographs were first taken after the invention of the daguerreotype – the earliest photographic process – in 1839.

Daguerreotypes were used to capture the image of famous people like Abraham Lincoln, Ulysses S Grant and Robert E Lee.

Whilst still expensive, death photography was far cheaper and quicker than commissioning a painted portrait and enabled the middle classes to have an affordable keepsake of dead family members, often children.

Death portraiture then increased further in popularity as photography technology improved from the mid 19th-Century onwards, making the process much cheaper.

Depictions after death were often the first time families had taken advantage of photography.

Whilst the dead were sometimes pictured in their open coffin, they were often made to look alive as they were posed with open eyes alongside living relatives. 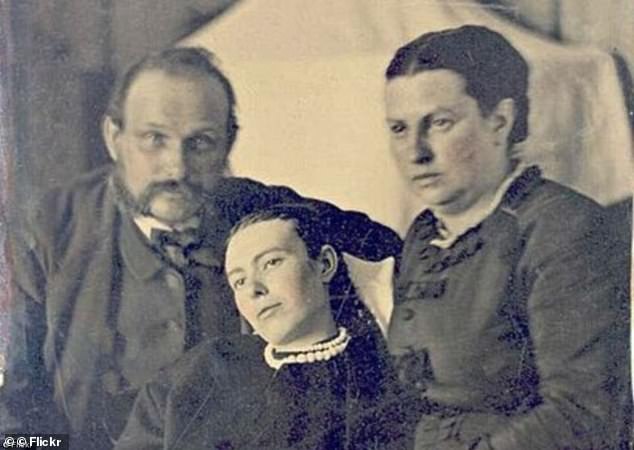 Death photographs were first taken after the invention of the daguerreotype – the earliest photographic process – in 1839. Above: A husband and wife pose with their dead daughter. It is not clear when or where the image was taken 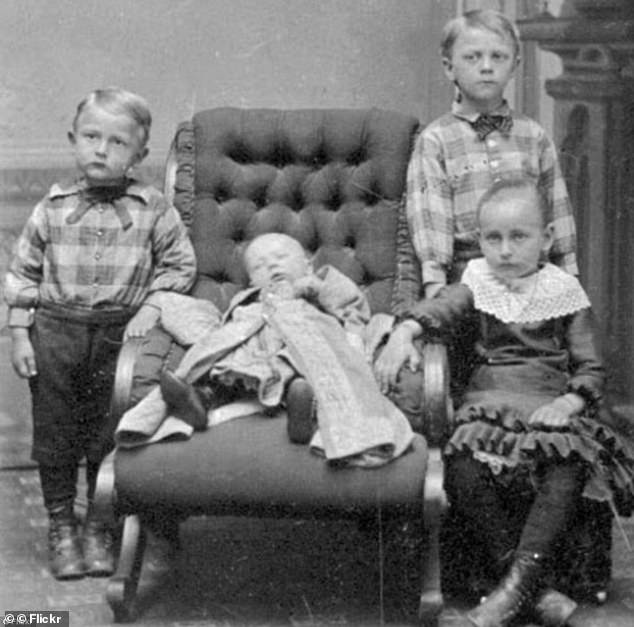 Whilst still expensive, death photography was far cheaper and quicker than commissioning a painted portrait and enabled the middle classes to have an affordable keepsake of dead family members, often children 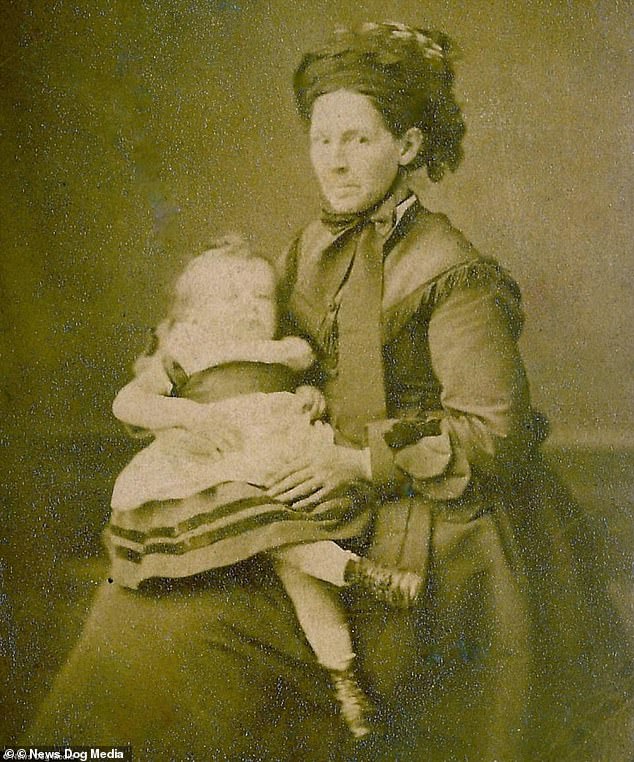 Death portraiture increased further in popularity as photography technology improved from the mid 19th-Century onwards, making the process much cheaper. Above: A mother poses with her dead child 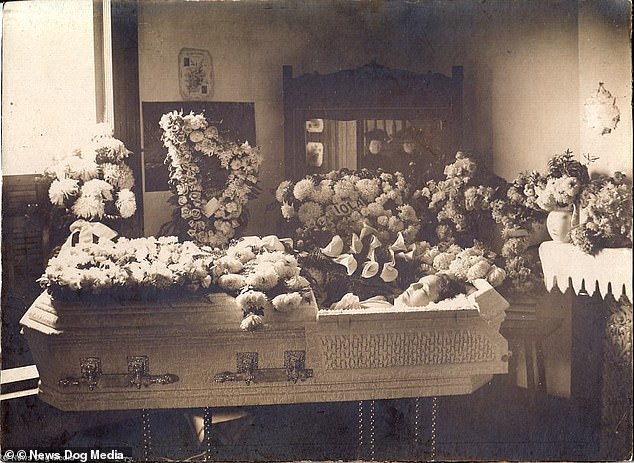 As well as being made to look alive, with their eyes open, the dead were also photographed in their coffins, with the lids open to reveal their corpse. Above: Two women are seen in the reflection of a mirror as they look at the dead child in front of them 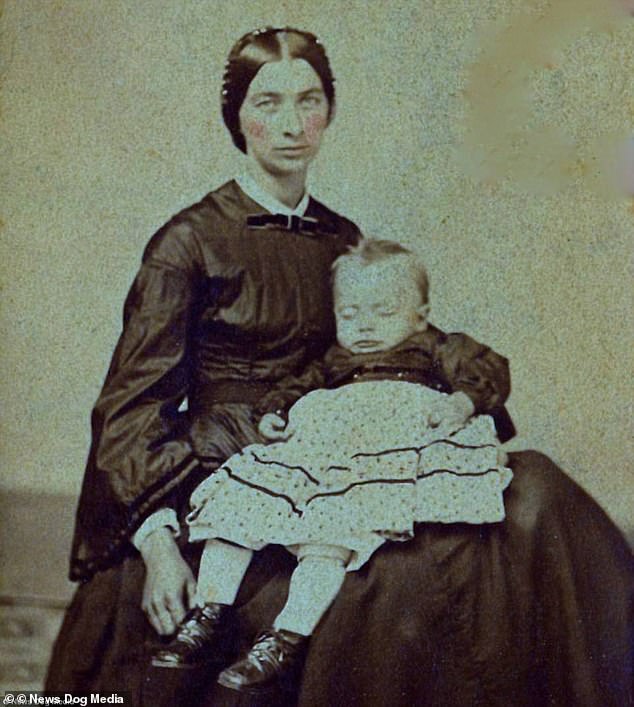 Children were often photographed in their parents’ arms. Above: A dead youngster is seen propped on his mother’s lap 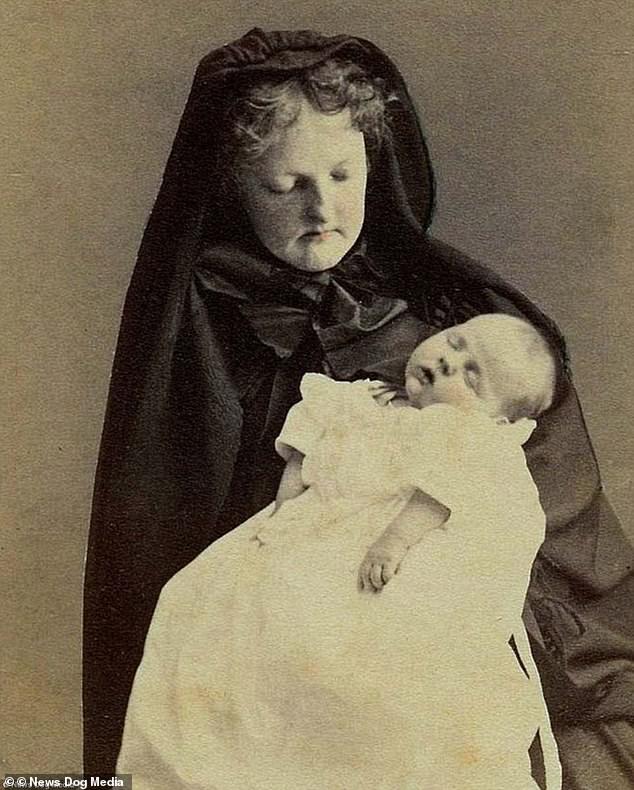 The practice of death photography declined dramatically as life expectancy for children improved and the reduced cost of taking and developing pictures made it far cheaper for images to be captured in life instead. Above: A mother with her dead child 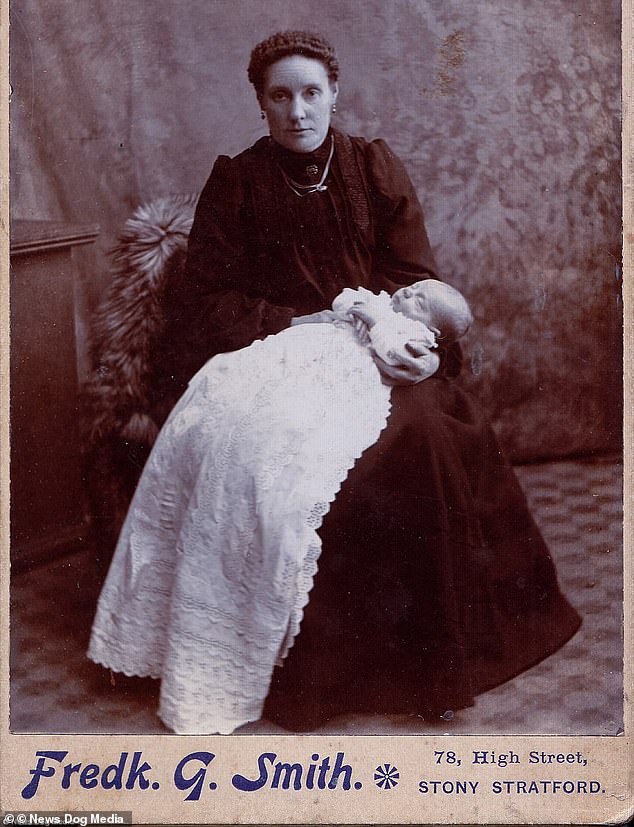 With the Victorian era defined by high mortality rates, a post-mortem photograph provided families with their only record of their loved one. Above: A mother poses with her dead baby in her arms

Children were often shown in repose on a couch or in a crib, while adults were more commonly posed in chairs.

An alternative to a subject’s eyes being propped open saw pupils painted on to the printed image of a dead relative. Rosy tints were even added to the cheeks of corpses.

The practice of death photography declined dramatically as life expectancy for children improved and the reduced cost of taking and developing pictures made it far cheaper for images to be captured in life instead.

The 2005 book the Oxford Companion to the Photograph, which was edited by Robin Lenman, described post-mortem photography at length.

It noted how ‘it was not unusual for Victorian photographers to advertise their particular skills in this area of photography.

‘Post-mortem daguerreotypes, especially of children, survive in quite large numbers and are now sought-after collectors’ items,’ it continued. 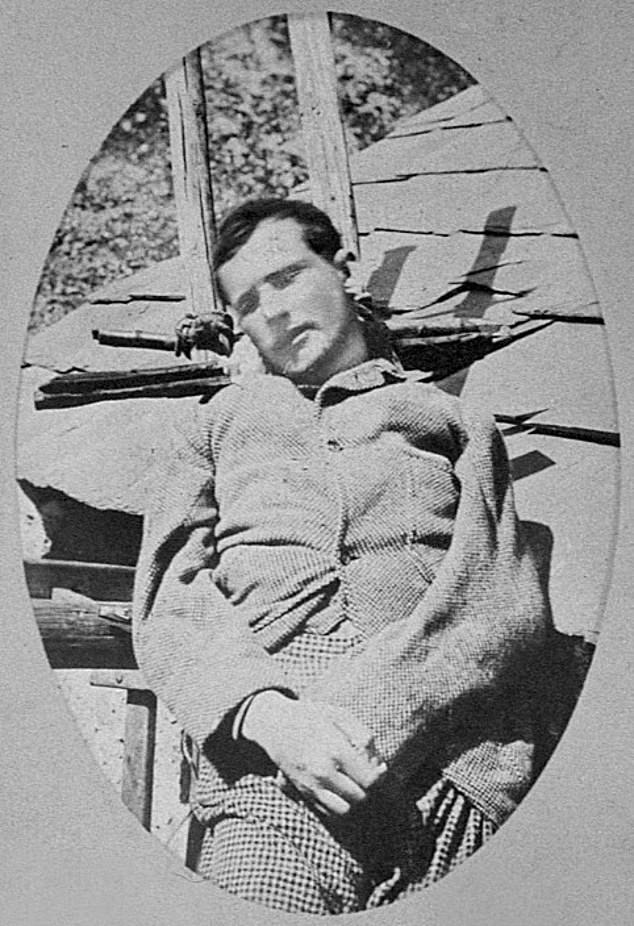 Death photography provided a way for the Victorians to remember their loves ones. Above: A dead man is seen propped up for a photo 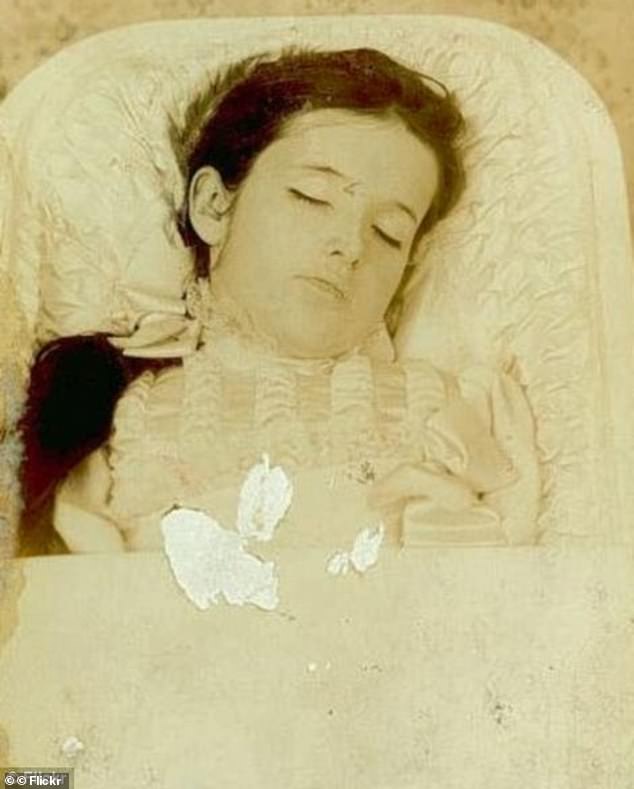 A young girl who has recently passed away is seen lying in her open casket. The child was one of many to be photographed by Victorian relatives after their deaths 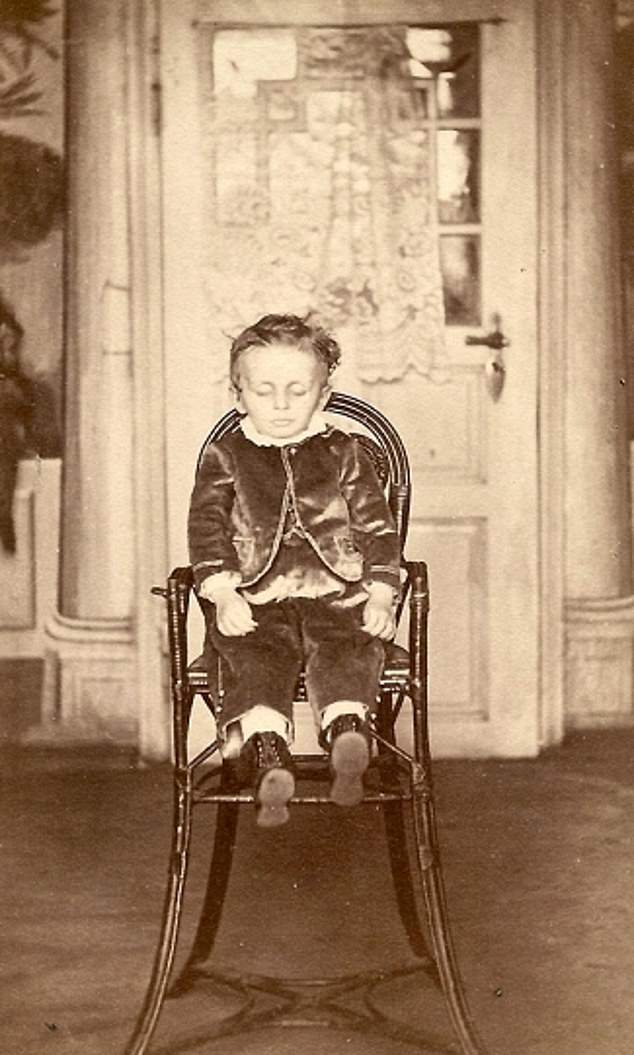 A dead child is seen dressed up and propped up on a chair in another death photograph. It was commonplace for loved ones to be positioned as though they were alive 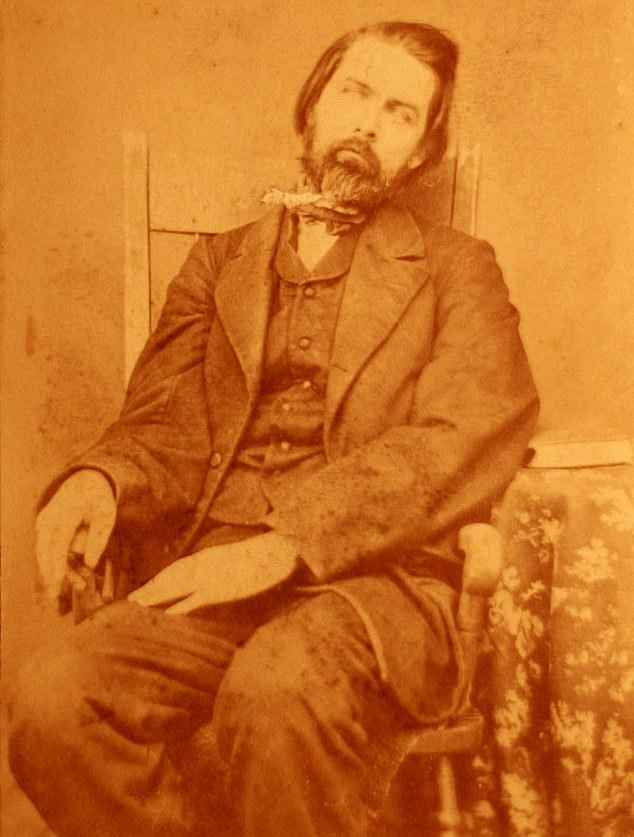 A dead man is seen propped up on a chair in another post-mortem photograph. The image was one of thousands taken of loved ones after their deaths 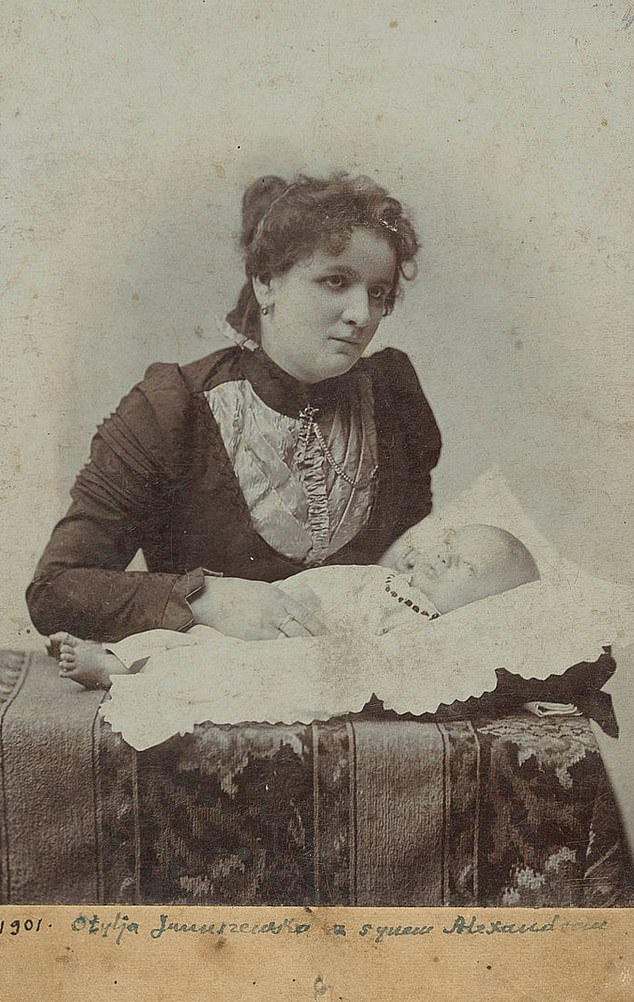 During the Victorian era, the infant morality rate was much higher than it is now and so many families had to cope with the loss of their children. Above: A mother poses with her dead child in 1901 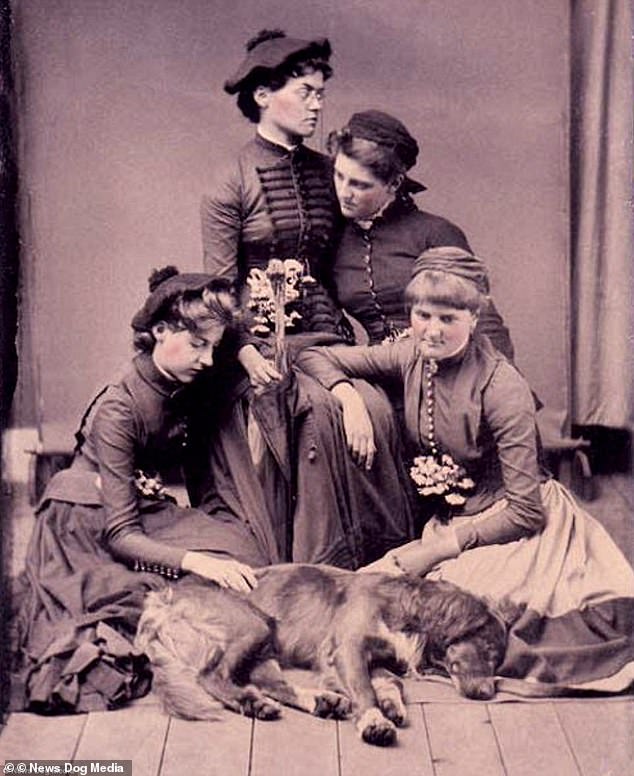 A Tintype showing four girls mourning their dead dog, laid to rest between them, circa 1895. The rose tint can be clearly seen on their cheeks 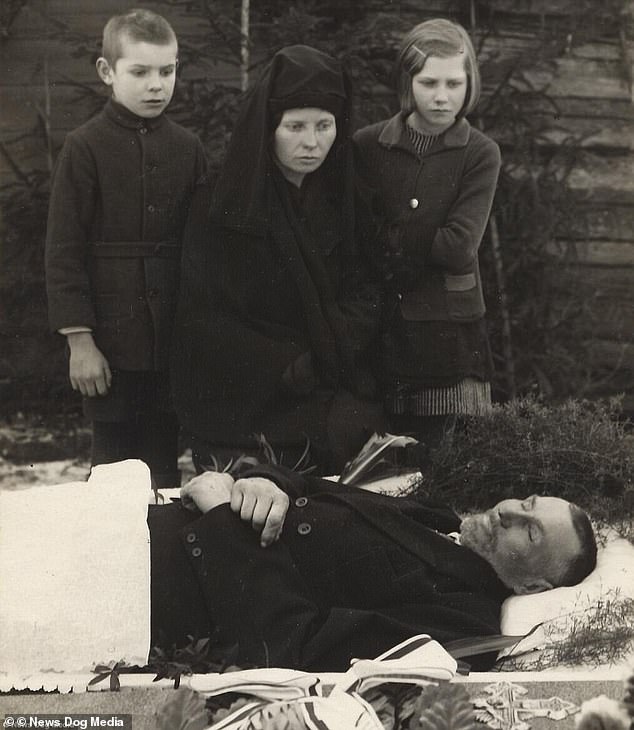 Children are seen flanking their mourning mother as they look at their father’s dead body, which is lying in an open casket

‘Often the subject is carefully laid out as if asleep, perhaps in a crib, or in the arms of bereaved parents, and beautifully dressed: a final presentation to the world.

‘In a period of high mortality the deathbed photograph, frequently by an anonymous local photographer, might be the only record of the deceased.’

It added: ‘Attitudes to photographs of the dead shift with attitudes to death itself and respect for the integrity of the individual.

‘The post-mortem and memorializing functions of photographers are related to photography’s inherent indexical qualities, its inherent ability to secure the shadow as the substance fades, to cheat the finality of death.

‘Alternatively they remind us of the fragility of life.’