Daniel Andrews' announcement on Monday that he intended to ask Parliament for a 12-month extension to the state of emergency provisions has come as a blow to many and increased discontent with the Premier’s general handling of the crisis – and current lockdown measures in particular. 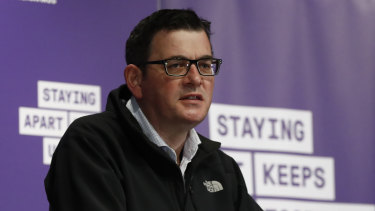 The powers the Premier is asking for the next 12 months are very broad, and deserve to be treated with scrutiny.Credit:Getty

This is understandable: the powers the Premier is asking for the next 12 months are very broad, and deserve to be treated with scrutiny and a degree of scepticism. And the announcement, coming as it does in the midst of the current lockdown, is a lot for people to bear.

What Victorians need right now is a much better sense of timing from the Premier. To achieve this, he should announce transparent criteria for when he intends to end the current lockdown, and a move to category three or even category two restrictions.

Unfortunately, that end cannot involve a strict timeframe: lockdowns have to continue until the virus is effectively under control, if we are to protect both public health and the chance of a full economic recovery.

And is not possible to predict exactly when that will occur. It depends on the best guess of epidemiologists and other medical experts about “R” or the so-called “reproduction rate” of COVID-19 – a parameter that, one of us has shown in a new study, is surrounded by unpredictability. But governments can commit to targets involving a stable seven-day average of new cases under a certain level (perhaps 20 or even 30 new cases a day), which everyone can see and understand, as a credible commitment to ending the lockdown when it is no longer necessary.

The good news is that talks to this effect are apparently already under way, but they need to be fast-tracked to give Victorians greater certainty about what to expect in the weeks and months ahead.

Most Australians are pretty resilient, and willing to sacrifice a lot for their families and communities – including freedom of movement, education and employment opportunities, for the greater good.

But they are also fundamentally uncertainty averse: experiment after experiment shows that humans prefer certain to uncertain outcomes.

That is why the Premier needs to announce a clear end to the current lockdown – based on agreed seven-day new case averages, informed by medical advice and appropriate public scrutiny.

This increased certainty would also have the benefit of encouraging those currently wavering about compliance to do the right thing; it makes very clear what the collective stakes are of failing to comply with current policies to bring new infections down.

And while it would put more pressure on Parliament to act, and act fast, in September, the Premier should ideally delay his attempt to renew the current emergency powers regime until after these targets have been agreed and announced. Doing so would soften the sense of uncertainty Victorians are currently feeling.

And it would make it easier to trust the Premier that he really does mean that the emergency powers provisions are only there as a safeguard, if the announcement were made at a time of lifting rather than continuing restrictions.

We are strong advocates of hard lockdowns as a response to the COVID-19 pandemic, but partly because they offer the prospect of short, sharp and overwhelmingly effective response — compared to one that lasts much longer and is far less effective.

A strong response to COVID-19 is also one that contains credible and publicly knowable and debatable time limits and is linked to notions of accountability and proportionality.

It is time the Premier realised that, and changed course on the timing of his announcements.