Much of David W. Nagy's obituary, which ran in his local paper in Jefferson, Texas, on July 30, recounted his painful death from the novel coronavirus at age 79 and named his surviving family members.

But midway down, the tone shifted to offer a pointed message for President Trump and Texas Republican Governor Greg Abbott. 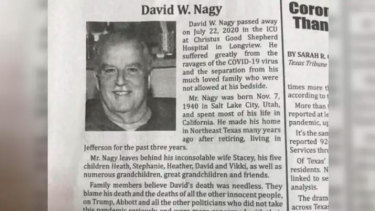 The obituary for David W. Nagy in Texas blames Donald Trump’s response to the pandemic for his death.

"Family members believe David's death was needless," his wife, Stacey Nagy, wrote. "They blame his death and the deaths of all the other innocent people, on Trump, Abbott and all the politicians who did not take this pandemic seriously and were more concerned with their popularity and votes than lives."

Stacey also scolded people who don't wear masks, describing them in the obituary as "ignorant, self centred and selfish people" who ignore medical professionals and instead believe that "their 'right' not to wear a mask was more important than killing innocent people."

As coronavirus cases keep climbing and some states have been slow to implement mask orders, Nagy said she felt compelled to use her husband's final message to push for change.

Then it went viral. Pictures of the obituary, which isn't online, have been re-shared tens of thousands of times on Twitter and Facebook. 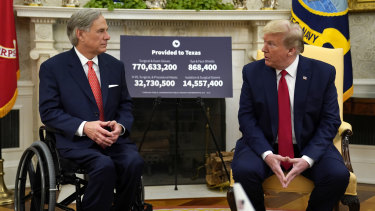 US President Donald Trump speaks during a meeting about the coronavirus response with Texas Governor Greg Abbott.Credit:AP

"It's because of their carelessness, and because of our politicians not getting control of this thing is why so many people are dying. I was just very, very angry. That's why I wrote it and I meant everything I said in it."

Stacey and David had been married for 20 years. The couple lived in California until a few years ago, when David retired and they sought a more affordable lifestyle in northeast Texas.

When the pandemic started spreading throughout the country, Stacey said she became increasingly nervous for David, who she said had a bad heart, high blood pressure and diabetes.

"I didn't want him to get it because I was afraid it might kill him," she said.

But in late March, after a series of falls, David was taken to a hospital for treatment and eventually to a nursing home for recovery.

At the time Jefferson had only three coronavirus cases, Stacey said. And when it came to decide if it was safer to bring David home or keep him in the nursing home, she and David's son decided he'd be safer away from home. Stacey was worried that she might bring home the virus after a trip to the grocery store.

The separation was hard on the couple since the nursing home forbade visitors. Every week Stacey went up to his window and tried to talk with her husband through the thick glass.

"When it was time to go, we'd put our hands up to the glass together and kiss on the glass," Stacey said.

Hopefulness soon turned to dread when David started feeling ill in early July. He tested positive for the virus – and so did at least 16 other patients.

"Here I thought I was doing the right thing keeping him safe by keeping him there and he ends up getting it," Stacey said. "It was devastating to me, and to say I was angry is putting it mildly. And so that's why I blame all these other people because the disease did not have to get out control like it is."

Obituaries with political messages have been on the rise during the pandemic.

In July, the daughter of a man who died of COVID-19 penned a blistering obituary in the Arizona Republic, writing that her father's death was "due to the carelessness of politicians who continue to jeopardise the health of brown bodies." In an interview, the daughter accused Arizona Republican Governor Doug Ducey of having "blood on his hands."

An obituary in the Citizen-Times in Asheville, North Carolina for Sandra Shuler Thomas in July encouraged mourners to use her death as motivation to vote in the upcoming presidential election. "In lieu of flowers, think of Mrs. Thomas while casting your vote to remove President Trump from office," it said.