The battle against the coronavirus scourge is being waged in village halls and community centres across Britain as an army of volunteers and NHS staff provide vaccines for the most vulnerable in society.

As so often in the past, the trojan efforts of small groups of ordinary people are helping to bring the nation back from the brink with their determination, courage and sheer Blitz spirit. Many are sacrificing their time – and annual leave – to ensure vital jabs are given to the most elderly and vulnerable.

The usual yoga classes and Weight Watchers meetings at the Nevendon Community Centre in Wickford, Essex, have been on hold since the town was placed under stringent tier 4 restrictions. 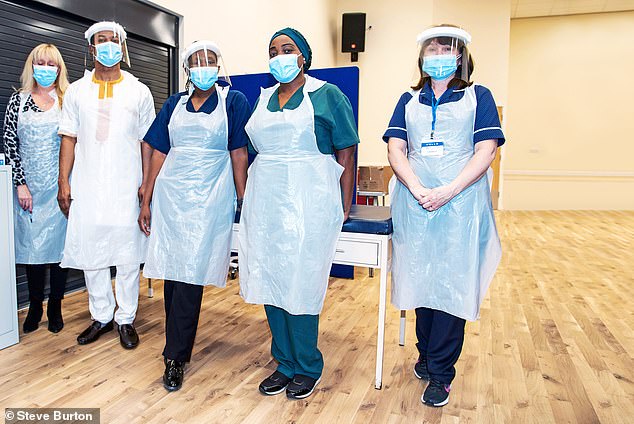 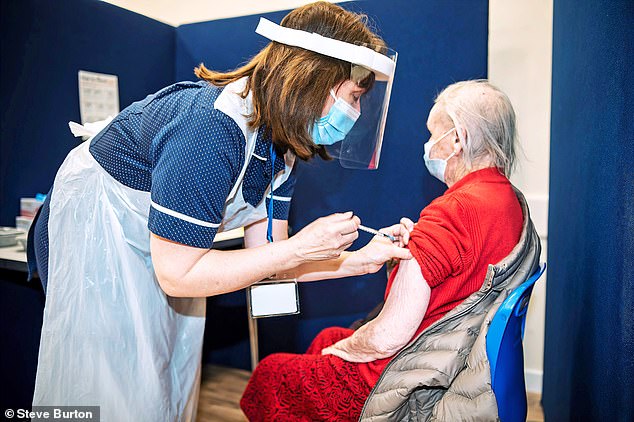 Margery Fairley, 93,  receives her vaccination from nurse Jackie Dobson at the makeshift clinic

GPs have now converted the spacious hall into a makeshift clinic. On New Year’s Day, as many endured the morning after the night before, Dr Olugbenga Odutola and his team were up early to open the centre at 8am.

The softly spoken GP, who wore a traditional African robe under his medical gown and PPE, said he and many of the NHS staff were sacrificing precious holiday time to be there. 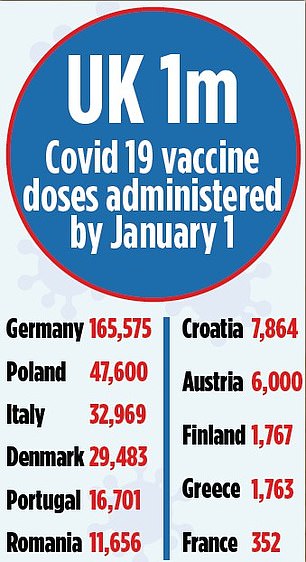 ‘Everyone involved understands what a big step forward the vaccine is,’ he said. ‘It is about giving people hope. That is vital and is why many people have given up their own time to help out.’

The doctor and his team of 11 nurses, pharmacists and administrative staff had given jabs to 2,500 people – many of them pensioners most at risk of dying from the virus – over the course of four days.

In the car park, Rotary Club volunteers helped direct arrivals before they queued in the cold for their jab. As elderly couples held hands waiting patiently for their turn, there was an undeniable atmosphere of hope that the endless cycle of lockdowns could soon be over.

The wooden floor of the brick-built community centre is marked out for badminton and table tennis. Now it is divided by blue clinical screens to give privacy. Each patient spent around 20 minutes at the centre.

First, they had their temperature taken and answered a screening questionnaire to check they did not have any symptoms of coronavirus.

Having the jab took seconds, after which each recipient was asked to remain at the centre for ten further minutes to make sure there was no adverse reaction. So far there have been none, Dr Odutola said.

‘I didn’t feel a thing,’ declared Margery Fairley, 93. Displaying the stoicism and steely determination typical of those who lived through the Second World War, she added: ‘I am very pleased that I was able to get it done. I have tried not to worry about Covid too much and to carry on as normal as much as possible, but I am very pleased I have got it.’

Her daughter, Elsbeth Harris, 60, expressed her relief. ‘You can’t help but worry. The family are delighted. Hopefully it will mean we can mix more freely when restrictions are eased.’ 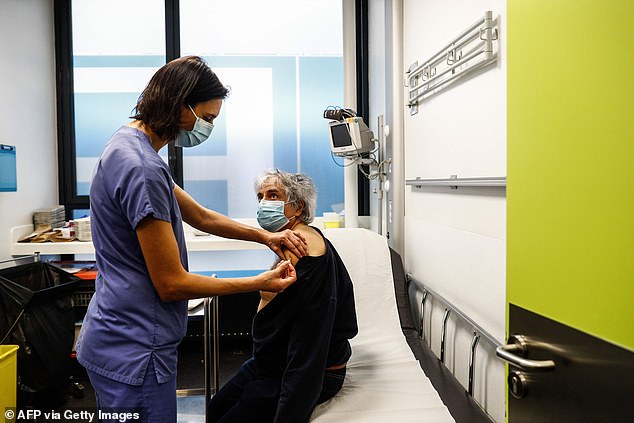 A nurse administers a dose of the Pfizer-BioNTech Covid-19 vaccine at the hospital Hotel-Dieu in Paris. France had only administered 352 doses by the turn of the year

Margery is among more than a million people to have received a jab in the UK since the first in the world was given to Margaret Keenan, 91, on December 8 at University Hospital, Coventry.

At another community centre, in Woodford, Essex, doctors worked throughout yesterday to vaccinate 975 pensioners. Ten staff from GP surgeries began ringing patients on New Year’s Day after the Government told them they would receive their jabs. Around 100 patients got the call only yesterday morning, giving them barely any notice but most answered the call to brave chilly weather and have the jab.

Retired electrical engineer John Beves, 82, went with wife Irene, 81. He said: ‘We were in and out within 30 minutes which was amazing. Now we are looking forward to getting back to some sort of normality.’

Volunteer Fiona Pleasant, 61, a retired primary school teacher, gave out tickets to allocate patients to a bay, called their numbers to go forward and disinfected chairs in a waiting area when they were used.

The mother-of-two said she was delighted to help, adding: ‘The elderly people who are coming in are generally very calm and relaxed and just happy to be given their slot. Very few of them seem anxious which is amazing because some of them have not been out since March. They are tremendous.’

Those vaccinated so far have been by appointment only, arranged via their GP. People over 80 and key workers have priority. They all had the Pfizer-BioNTech vaccine, which is stored at minus 70C, but the Oxford jab, which can be kept in a household fridge, will allow many more village halls and community centres to open as vaccine hubs from tomorrow.

Despite the red tape, more than 10,000 volunteers and medics have been recruited. They include retired teacher Bob Plimmer, 74, who was directing traffic in the car park in Wickford on New Year’s Day. He said: ‘There is finally some light at the end of the tunnel.’