Have a seat, Ursula! Von der Leyen greets Charles Michel before sitting down for ceremonial signing and EU summit – a month after he left her humiliated with ‘Sofagate’ blunder

Ursula von der Leyen was sitting pretty today as she got her own chair for a ceremonial signing at an EU summit in Portugal – just a month after a lack of chairs in Turkey led to allegations of sexism and sabotage.

The commission president was seen bumping elbows with Charles Michel, the man who took the only seat in Istanbul, just moments before the signing took place.

Von der Leyen, who was left perched on a sofa at the Turkey summit in a row dubbed ‘Sofagate’, appeared in good spirits in Porto as the new meeting got underway.

EU leaders are holding their first in-person meeting since the pandemic broke out to discuss issues facing the bloc, with gender on the agenda – just as it was in Turkey. 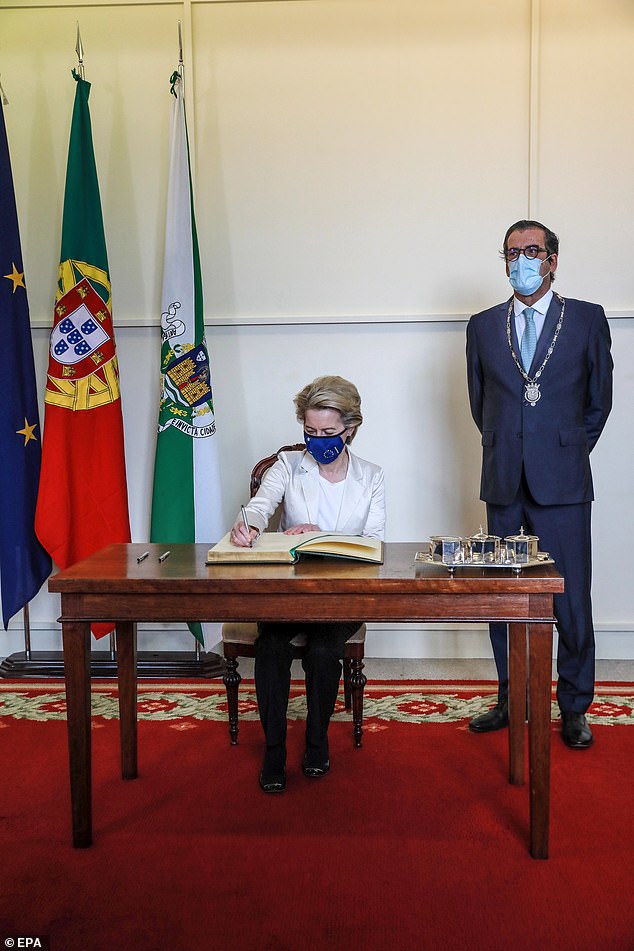 President of the European Commission Ursula Von der Leyen signs the honor book followed by the mayor of Porto Rui Moreira during a ceremony to present the keys to the city of Porto at Porto City hall, Portugal, on Friday 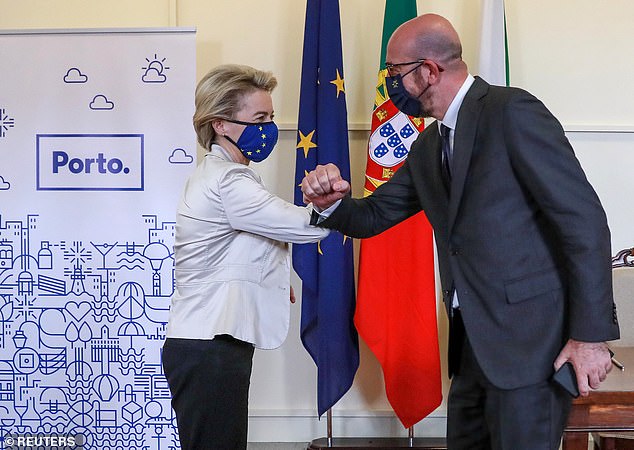 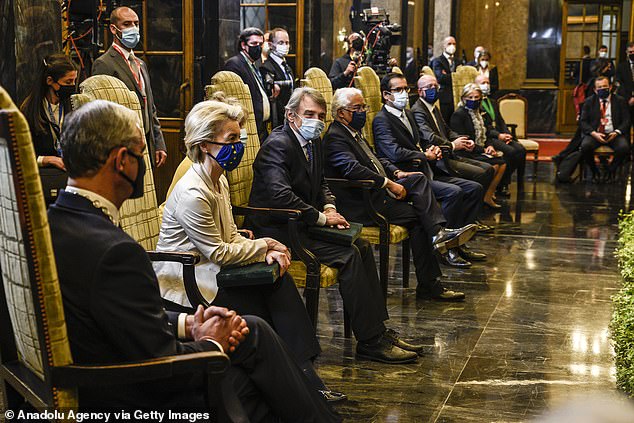 The incident last month led Turkey to strongly reject claims it snubbed von der Leyen because of her gender.

The images drew intense criticism at the time on social media and accusations of gender discrimination with a ‘sofagate’ hashtag trending. It was quickly pointed out that in previous meetings in Turkey when both EU representatives were male, both were offered seats. 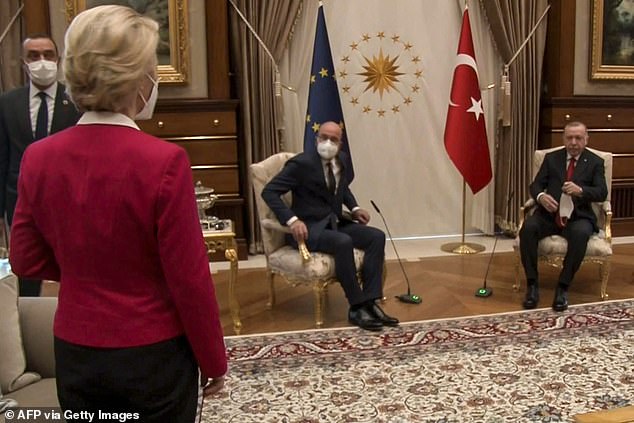 The European Commission hit out April 7, at a diplomatic snub that left its head Ursula von der Leyen without a chair as male counterparts sat down at a meeting with Turkish President Recep Tayyip Erdogan

Poland and Hungary battled today to exclude the term ‘gender’ from the final conclusions of an EU summit devoted to promoting equality and fighting poverty in Europe, diplomats said.

The fight is a recurring one in EU official circles, with the culturally conservative governments in Warsaw and Budapest seeing the term as ideologically loaded and creating space to promote rights for LGBT people.

‘Poland always underlines how important legal clarity is, and that we should stick to treaty regulations,’ a Polish official said on condition of anonymity.

‘The Treaty of the European Union very clearly refers not to gender equality but to equality between women and men,’ the official added.

In the latest version of the draft conclusions, set to be adopted on Saturday, the leaders agreed to ‘promote equality and fairness for every individual in our society’.

The draft, seen by AFP, adds that the EU will ‘work actively to close gender gaps in employment, pay and pensions’. 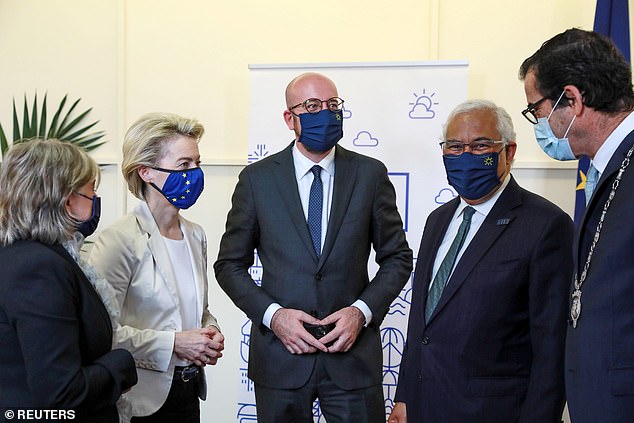 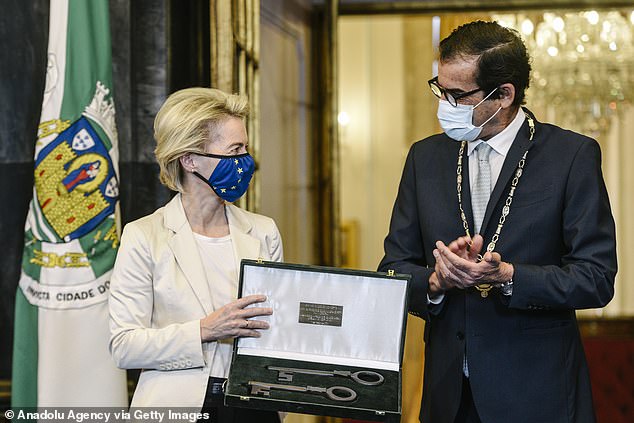 This was seen as a small victory for countries that took up the fight against the eastern Europeans.

‘On the one hand, Hungary and Poland did not want the term ‘gender’, while on the other hand, for Finland, Austria and Spain, the term ‘gender equality’ was non-negotiable,’ a diplomat said.

‘We finally found a compromise solution.’

Poland’s populist government has compared the struggle for LGBT equality to communism in terms of the alleged threat it poses to national values.

In Hungary, the government has sharpened its anti-LGBTQ rhetoric in recent months, with Prime Minister Viktor Orban demanding in October that the community should ‘leave our children alone’.

European Union leaders are meeting in person for two days of talks in Portugal, in a sign that they see the threat from Covid-19 on the continent as waning amid the vaccine rollout.

The talks are aimed at repairing some of the damage the coronavirus has caused in the bloc in areas such as welfare and employment. 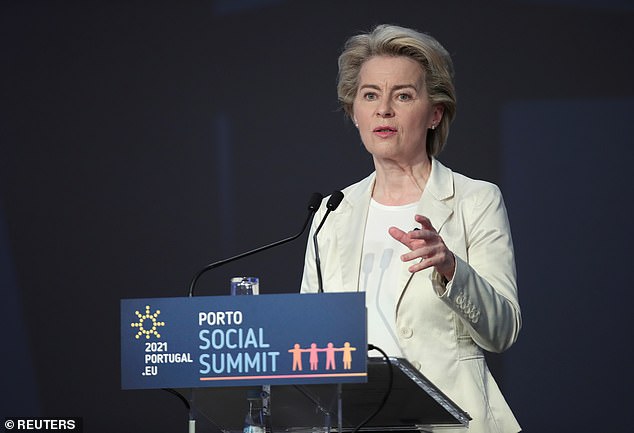 In a late addition to their agenda, EU leaders will also discuss Thursday’s US proposal to share the technology behind Covid-19 vaccines to help speed up the end of the pandemic.

The leaders will also take part in an unprecedented meeting, via videoconference, with Indian prime minister Narendra Modi, whose country needs more help with a devastating virus surge – and who can smooth the path to an elusive bilateral trade deal.

Covid-19 has forced high-level political talks to move online over the past year in Europe.

This is the 27-nation bloc’s first face-to-face summit in five months, after an exceptional meeting in Brussels last December to discuss post-pandemic spending.

Another in-person summit, in Brussels, is planned for later this month.

EU leaders appear keen to ‘try and convey a sense of normalcy, of slowly returning to normal’, according to Antonio Barroso, a political analyst at Teneo, a global advisory firm.

That is a key consideration for southern EU countries like Portugal, Spain and Greece, where tourism is an economic mainstay.

Despite a slow start to its inoculation drive, the EU this week passed the milestone of 150 million vaccinations and reckons it can reach what it calls ‘sufficient community immunity’ in two months’ time. 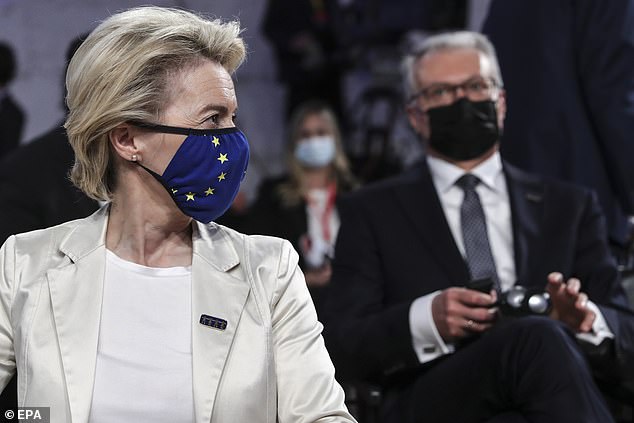 Ursula von der Leyen during the opening ceremony of the EU Social Summit with Heads of State and Government, social partners and other participants held at Alfandega do Porto in Porto, Portugal

The European Commission proposes relaxing restrictions on travel to the bloc this summer.

Who is able to move around remains a sensitive question for Europeans, however, with pandemic improvements having been uneven across the continent, and many Europeans remaining subject to restrictions.

In a political nod to those concerns, German chancellor Angela Merkel and Dutch prime minister Mark Rutte will not travel to Portugal.

And as a reminder of the risks, Maltese prime minister Robert Abela will not be attending because he is in quarantine after his wife tested positive on Wednesday.

Pandemic fundamentals remain unchanged: those attending the summit must show negative PCR tests for Covid-19, while social distancing and mask-wearing are required.

The summit will make a splash in the picturesque Atlantic coast city of Porto, with a population of just over 200,000.

Most of the city’s hotels have been shut since last spring due to Covid-19, and local gripes about streets being overcrowded with tourists now seem a distant memory.

With the pandemic exposing inequalities and bringing greater hardship in the bloc, the talks in Porto will initially look at how to ensure EU citizens are guaranteed their rights in such areas as employment support, gender equality and social services.

‘Covid has taken the covers off and shown the gaps’ in care, says Laura Rayner, a policy analyst at the European Policy Centre, a Brussels-based think tank.

‘So many people, through no fault of their own, have found themselves requiring some support.’ 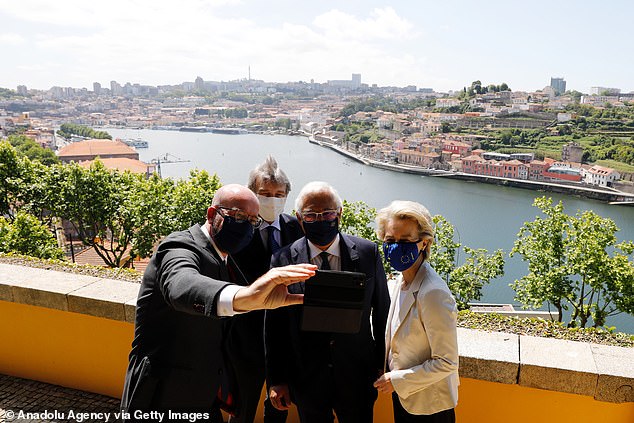 She added: ‘There’s certainly more awareness on the street’ of the need for a social safety net, and ‘it would be naive of politicians to ignore that’.

The EU is looking for endorsement in Porto of three headline targets: an EU employment rate of at least 78%, at least 60% of adults attending training courses every year, and reducing the number of those at risk of poverty or social exclusion by at least 15 million people, including five million children.

The push for social safeguards, largely led by centre-left EU governments, has caused some tension within the bloc.

Last month, 11 governments welcomed the Porto effort but warned central EU authorities against meddling in national policies – a clash of interests that has long dogged the bloc.

On Saturday, the leaders will hold an online summit with Mr Modi covering trade, climate change and help with India’s Covid-19 surge. Some EU countries have already sent medicine and equipment to India.

India and the EU spent six years trying to negotiate a free trade deal before giving up in 2013. Among the thorny issues were vehicle parts and digital privacy.

Plans for a face-to-face EU-India summit in Porto fell through after Mr Modi cancelled his trip due to the pandemic, but it is the first time an Indian leader will participate in a meeting with all the EU’s leaders.