When Victorians head to the polls next month, one of the issues they will have to figure out is whether government debt really matters.

It’s early days in the state campaign, but the Andrews government gives every indication it plans to continue borrowing and spending to fund its promises. Matthew Guy’s opposition, meanwhile, is pledging to introduce a debt cap and end “Daniel Andrews’ era of spiralling debt and higher taxes”. It’s one of the few clear fault lines to emerge between the parties so far. 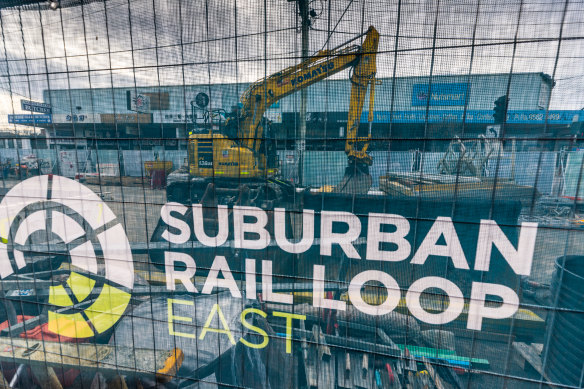 The state opposition says it will introduce a cap on the state’s debt levels, and has pledged to scrap the $35 billion first stage of Labor’s suburban rail loop.Credit:Jason South

Every home owner with a mortgage will know that the cost of debt is increasing. Guy, scrambling for traction, is trying to tap into a fear of a budget out of control in an era of rapidly rising interest rates, high inflation and the prospect of global recession.

The Coalition has historically sold itself as the more economically responsible of the major parties. Jeff Kennett swept to power in Victoria in 1992 on the back of the financial catastrophes of the Kirner government, memorably branding Labor “the guilty party” to justify slashing public spending and selling off assets.

For years, this narrative demonised debt in Victoria. As a result, the post-Kennett Labor governments of Steve Bracks and John Brumby promised publicly they would maintain a minimum $100 million budget surplus.

But not all government borrowings are bad. When borrowed money is used to fund productive infrastructure, it helps grow the pie, meaning the debt shrinks in real terms, just as a house mortgage becomes more manageable as your wage increases. It’s when too much is borrowed at once, or the money is spent profligately, that governments can get into trouble.

As our economics writer, Josh Gordon, has reported, Victoria’s debt is increasing significantly. By 2025-26 it is expected to reach $167.5 billion in net terms, up from $11.8 billion in 2010-11. It is a remarkable increase, if not yet alhttps://www.theage.com.au/national/victoria/where-would-you-cut-spending-or-increase-revenue-to-reduce-victoria-debt-20221005-p5bnbv.htmlarming. The Andrews government says spending to turbocharge the economy will eventually carry the budget back to surplus. And with much of this debt locked into historically low interest rates, the payments on that $167.5 billion are not yet onerous.

But if the economy fails to fire as hoped, or the global headwinds grow too strong, we may be stuck with that debt for a lot longer than we would like, paying it back at higher interest rates. As Tim Piper, the Victorian head of the Australian Industry Group, told The Age: “We’re leaving our children with it … the debt level underpins everything the government is able to do, and is relevant to every single one of us.”

The state opposition says it will introduce a cap on the state’s debt levels, and has pledged to scrap the $35 billion first stage of Labor’s suburban rail loop, redirecting the funds into the health system. While it made some embarrassing errors over the costings, the opposition has at least attempted to find offsetting savings for its spending promises.

Our public consultations for the Victoria’s Agenda project, in which we asked what people want politicians to be talking about, showed debt was a key issue for some. As Gordon wrote, the view of some economists and business leaders is that at some point Victoria will need to tackle it.

The government, which has yet to release detailed costings, needs to explain why its onslaught of mega-projects – including newly announced hospital upgrades, new train stations and more level crossing removals – are good value for money.

And while the Coalition is right to raise concerns, it will need to convince voters that its strategy, which includes a costly plan to cap public transport fares at $2 and a $1 billion extension to the Frankston line, will safeguard the economy any better. Debt, in other words, needs to be back on the political agenda.

Michael Bachelard sends an exclusive newsletter to subscribers each week. Sign up to receive his Note from the Editor.