A West Australian high school teacher has had his teaching registration revoked after multiple historical allegations of “persistent” grooming and serious misconduct dating back to the 1980s.

The teacher, whose name has been suppressed in court documents, was in a “significant position of trust” when he requested a massage from a student, emailed another calling her “my lovely”, and hugged students in a manner that “breached professional boundaries.” 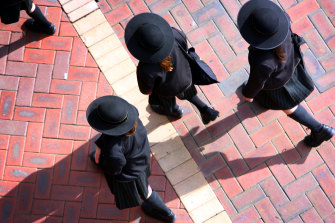 The teacher has admitted to “serious misconduct” and “grooming behaviours” relating to four girls over the span of about 11 years.

In August 2020, the Teacher Registration Board of WA received allegations from a school that the teacher, who was still in the profession at the time, acted inappropriately with two female students in 1989.

The serious misconduct complaint was then referred to their investigation and compliance branch, which identified concerns at a second school, in the mid-90s and 2000.

In the first instance in 1989, after the school speech night, the teacher hugged a former student goodbye.

In the same year, while supervising the students on a school camp, the teacher told a second girl he would buy her fast food for dinner if she gave him a massage.

The student then “straddled the teacher’s back, sitting on top of his bottom and massaged his back and shoulders for between five and 10 minutes”.

The following day the teacher bought the student the fast food he had promised.

In 1996, at a second school identified in the investigation, the teacher offered to give a third female student extra tutoring in his office.

Occasionally, when she left the sessions, he would hug her goodbye.

Then in 2000, the teacher began emailing a fourth student, also at the second school, about once a week for several months.

In one email he wrote: “Where do you go my lovely — when you’re alone in your head?”

In another he said: “We don’t have that long to talk when we are at school so perhaps we should arrange another time when we can talk longer.”

The student did not meet with him outside of school hours.

The teacher has now admitted his role in “grooming behaviour” and “serious misconduct” against the four students, and agreed he was unfit to be registered.

The documents also state the teacher “has reflected on the incidents that gave rise to the conduct and accepts that, nowadays, giving students hugs and a massage in the circumstances described are inappropriate acts,” and has “shown insight into his actions”.

The teacher has been disqualified from applying for registration for a period of five years.

“We are seeing more people reporting these kinds of cases now which is excellent,” she said.

“There is more awareness around these kinds of cases, and often people are hearing about others who have experienced similar things and recognising what they went through was also a form of abuse.

“That is why it can sometimes take so long for child abuse to be reported … reading similar stories can spur them into action … but they have to be ready to speak out.”

Hide said she did not believe simply suspending a teacher’s license for five years was enough, and anyone who was charged should “never be allowed to teach again”.