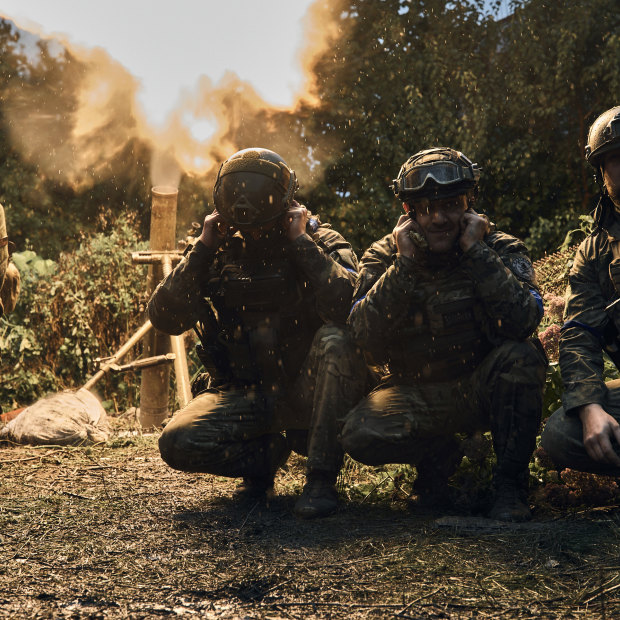 Ukrainian soldiers fire in the recently retaken Kupiansk in the Kharkiv region, Ukraine.Credit:AP

New York: On a dusty sidewalk in midtown Manhattan, hours after Vladimir Putin threatened to unleash a nuclear strike in his war against Ukraine, a young man with a thick hipster beard is holding up a handmade sign emblazoned with the words: Putin Is A War Criminal Killer.

A few meters away in the throng of New York’s gridlocked traffic, a mobile billboard truck crawls along Third Avenue, filled with images of 22-year-old Iranian woman Mahsa Amini, whose death after being arrested by Tehran’s notorious “morality police” sparked a wave of angry protests over the country’s repression.

And two blocks east, huddled next to one of the many police barricades surrounding the United Nations headquarters, a group of climate activists wave banners and chant in unison: “The earth, the earth, the earth is on fire; the Amazon is dying, politicians are all liars…”

As global leaders descended on the US this week for the 77th session of the UN General Assembly, the signs of the challenges they faced were impossible to ignore.

In any given year, this is the marquee event of international diplomacy: a spirited talkfest where presidents and prime ministers, community leaders and captains of industry gather along New York’s East River in an attempt to solve the problems of the world. 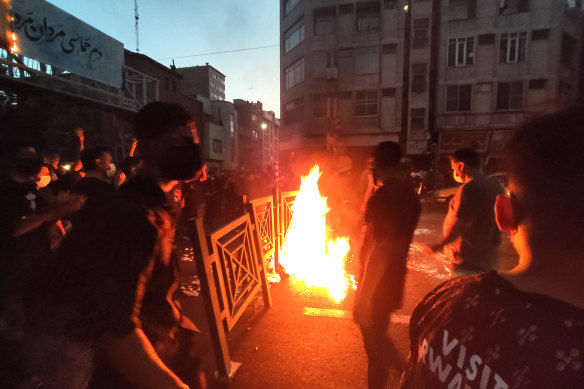 Protesters make a fire and block the street during a protest over the death of a woman who was detained by the morality police, in downtown Tehran, Iran.Credit:AP

But this year’s event – set in the shadows of the brutal war in Ukraine, China’s aggression over Taiwan, the existential threat of climate change, food insecurity and economic uncertainty – was also a potent reminder that the global dynamics have been upended.

The broader question now is whether the UN, a 193-member institution created after World War II to preserve peace, can tackle the multitude of crises confronting it and uphold the bedrock principles it was set up to defend.

As UN Secretary-General Antonio Guterres put it earlier this week, nations “have a duty to act and yet we are gridlocked in colossal global dysfunction.”

The scale of the challenge was not lost on Foreign Affairs Minister Penny Wong when she arrived at the UN to represent Australia in the absence of Prime Minister Anthony Albanese, who stayed in the country for Queen Elizabeth’s national day of mourning. 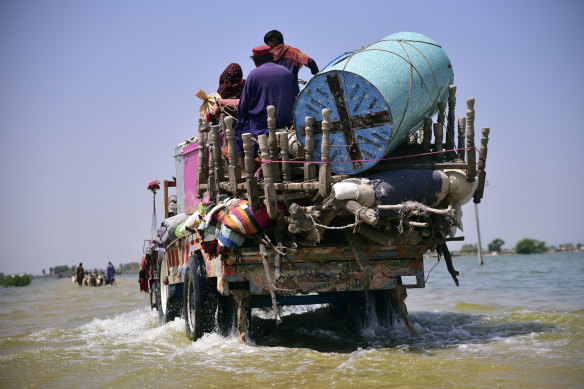 The UN General Assembly had just officially kicked off on Tuesday morning when Wong met with her Ukrainian counterpart Dmytro Kuleba on the sidelines of the green and gold circular General Assembly Hall sometime around 9.30am. Australia had already provided military and humanitarian aid to Ukraine, including bushmasters and drones, but Kuleba urged Wong for more support. His sense of urgency was palpable.

“No words of condemnation can stop the Russian army,” Kuleba later explained. “What can stop them is the Ukrainian army equipped with modern weapons coming from our partners – and this is the topic of virtually every conversation I’m having here in New York.”

It didn’t take long for the rest of the world to be reminded why.

In a national address on Wednesday morning in Moscow, Putin declared a partial military mobilisation to call up as many as 300,000 reservists, resulting in angry protests and a rush of would-be conscripts fleeing the country.

The Russian president also voiced his support for staged referendums being planned as a precursor to the annexation of occupied areas of Ukraine and signalled that he was prepared to use nuclear weapons to defend Russian territory. 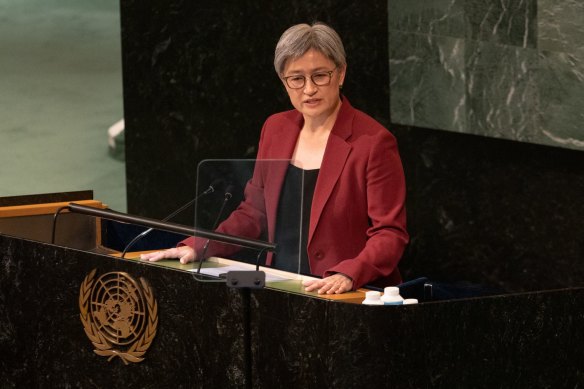 “In the face of a threat to the territorial integrity of our country, to protect Russia and our people, we will certainly use all the means at our disposal,” Putin warned. “This is not a bluff.”

“Wherever you are, wherever you live, whatever you believe, that should make your blood run cold.”

Outside the fortified walls of the UN there were also potent signs of rage. As videos emerged on social media showing Russian men called up by the government to fight Putin’s war, Fedor Poliakov, a Russian-born New Yorker, feared for the safety of his loved ones back home.

“My friends and family are now waiting to learn if they will be sent to the army when they don’t want to be,” he tells me.

“Today or tomorrow some military forces will come for them and take them for Ukraine. From our country, Sergey Lavrov (Russia’s foreign minister) is here, and people around the world must know that he and the Kremlin are criminals. Bloody criminals.”

Lavrov, however, was as defiant as ever. When the UN Security Council met on Thursday for a special meeting to discuss the need for Russian accountability, the diplomat arrived about 90 minutes late and used his allocated speaking time defending Moscow’s actions and accusing Ukraine and its allies of attempting to “impose on us a completely different narrative about Russian aggression”.

He then walked out almost immediately, refusing to listen to other nations as they stepped up their condemnation of Moscow’s actions.

The snub highlighted a longstanding problem with the UN’s structure and renewed calls to reform the 15-member Security Council. While the group has met about 20 times this year to discuss Ukraine, it has been unable to take any meaningful action because Russia is one of the “P5” permanent veto-wielding members, along with the US, France, Britain and China.

Indeed, one of the most notable examples of the council’s impotence took place on February 24, when Putin appeared on national TV at 6am in the shadow of darkness in Moscow, announcing he would be launching an invasion of Ukraine – at the same time that council members had convened a special meeting urging the Russian strongman not to attack. 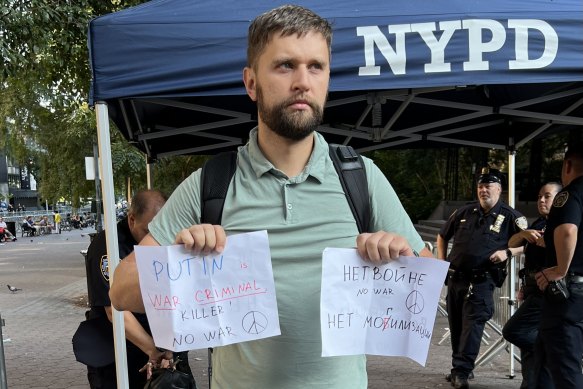 Stewart Patrick, a senior fellow and director of the Global Order and Institutions Program at the Carnegie Endowment for International Peace, says despite calls for reform, it is unlikely the veto provision would be removed, as none of the permanent members favours doing so. However, an open question, he says, is “if you could create a norm where the veto is used only in exceptional circumstances” – something that Biden himself suggested this week.

But Patrick also notes that while the UN has its flaws, it still remains the world’s premier multilateral body and a bedrock for world order by virtue of its universal membership and binding charter.

“This has been the most challenging year for the UN, but there are still so many functional things that the UN does that are indispensable,” he says, citing its “incredible” humanitarian relief work as an example. “It’s not as if everything has fallen apart.”

While the war in Europe set the tone for this year’s gathering, it was by no means the only issue at the fore.

In his opening address, UN Secretary General Antonio Guterres urged developed countries to tax windfall profits from fossil fuel companies and divert the money to countries harmed by the climate crisis and people struggling with rising food and energy prices.

On the sidelines of the General Assembly, Grace Forrest, the co-founder of human rights organisation, Walk Free, discussed the findings of a damning report that found that the number of people enslaved in the world, such as those in enforced marriages and forced labour, had now reached 50 million – and increase of 10 million in the past five years.

And almost two months after US House Speaker Nancy Pelosi’s controversial visit to Taiwan, China’s ambitions were also ever present, amid growing fears that a conflict like Ukraine could be repeated in the Indo-Pacific.

Tensions reignited last Sunday after Biden declared in a US 60 Minutes interview that he would commit military forces in the event of an “unprecedented attack” by China. By Wednesday, the US president sought to clarify his remarks, telling global leaders: “We do not seek conflict. We do not seek a Cold War.”

But his earlier comments were nonetheless contentious, not only because they appeared to overturn decades of strategic ambiguity towards the defence of Taiwan – but because such a move would draw Australia into an unwanted future conflict.

In a sign of Australia’s desire to reset its relationship with Beijing after it plunged to new lows under the former government, Wong met her Chinese counterpart Wang Yi on Thursday night at the Chinese Mission in New York – their second encounter in three months.

During the meeting, Wong called for restraint on Taiwan, urged Beijing to remove trade barriers, and asked China to exert its influence with Russia to stop the war.

“We cannot accept a situation where large countries determine the fate of smaller countries,” Wong said in her inaugural speech to the General Assembly on Friday. “That is why Russia’s illegal, immoral invasion of Ukraine cannot be normalised – and it cannot be minimised.”

It was a message UN members had been making all week. But eight months into a war with no end in sight, the question is: to what end? As UN chief Guterres warned this week: “our world is in peril – and paralysed.”