Yerevan, Armenia: Armenia and Azerbaijan are accusing each other of breaking a US-brokered truce agreement within minutes of it coming into force, the third time international mediation has failed to halt the worst fighting in decades over the territory of Nagorno-Karabakh.

Each side said it was observing the humanitarian cease-fire that took effect at 8am local time on Monday, while accusing the other of violations. Azerbaijan said Armenian forces fired with artillery at its military positions and residential areas, while Armenia reported artillery attacks by Azerbaijani troops. 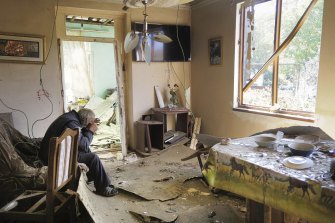 Yury Melkonyan, 64, sits in his house damaged by shelling from Azerbaijan’s artillery during a military conflict in the separatist region of Nagorno-Karabakh.Credit:AP

There are no international monitors on the ground to verify whether the truce is being observed, while each side has taken to social media to allege breaches. Azerbaijan's Defence Ministry posted a tweet two minutes after the accord came into force alleging Armenian forces "grossly violated" the cease-fire, before deleting it shortly after.

The US State Department announced in a joint statement with Armenia and Azerbaijan late Sunday that the two countries had agreed to abide by the terms of a cease-fire first negotiated in Moscow on October 10. That initial agreement and a subsequent attempt to call a truce collapsed within hours, and the latest announcement came shortly after Azerbaijani President Ilham Aliyev said he wouldn't accept an unconditional cease-fire.

Aliyev, who's received strong support from Turkey, said Armenia must agree to a withdrawal of its armed forces from Azerbaijan's internationally recognised territory for hostilities to end.

"We cannot wait for another 28 years," he said.

Russian President Vladimir Putin said last week that about 5000 people had already been killed since the clashes began on September 27, with heavy losses on both sides.

US Secretary of State Michael Pompeo held separate talks with the Armenian and Azerbaijani foreign ministers in Washington on Friday, two days after the representatives of the warring sides met with Russian Foreign Minister Sergei Lavrov in Moscow.

The US, Russia and France have tried without success for nearly three decades to mediate a peace deal between Armenia and Azerbaijan over Nagorno-Karabakh. Armenians took control of the region and seven surrounding districts of Azerbaijan in a war that killed 30,000 and displaced 1 million people amid the collapse of the Soviet Union before Russia brokered a 1994 truce.

US President Donald Trump said at a campaign rally in New Hampshire earlier Sunday that "we're going to get something done" on the conflict, calling it "an easy one." He said on Friday that he aimed to help Armenia in the dispute, never mentioning Azerbaijan in remarks to reporters.