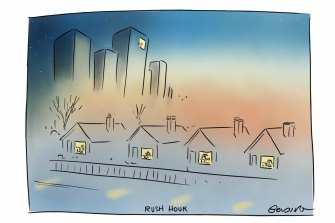 To submit a letter to The Age, email [email protected] Please include your home address and telephone number.

Melbourne Catholic Archbishop Peter Comensoli has stated that double-dose vaccination requirements will lead to a two-class society (“Church warns of ‘two-class society’ over vaccine rules”, The Age, 25/9). Is he serious?

As just one of several religious leaders who have asked for special exemptions from COVID restrictions for their followers, the hypocrisy is breathtaking. Apparently two classes are fine as long as religious groups are the beneficiaries rather than the whole community.

In our democratic society people are free to practise their religion, but they also are subject to the laws of the land.

… a ‘two-class’ society
Archbishop Peter Comensoli objects to the state government creating two classes of citizens by giving rights to the vaccinated and refusing them to the unvaccinated. But when it comes to entry into the Church’s priesthood he favours “a two-class society”, giving rights to one group (men) but not another (women). It’s a lot easier to change your vaccination status than your sex or gender.
Peter Davis, Magill, SA

Subtlety isn’t required
Long-time Liberal powerbroker Michael Kroger says that, despite having the charisma, the late John Elliott lacked the “subtlety and nuance” that would have been required to be a great leader (“John Elliott for PM? He’d have ‘blown up the country’”, The Age, 25/9).

Judging by the way Prime Minister Scott Morrison has handled the termination of the submarine contract with the French, it appears that subtlety and nuance are no longer requirements for a Liberal leadership position. Nor, apparently, is charisma.
Peter Martina, Warrnambool

The economic lens
In supporting net-zero emissions by 2050, Treasurer Josh Frydenberg appears to have belatedly recognised the overwhelming economic risk of delaying action on climate change (“Frydenberg backs net zero by 2050”, The Age, 24/9).

There are other urgent matters that might also benefit from being seen as purely economic risks.

A random selection for consideration before the next election would include overall energy policy, submarine contracts, refugee policy, quarantine facilities, aged care, JobKeeper overpayments and all taxation rorts. The clear message is the longer such matters are left in the government’s too-hard basket, the easier it is to portray them as merely economic risks.

It’s amazing how merely treating these as economic risks could change our perception of priorities and lead to more constructive action, in the absence of other imperatives such as ethical principles.
Jenifer Nicholls, Armadale

Eyes on the election
Treasurer Josh Frydenberg’s backing of net-zero emissions by 2050 is not about the government actually doing anything towards achieving zero net emissions, it’s about a forthcoming election and the need to give the appearance of maybe, perhaps, possibly doing something. Preferably.
Erica Grebler, Caulfield North

Resilience in short supply
It is good to see Parnell Palme McGuinness (“Don’t panic over pandemic mental health”, The Sunday Age, 19/9) thinks we should emphasise resilience in a pandemic.

For years teachers have been expected to include “resilience” in the curriculum and are no doubt spending many hours making sure their students are OK. They are adept at picking up on subtle changes in students’ performance and moods and proactively use the resources of their school to assist, as they have always done.

However, resilience is not a currency easily obtained when your circumstances are dire and the support just isn’t there for “those who need it”, a proviso McGuinness skates over as an afterthought.

Her analogy “as fear spreads we charge mindlessly in a single direction, trampling considerations, like spooked cattle” was a perfect description of the demonstrators we witnessed on the streets last Saturday. It is the anti-lockdowners who lack resilience, who are panicking, spooked by the evidence that they can’t control everything. They put the whole community (and hospitals) at risk.
Fiona Colin, Malvern East

I’m not confident
Climate change is real and many of your correspondents bemoan the Coalition’s lack of ambition to reduce emissions.

Their history of backflips, spin and downgrading any meaningful programs does not instil me with confidence that future plans will not suffer the same flip-flop fate. Taxpayer-funded futuristic technology being promised may help, but emission reductions are needed now.

Major companies and Australians are demonstrating their intentions by financing and implementing emission reductions despite the Coalition’s spin.

I don’t accept the Coalition’s plan for a plan to plan. The world may have already reached a tipping point, adopting net zero by 2050 is too late, 2030 must be our ambition.
Roger Digby, Kingsbury

Why is Labor so muted?
How appalling that this government so intent on establishing itself as a world power is so lacking in integrity as to attempt to defeat by devious means a poor family whose only aim is to return to their exemplary life in a town that wants them back (“Tamil family get 12-month visas but no Biloela return”, The Age, 24/9).

Why is the Labor opposition so muted on this matter?
Doris LeRoy, Altona

The Age’s editor, Gay Alcorn, writes an exclusive newsletter for subscribers on the week’s most important stories and issues. Sign up here to receive it every Friday.