The list of global stars jetting into Australia for work and simply to escape dire COVID conditions in the northern hemisphere is lengthy.

Now CBD has heard about another arrival: Kylie Minogue.

Witnesses saw Minogue arriving in Melbourne more than 10 days ago and transfer to hotel quarantine, meaning she is due to emerge about now.

Minogue had a very successful 2020, releasing to much acclaim the No.1 album, Disco, which she partly recorded at her home studio in London during lockdown.

While promoting the album last year, she spoke of her relief when Melbourne emerged successfully from its long lockdown and revealed that she couldn’t wait to fly home as soon as possible. 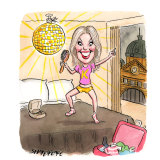 “I have never felt further from home or from my family,” she told the ABC.

A & P Artist Management, based in London, did not respond to CBD’s inquiries.

Neville said some “elite people” were undergoing hotel quarantine in Victoria and hadn’t complained. “They’ve gone on and done what they needed to and knew that that’s what was expected of them when they came back to Australia,” Neville said.

Whomever could the minister be referring to?

One of Neville’s media officers sounded distinctly nonplussed when CBD inquired about Minogue before declining to comment about the specific identity of the “elite people” the minister was referring to.

It seems Minogue is back to catch some of the Australian summer and to be reunited with her parents, Ron and Carol. Her low-profile return is in contrast to her younger sister, Dannii Minogue, who arrived back in Australia amid some controversy when she flew into Queensland from the US last July. Minogue and her 10-year-old son, Ethan, were granted an exemption from hotel quarantine on medical grounds and quarantined at a private property on the Gold Coast.

In contrast with some mouthy tennis players, we haven’t heard a peep of complaint from Minogue about her quarantine experience. That’s why we love Kylie!

Congratulations are in order for a pair of loved-up billionaires who are tying the knot this weekend. CBD hears that Melanie Perkins and Cliff Obrecht, the couple who co-founded the globally successful digital design software company Canva, are finally staging their long-delayed wedding in Perth.

The couple started the business in Perkins’ mum’s lounge room with a bank loan and a tax rebate of $5000. They now have an estimated combined wealth of $2.5 billion, making Perkins the third richest woman in Australia, while Canva has a value of $8.7 billion.

But 2020 was not without its challenges. In a single day last year, Perkins and Obrecht realised they had to shut down the office and cancel their wedding.

Obrecht had proposed during a trip to Turkey in July 2019. A Canva spokesman said the company didn’t have any information that it was able to share with CBD about the pending nuptials.

The couple are said to be planning a second wedding in Sydney later this year. Given both billionaires are on the record expressing a disdain for materialism, we are sure the wedding will be a modest affair, especially since Obrecht proposed with an engagement ring worth $30.

Kevin Andrews, 65, the longest-serving federal MP, is fighting for his political life at a Liberal Party preselection this Sunday, up against former special forces captain turned barrister Keith Wolahan, 43.

Wolahan would represent generational change, but despite the former army officer’s tour of Afghanistan, he might find Andrews harder to unseat than the Taliban.

The prize is the Liberal seat of Menzies in Melbourne’s eastern suburbs and while some think the father of the House should gracefully move on, a cavalcade of conservative luminaries have lent support: Scott Morrison, Josh Frydenberg, Michael Sukkar, Jim Molan, Peter Dutton, Dan Tehan, Alan Tudge and Angus Taylor. Also flying the flag for Team Andrews? Sky News talking heads Andrew Bolt and Peta Credlin, who has been a fixture by Andrews’ side on the preselection campaign trail.

But it is fair to say that some of the quotations contained in the glossy brochure Andrews sent to Menzies delegates are not exactly what you would call fresh.

Liberal Party sacred site John Howard praises Andrews’ deep thinking about policy and strong views on economic freedom and social institutions. “Kevin Andrews has never been reluctant to both articulate and consistently stand by the values which have guided his life both politically and otherwise,” the former prime minister writes.

A disclaimer is forced to note the comments actually come from Howard’s foreword in One people one destiny: a work in progress, the 2017 collection of Andrews’ speeches. Could it be that after Andrews’ marathon 30-year stint in Parliament there’s nothing new to say?