Remember, remember… to wear your wellies! Wet and windy weather set to sweep across the country ahead of Bonfire Night this evening – as forecasters issue yellow weather rain warning for south east England tomorrow

Bonfire night events could be dampened down tonight as forecasters predict that blustery showers sweeping across the country today will run into the evening.

A weather warning has been issued by the Met Office for heavy rain affecting parts of the south east coming into force tomorrow, with flooding ‘likely’.

It comes as fireworks and bonfire events are setting up across the country for a weekend of celebrations on the anniversary of Guy Fawkes’ failed lot to blow up the Houses of Parliament.

Forecaster Dan Stroud described the weather today as ‘grim’, particularly in the south and east, but predicted things picking up through the day in other parts of the UK. 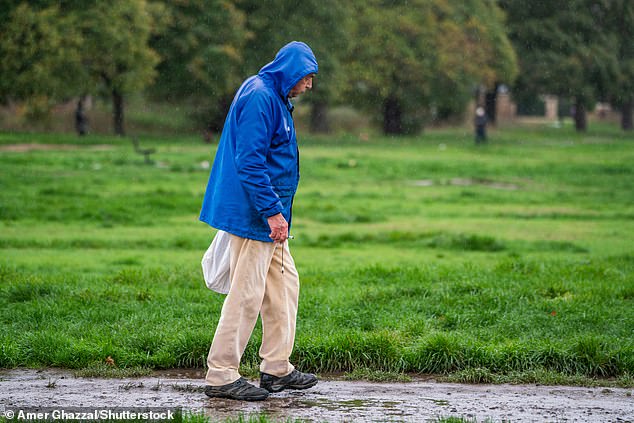 Remember, remember… to wear your wellies: Celebrations for Guy Fawkes night could be dampened across parts of the UK as rain is expected 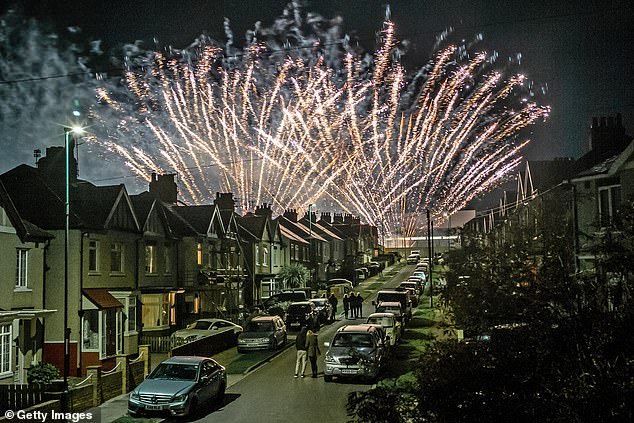 A firework display at Saltburn cricket ground yesterday. Some savvy Brits opted to move their Bonfire night celebrations to a clearer day after seeing the forecast 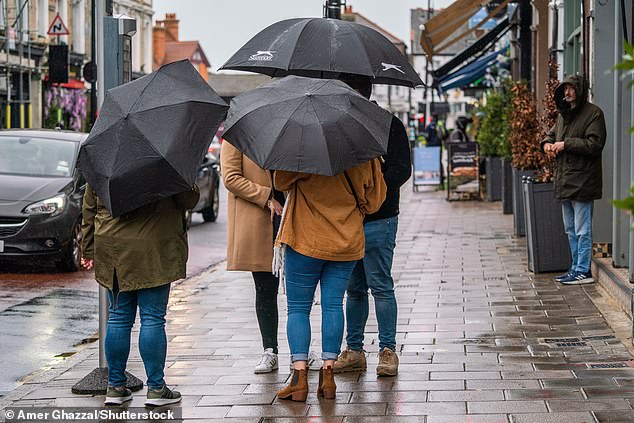 Don’t forget your brolly: A weather warning has been issued by the Met Office for heavy rain and strong winds affecting parts of the south east coming into force tomorrow

‘Conditions are slowly improving from the north and west’, he said, predicting largely dry conditions across Northern Ireland, Scotland and Wales by the evening.

But, he said, it is a ‘different story across south and east’ which are set to experience ‘patchy rain and drizzly outbreaks’ into the evening as rain bands move over the regions.

Tomorrow looks even more miserable for these parts of the country, with a yellow weather warning coming into force over parts of Sussex and Kent.

He said the rain will ‘pep up and regalvanise across south and east tomorrow morning, with heavy outbreaks developing across those areas’. 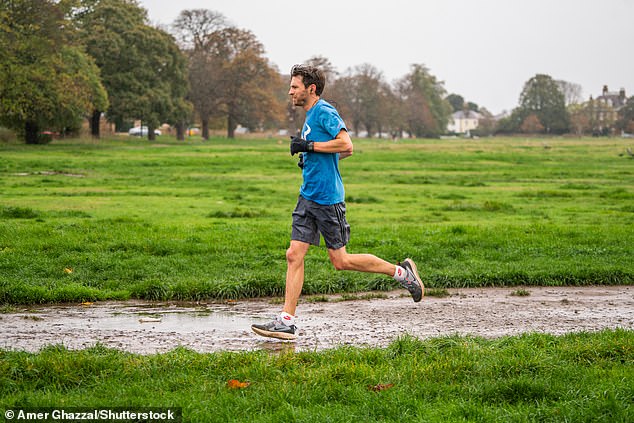 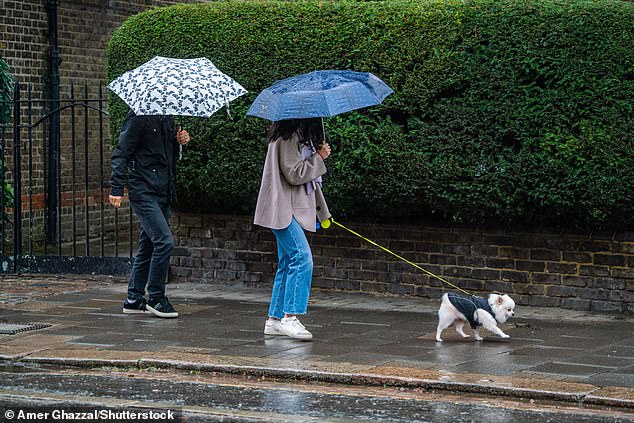 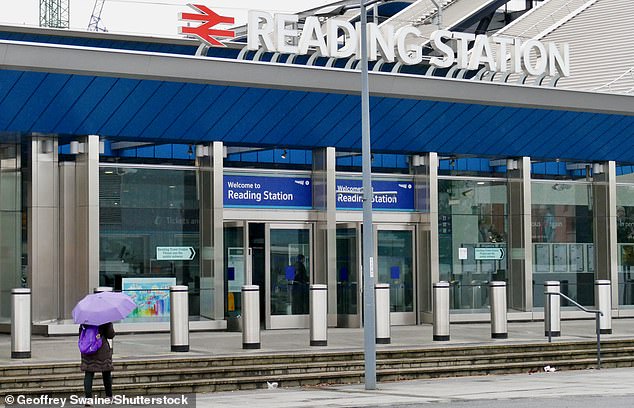 He predicted heavy rain of two or more inches and a ‘generally unsettled’ outlook.

‘Further bands of showers are expected to move through early next week,’ he said.

‘What is of concern on Monday night into Tuesday is the broad band of severe coastal gales, running across England and Wales,’ he said, largely coming in over night.

He advised the public to make sure garden furniture is well-secured as winds hit and to allow themselves extra time for commutes.

The Environment Agency also has 11 flood warnings in place across the UK today.

Rain across western areas of England look set to move east throughout the day, according to the forecaster. 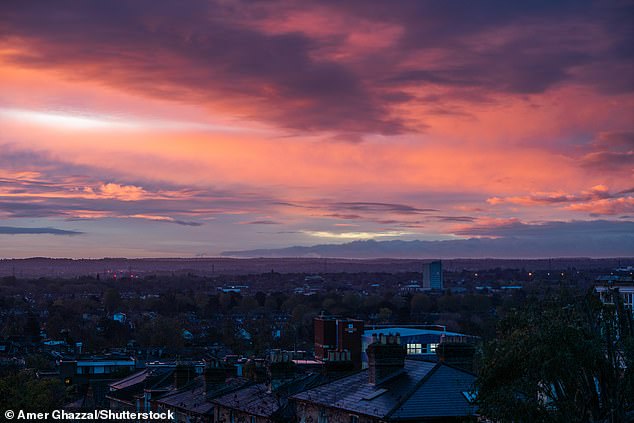 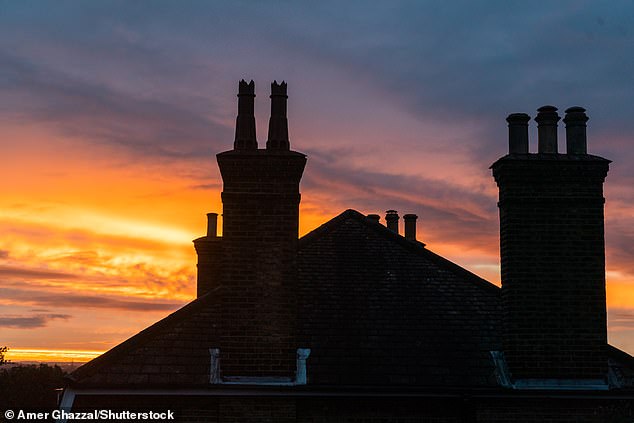 The Met Office has issued a weather warning telling people to expect further rain, some of which will be heavy, for southern and eastern England tonight and tomorrow.

The yellow weather warning means that ‘flooding of a few homes and businesses is likely’, according to the Met Office.

They also warned that bus and train services will probably be affected, with journey times taking longer.

Car journeys are also expected to take longer due to spray and flooding on roads.

The Met Office also flagged that they expect mist and fog patches to form over night in Yorkshire and Lincolnshire. 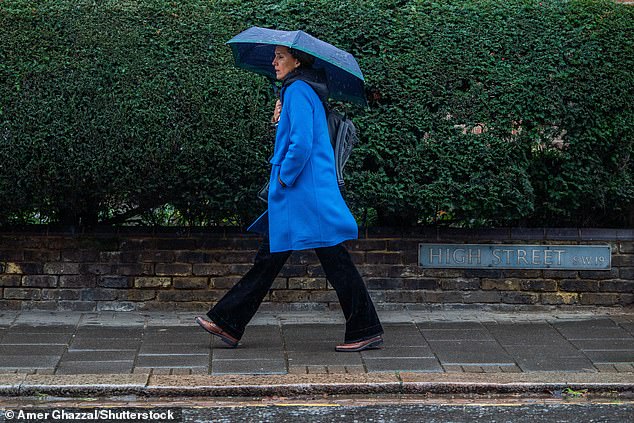 The Met Office has issued a weather warning telling people to expect further rain, some of which will be heavy, for southern and eastern England tonight and tomorrow 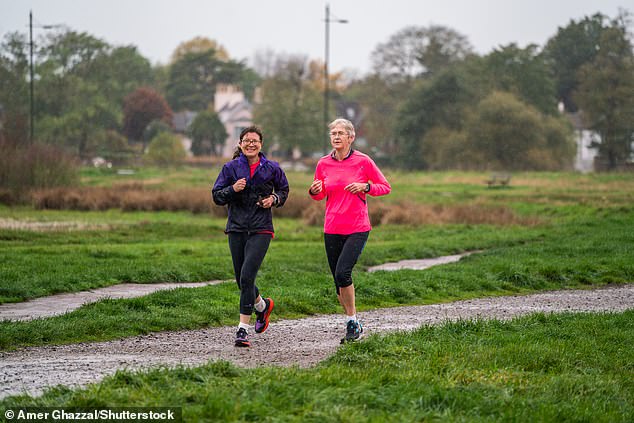 While Scotland is looking increasingly dry today, temperatures are looking set to plummet with the coldest conditions expected there this week.

Guy Fawkes Night celebrations could be disrupted in the south and east of England, with many opting to set off fireworks and light fires on a clearer night.

Some savvy Brits opted to move their bonfire night celebrations to a clearer day after seeing the forecast for November 5.

Today, walkers hoping to enjoy their Saturday mornings outdoors had to wrap up and brace with their brollies as the rain poured in Wimbledon, south London this morning.

Runners were pictured braving the damp conditions as they got out and about in their waterproofs on Wimbledon Common. 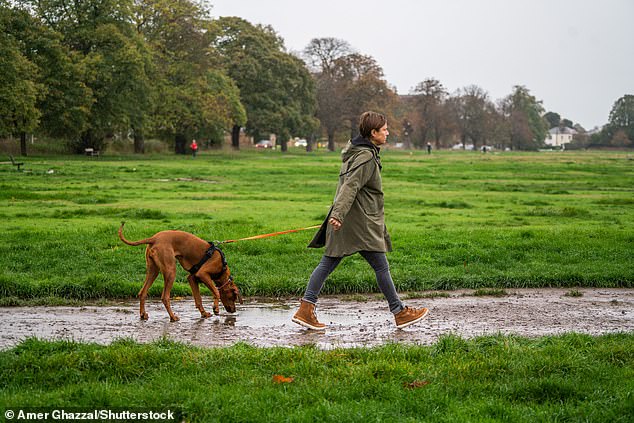 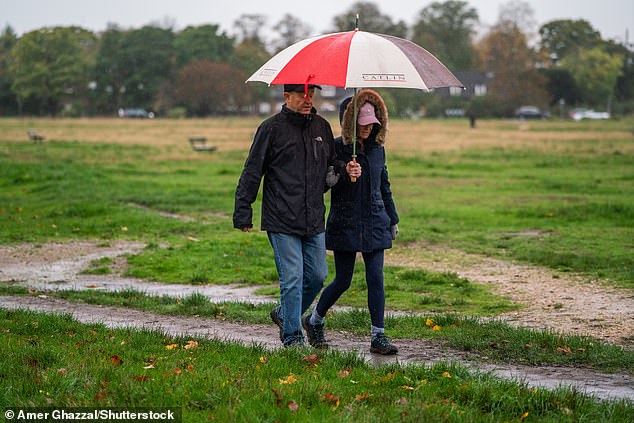 Commuters at Reading station also needed umbrellas as the heavens opened in the Berkshire town.

The Met Office also warned of rain today in Teesside, describing today’s weather in the region as Breezy with the rain, but later the wind eases. Maximum temperature 12 °C.’

While the day there is starting off as ‘cloudy, with outbreaks of rain soon arriving, these probably heavy at times, ‘the weather will become dry later this afternoon, with perhaps some sunshine breaking through by sunset, most likely across Northumberland.

The four-day forecast for the UK looks as follows:

Sunday: Highs of 15°C with lows 2°C in Scotland. The Met Office predicts rain, some heavy, in southern and eastern England, clear spells and patchy dense fog across central areas. In the west it expects breezy conditions with heavy showers and frost in the northeast.

Monday: Highs 16°C and lows of 2°C in Scotland. Rain in the south east is expected to clearearly on before another band moves in.

Wednesday: Highs of 16°C and lows of 1°C in Scotland. Largely unsettled but Wednesday looks set to be the driest day, although winds look to pick up.

A surgeon at Britain’s biggest eye hospital has said he is worried about a potential surge in people suffering serious eye injuries over Guy Fawkes weekend due to the cost-of-living crisis.

Badrul Hussain, a consultant of more than 10 years at Moorfields Eye Hospital in north London, said he expects more people to attempt DIY firework displays this year as local councils cancel organised events due to funding.

During an interview with the PA news agency, Mr Hussain said Bonfire Night injuries tend to range from scratches on the eye caused by sparkler debris to eyeballs being split open in scenes ‘much like a horror film’.

He added that most firework-related injuries affect the hands and face, including eyes, due to people handling and looking closely at fireworks which have failed to go off in the dark and experiencing thermal blasts.

Mr Hussain said: ‘If you think about what happens to an egg white when you put heat on it, it goes white and cloudy rather than clear.

‘The clear window at the front of an eye, if that’s subjected to heat or significant chemical injury, instead of being clear it can become cloudy and potentially cause permanent visual damage. 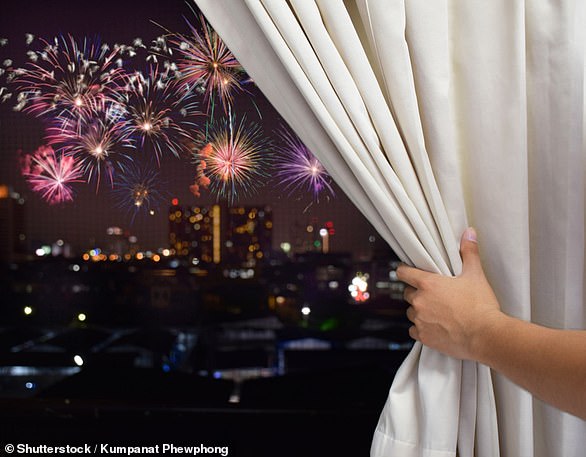 Guy Fawkes Night celebrations could be disrupted in the south and east of England, with many opting to set off fireworks and light fires on a clearer night

‘The other end of the spectrum are things that are much like from a horror film, where the blast from a firework has effectively split the eye open.’

Mr Hussain said fireworks and sparklers can also lead to surface scratches on the eyeball caused by falling embers.

The surgeon said Moorfields Eye A&E department experiences a swell of admissions during autumnal celebrations including the five-day festival of Diwali, Guy Fawkes weekend and the Chinese Moon Festival.

‘It’s always three or four weeks in autumn rather than one particular night when the number of injuries with fireworks seems to go up,’ he said.

Mr Hussain said that over this period, Moorfields usually treats hundreds of people with ‘significant injuries’ to their eyes caused by fireworks, and he expects the numbers to be greater this year due to the cost of living crisis.

‘One of the concerns I have this year is because of costs of things, a lot of local authorities may be cancelling their organised firework displays, and more people might be organising their own displays at home,’ he said.

Many councils across the nation have cancelled their displays this year due to budget constraints, including dozens in London.

Mr Hussain said the safest way to enjoy Bonfire Night is by going to an organised event, but for people planning their own displays, his biggest piece of advice was not to return to a lit firework if it fails to go off.

He also recommended only purchasing fireworks with the CE safety mark, keeping them in a closed box, and reading the Firework Code before using them.

Mr Hussain said: ‘I know there may be fewer around this year, but I recommend going to a proper firework display where there is proper health and safety and people are kept at a certain distance from fireworks and any falling embers.

‘Fireworks are not toys, and they can have life-changing injuries for people.’