Washington: Like two US presidents before him, Donald Trump could temporarily hand over power to his vice-president should he become incapacitated, for example while undergoing a medical procedure as treatment for the coronavirus.

Trump said on Friday (Saturday AEST) that he had tested positive for COVID-19 and was going into quarantine to begin the recovery process immediately. 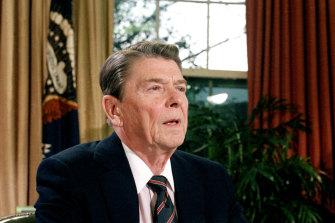 US President Ronald Reagan was mindful of the 25th Amendment’s provisions when he had to go into surgery. Credit:AP

Under Section 3 of the US Constitution's 25th Amendment, adopted in 1967 following the 1963 assassination of President John Kennedy, Trump could declare in writing his inability to discharge his duties.

Vice-President Mike Pence would become acting president, although Trump would remain in office. The president would regain his powers by declaring in writing that he is again ready to discharge them.

The 25th Amendment's Section 4 also offers a path to stripping a president of power if, for instance, his Cabinet believes he has become incapacitated, but this has never been invoked.

On July 13, 1985, President Ronald Reagan elected to have a precancerous lesion removed after it was discovered during a colonoscopy. He signed a letter that, while not specifically invoking Section 3, said he was mindful of its provisions. Vice-president George H.W. Bush was acting president for nearly eight hours, from 11.28am until 7.22pm, when Reagan issued a letter declaring himself able to resume his duties. 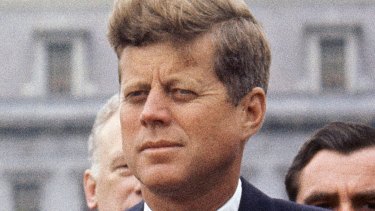 The 25th Amendment was passed after the assassination of president John F. Kennedy.Credit:AP

On June 29, 2002, President George W. Bush invoked Section 3, temporarily transferring his powers to vice-president Dick Cheney before undergoing a colonoscopy. Cheney was acting president from 7.09 am to 9.24am.

Under Section 4, the vice-president and a majority of either Cabinet officials or “such other body as Congress may by law provide” can inform leaders in the two houses of Congress that the president “is unable to discharge the powers and duties of his office”.

In such a case, the vice-president takes over as acting president. The president resumes office after informing the same two congressional leaders “that no inability exists” unless the Cabinet officials or other body declare otherwise. Congress then must assemble within 48 hours to decide the issue.

If two-thirds of the members of the House of Representatives and of the Senate vote in their respective chambers that the president is unable to discharge the duties of office, the vice-president remains acting president until after the next scheduled presidential election decides the next White House occupant.