It is staggering how much has changed for Los Angeles over the past six years. When I moved there in 2012, the city’s reputation was still overwhelmingly based on lazy clichés: that its supposed cultural vapidity carried over into its restaurants; that its Hollywood artifice bled into the lives and onto the plates of its millions of non-movie-star residents.

Very few people — apart from those residents — understood the culinary riches Los Angeles had to offer. Ignorance on the part of outside observers was mainly to blame, but the city’s food scene was still in the process of blooming.

Today? Ask almost anyone who eats widely in the United States, and they’ll say that Los Angeles is the most exciting food city in America. I agreed with that sentiment when I left in 2017, and I agree now, having just returned for a visit. (The New York Times recently appointed Tejal Rao its first California restaurant critic.)

As I ate my way through Los Angeles last month, I started thinking about Sydney, and all the things that other sunny city might learn from Los Angeles’s recent meteoric rise in culinary status. Why Sydney? There are lessons that Los Angeles could teach any other city, in Australia and beyond, but in Sydney I see a similar trajectory and search for identity. Both cities are often chided about their sun-drenched, health-obsessed culture, and Sydney is still in the process of blooming.

To be fair, there is plenty that Sydney could teach. But those lessons are boring and oft-repeated — does Los Angeles really need to be told for the millionth time that it has a sprawl problem, or a traffic problem, or a lack of good public transit? Not by me, certainly, and not today, as that city struggles with tragic violence.

Sydney’s natural beauty and charm — and its promotion of those assets — are unparalleled. Sitting at the bar at the Sydney restaurant Ester a few weeks back, I ran into an American who now lives in Melbourne. “If Americans knew how good we have it here in Australia, they’d storm the borders,” he said.

There are painfully evident things that Los Angeles has and Sydney doesn’t, which I’ll leave out of this particular argument — amazing tacos, world-class-yet-affordable sushi — but that’s beside the point. The important lessons Los Angeles has to offer are mainly philosophical.

Much of that philosophy, and many of Los Angeles’s greatest strengths, were pointed out and encouraged by the longtime restaurant critic Jonathan Gold of LA Weekly and, later, The Los Angeles Times. And one of the most profound lessons he taught the city was: Your most important restaurants don’t have to be your fanciest.

Mr. Gold, who died in July, consistently sought out and advocated restaurants that other critics might have overlooked. The quality of the food and its cultural relevance were what attracted him; he didn’t care if he was served in a luxurious room or on a dusty street corner, and he was impervious to hype.

In his yearly lists of the best and most essential restaurants in Los Angeles, he didn’t elevate European cooking over other types of food. Taco trucks and dumpling houses gained the same status in the eyes of his fans — practically every dedicated eater in the city — as any fine dining establishment.

In Sydney there is certainly a class of diners, food writers among them, who enjoy exploring all the nooks and crannies of their city and in celebrating the hole-in-the-wall noodle joints. But it’s rare to see those places alongside fine-dining and modern Australian restaurants on the city’s best-of lists.

Usually they’re banished to “cheap eats” sections, as if their low prices are the main thing that gives them value. I wish Sydney, and Australia, judged its restaurants purely on the power of deliciousness and less on glittery dining rooms and high-rent real estate. Both have value, but style is not inherently better than substance.

One of my first stops when I arrived in Los Angeles was Guerrilla Tacos, the new restaurant owned by Wes Avila. Mr. Avila has long been considered one of the city’s most innovative and important chefs, despite the fact that — until now — he hasn’t had a brick-and-mortar restaurant.

He’s been operating out of a truck for years, serving tostadas made with sea urchin and hamachi and drifts of fresh herbs, and tacos full of butter-brushed sweet potatoes topped with almond chile salsa. Mr. Avila’s food — in his cookbook, on the street or from a table at his breezy new restaurant — is the perfect example of what makes eating in Los Angeles so thrilling.

And in one corner of his restaurant is a painting of Mr. Gold’s silhouette. 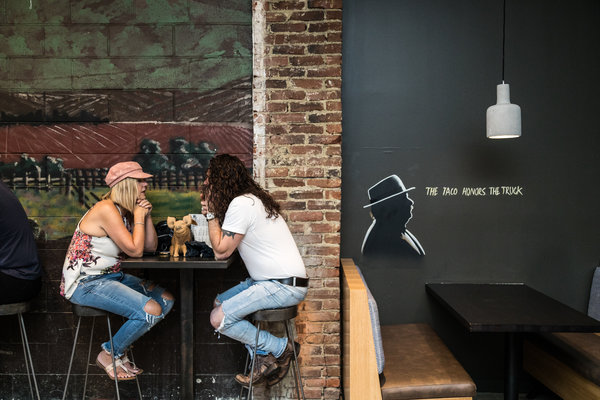 Los Angeles’s list of must-visit places is full of specific regional cuisines and mash-ups, the edible spoils of a city packed with generations of immigrants. During this visit I made sure to get to Baroo, the Korean-Californian-Nordic experiment of a restaurant that closed on Oct. 27 after a few years of blowing minds in a strip mall in Hollywood.

I went to the new location of Night & Market, in Venice, to drink natural French wine and eat the chef Kris Yenbamroong’s peerless Thai food. It was there that I remembered what it’s like to eat in a truly diverse room, staffed and patronized by people of all ages and races and identities.

In Australia, I tend to find myself either in a room full of white people, or in one where I am the only white person — a situation that often signifies a kind of badge of honor for another type of diner, a sign that they have found that coveted and elusive quality: authenticity.

In Los Angeles, people don’t care too much about authenticity. One of the best dishes I had at Night & Market was a pad kee mao made with pastrami from Langer’s, the old-school Jewish deli. Mr. Yenbamroong’s food, like Mr. Avila’s, is loved because it is authentic to their experience, as the children of immigrants, as Angelinos, as chefs, as humans.

There are inklings of this in Sydney, at places like Boon Cafe and Lankan Filling Station: an understanding on the part of some chefs and diners that the city’s diversity is its greatest asset, and that the food that results from the meeting of worlds is often the most exciting.

Eat What You Want

“L.A. didn’t come into itself until we stopped caring what anyone thought about us,” my friend Lesley Suter said as we sat under the cascading philodendrons that hang from the ceiling of Bavel, a new Middle Eastern restaurant in Los Angeles’s arts district.

Ms. Suter was the longtime food editor for Los Angeles Magazine, and now works as a travel editor for Eater. She pointed out, as we ate devastatingly wonderful hummus with duck ‘nduja, that during all the years Los Angeles compared itself with San Francisco and New York, it never really knew what it wanted to be.

“When we were finally like, ‘Screw it, this is what we want to eat, this is who we are, we don’t really care what anyone else thinks,’ that’s when everything got so good,” she said.

Sydney desperately wants to be recognized as a global food destination. But after eating there roughly every month for the past year, I’m still unsure of the soul of the place. There are lots of great restaurants, but very few that have a clear sense of place other than the majestic harbor and beach views that define some landmark restaurants.

Outsiders may refer to Sydney with generalizations about juice cleanses, açai bowls and botox, but Los Angeles is proof that those skewed perceptions can be thwarted by an engaged dining public. If the city stopped caring what anyone else thought, if the goal was simply to have fun and eat whatever pleases the people who live in Sydney, what would that look like?

I’d love to find out.

Do you have a suggestion for Besha Rodell? The New York Times’s Australia bureau would love to hear from you: [email protected], or join the discussion in the NYT Australia Facebook group. Read about the Australia Fare column here. 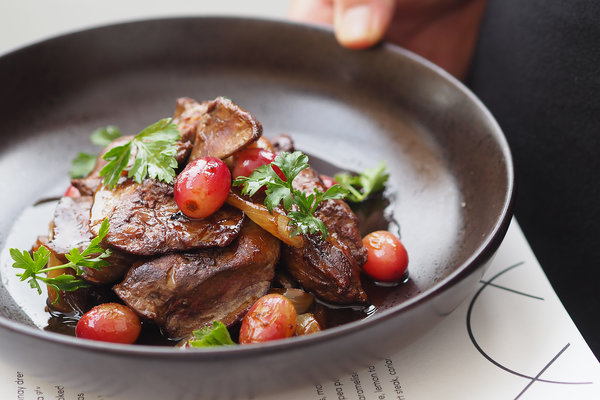 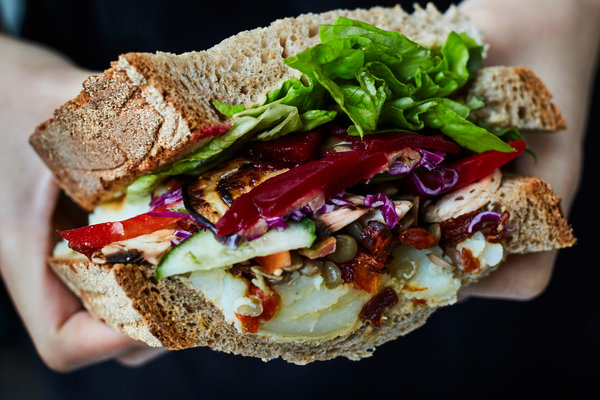