Washington: The county clerk immediately knew something strange was going on. A mail ballot had arrived from Suzanne Morphew, a woman missing since May – more than five months earlier.

“There’s posters all over our town,” said Lori Mitchell, the clerk and recorder in Chaffee County, a Colorado community of about 20,000 rocked by Morphew’s disappearance last Mother’s Day. “Constant things in the news about her. There’s people at the grocery store passing out fliers.”

The ballot didn’t have Morphew’s signature as required, Mitchell said. But someone had signed on the “witness” line: The woman’s husband, Barry Morphew.

“I was stunned,” Mitchell recalled. “I couldn’t believe it. I was like, what in the world is going on?”

For a long time, she said, it was just something fishy that her office reported to law enforcement. Then Barry Morphew was charged this month with murdering his wife. This week, things got stranger still: Barry was also accused of casting his wife’s ballot in a fraudulent vote for President Donald Trump.

Barry echoed Trump’s false claims of election fraud as the motivation for his own alleged wrongdoing, according to an affidavit filed on Thursday in court. The 53-year-old told FBI agents last month that he did it because “all these other guys are cheating” and said his wife would have backed Trump anyway.

“I just thought, give him another vote,” Barry allegedly said.

It was the latest wild twist in a widely followed missing-person case – publicised in part by Barry’s emotional pleas for his wife’s return – as well as in a presidential race dogged by false claims Trump lost the election due to fraud. 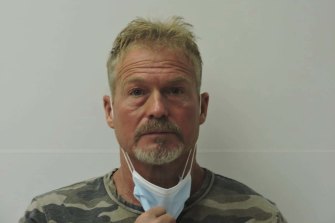 Barry Morphew, who was arrested in connection with the disappearance of his wife, Suzanne Morphew.Credit:AP

Barr is charged with a felony count of forgery and a misdemeanour count of offences related to mail ballots, court records show, on top of other charges stemming from his wife’s disappearance.

He is being held without bail and due to appear in court later this month, according to online court records, which do not show a plea. He defended himself to local media as suspicions swirled over the past year.

“I love my wife. I would never hurt my wife,” he told news station KDVR last fall. “She is the light of my and my daughters’ lives. This whole thing is killing us and that is why I want our privacy.”

His attorney did not immediately respond to a request for comment. The Office of the Colorado State Public Defender’s website states that lawyers do not comment on the criminal cases of those they represent.

Barry told authorities he cast his wife’s vote “just because I wanted Trump to win,” according to the affidavit. He allegedly said he “didn’t know you couldn’t do that for your spouse”.

Melinda Moorman, Suzanne’s sister, said in an interview that she was outraged and perplexed to hear about the allegation from the sheriff.

“To hear that Barry involved himself in voter fraud is beyond comprehension to me,” she said, adding that the family is still reeling from the earlier murder charge. 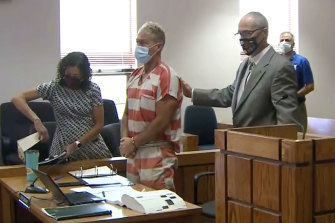 In this still image from video, Barry Morphew, center, appears in court in Salida, Colorado earlier this month in connection with the disappearance of his wife, Suzanne.Credit:AP

Moorman said she believed Morphew’s behaviour was that of an “insane person.”

“It’s a very difficult thing to wrap our minds around, to believe he could have gotten to this level of evil,” she added. “As a family, we did not want to believe he was capable of this, however, everything points to this happening.”

Barry was arrested on May 5, only a few days shy of the first anniversary of Suzanne’s disappearance, on charges of first-degree murder, tampering with physical evidence and attempt to influence a public servant.

The search for his wife began on May 10, 2020, when a neighbour reported that 49-year-old Suzanne Morphew did not return from a bike ride.

Barry Morphew told the police he was on a work trip that day, away from their home in Maysville, Colo., about a 2½ hour’s drive south-west of Denver. As authorities scoured the hills of Maysville, Morphew pleaded on camera for his wife’s safe return.

A sprawling investigation ensued. More than 70 investigators from local, state and federal law enforcement agencies would eventually execute more than 135 search warrants across the state and interview hundreds of people, according to the Chaffee County Sheriff’s Office.

One news station, KXRM, interviewed an associate who raised questions about Barry’s alibi from the weekend Suzanne went missing. Jeffrey Puckett – a contractor hired to help with Barry’s business trip – said that Barry’s hotel room smelled of chlorine and that his bed did not appear slept-in, according to KXRM.

Yet the case stretched on without answers until this early month, when Barry was arrested near his home in Poncha Springs, Colo., according to the sheriff’s office and the district attorney for the 11th Judicial District in Colorado. During a news conference, Chaffee County Sheriff John Spezze said “thousands of hours” of work had gone into the search for the woman described as a devoted, loving mother of two.

Then came the charges of illegal voting.

Morphew’s case is not the only allegation of fraudulent Trump votes to emerge amid Republicans’ baseless insistence that electoral wrongdoing boosted President Joe Biden. Last month, a Pennsylvania man pleaded guilty to voter fraud charges after he cast a ballot for Trump under his dead mother’s name, after registering with her driver’s license.

Bruce Bartman apologised for his actions and blamed them on pandemic isolation and listening to “too much propaganda,” according to the Philadelphia Inquirer. Two other men in Pennsylvania have been accused of committing voter fraud by casting illegal ballots for Trump, the Inquirer reported.

Trump and his supporters promoted myriad claims of fraud in the 2020 election, challenging the results in lawsuits rejected by at least 86 judges and fuelling the January 6 attack on the Capitol. Local, state and federal authorities have said there is no evidence of fraud that could have cost Trump the election.