Berlin: One headline asked, “Where is Olaf Scholz?” A popular magazine mocked the German chancellor’s “art of disappearance.” And his ambassador in Washington wrote home that Germany was increasingly seen as an unreliable ally in a leaked memo that was all the buzz this past week and began with the words: “Berlin, we have a problem.”

With the threat of war hanging over Europe and rising tensions in the standoff with Russia over Ukraine, Scholz is headed to Washington on Monday for his first meeting with President Joe Biden since taking over as chancellor in December. Foremost on his agenda: Show the world that Berlin is committed to the Western alliance — and, well, show his face. 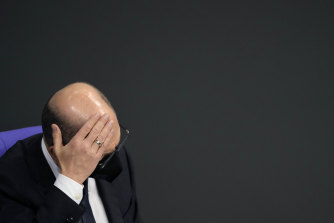 Less than two months after taking over from Angela Merkel, his towering and long-serving predecessor, Scholz is drawing sharp criticism at home and abroad for his lack of leadership in one of the most serious security crises in Europe since the end of the Cold War.

His Social Democrat-led government, an untested three-way coalition with the Greens and Free Democrats, has refused to send arms to Ukraine, most recently offering 5000 helmets instead. And it has been cagey about the type of sanctions that could be imposed in the event of a Russian invasion.

As for the chancellor, he has made himself conspicuously scarce in recent weeks — so scarce that newsmagazine Der Spiegel described him as “nearly invisible, inaudible.”

While President Emmanuel Macron of France and Prime Minister Mario Draghi of Italy have been busy calling President Vladimir Putin of Russia, Scholz has so far neither picked up the phone to Moscow nor visited. He has not gone to Kyiv, Ukraine, yet either, and his visit to Washington, some note, took almost two months to organise. 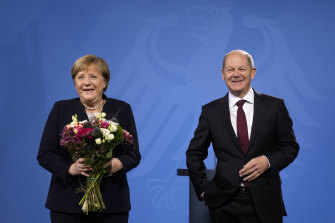 Last week, Emily Haber, Germany’s ambassador to the United States, sent a memo to Berlin, warning of “immense” damage to Germany’s reputation. It was not just the news media but many in the US Congress who questioned Germany’s reliability, she reported.

It has not helped that since then, Gerhard Schröder, a former German chancellor from Scholz’s Social Democrats, accused Ukraine of “saber rattling” and just Friday announced that he would join the board of Gazprom, Russia’s most prominent energy company.

“Scholz’s central mission for his Washington visit has to be restoring German credibility,” said Thorsten Benner, a founder and the director of the Global Public Policy Institute in Berlin.

“It’s not how Mr Scholz envisaged his first US trip as chancellor,” Benner added. “But international security was never near the top of his agenda.”

Scholz, 63, has been a familiar figure in German politics for more than two decades. He was general secretary of his party and mayor of the northern port city of Hamburg before serving in two governments led by Merkel’s conservatives, most recently as her finance minister.

An industrial relations lawyer and lifelong Social Democrat, Scholz narrowly won the election in the fall on a platform promising workers “respect” and a higher minimum wage, while nudging Germany on a path to a carbon-neutral future.

Foreign policy barely featured in his election campaign, but it has come to dominate the first weeks of the new administration. Rarely has a German leader come into office with so many burning crises. As soon as Scholz took over from Merkel in early December, he had to deal not just with a resurgent pandemic but with a Russian president mobilising troops on Ukraine’s borders. 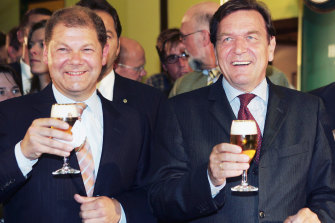 Then-German Chancellor Gerhard Schroeder, right, drinking a glass of beer with then-Social Democratic member of German parliament, and future Chancellor Olaf Scholz during their visit to the Holsten brewery in Hamburg in 2005.Credit:AP

“It wasn’t the plan,” said Thomas Kleine-Brockhoff, vice president of the Berlin office of the German Marshall Fund. “This is a government that has huddled around an ambitious plan of industrial transformation, but the reality of a crisis-ridden world has interfered with their plans.”

Of all of the crises, the standoff with Russia has proved particularly uncomfortable for Scholz. His Social Democrats have traditionally favoured a policy of working with Moscow. During the Cold War, Chancellor Willy Brandt engineered “Ostpolitik,” a policy of rapprochement with Russia.

The last Social Democratic chancellor, Schröder, is not just a close friend of Putin’s, he has also been on the payroll of various Russian energy companies since 2005, notably Nord Stream 1 and Nord Stream 2, the two gas pipelines connecting Russia directly with Germany under the Baltic Sea.

It was not until last week, after Schröder’s comments about Ukraine, that Scholz felt compelled to publicly distance himself from the former chancellor.

“There is only one chancellor, and that is me,” he told public broadcaster ZDF. 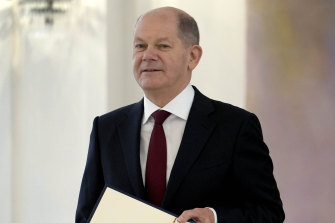 There is only one chancellor, and that’s me, says German Chancellor Olaf Scholz.Credit:AP

His party’s divisions over Russia are one way to explain why Scholz has shrunk away from taking a bolder lead in the standoff with Russia, prompting some to lament the loss of leadership of his conservative predecessor.

Scholz won the election last year primarily by convincing voters that he would be very much like Merkel. Terse, well-briefed and abstaining from any gesture of triumph, he not only learned to sound like the former chancellor, he even emulated her body language, holding his hands together in her signature diamond shape.

But now that he is running the country, that is no longer enough. German voters are hungry for Scholz to reveal himself and increasingly impatient to learn who he is and what he actually stands for.

As the current crisis unfolds, Scholz’s imitation of Merkel is also less and less convincing. She was understated and studious, and often kept her work behind the scenes, but she was not invisible.

In the spring of 2014, after Putin invaded Crimea, Merkel was on the phone to him almost every day. It was Berlin that united reluctant European neighbors behind costly sanctions and persuaded President Barack Obama, distracted by domestic affairs, to focus on a faraway conflict.

At that point, of course, Merkel had already been chancellor for nine years and knew all of the protagonists well.

Scholz’s advisers have been taken aback by the level of criticism, arguing that Scholz was merely doing what Merkel had so often done: Make yourself scarce and keep people guessing while engaging in quiet diplomacy until you have a result.

When Scholz has spoken up on the current crisis — referring to the Russia-owned gas pipeline Nord Stream 2 as a “private-sector project” before pivoting to saying that “everything” was on the table — he has conspicuously recycled language that Merkel used before.

But given the escalation in the current crisis, that language is long outdated, analysts say.

“He’s overlearned the Merkel style,” Kleine-Brockhoff of the German Marshall Fund said. “He’s Merkel-plus, and that doesn’t work in a crisis.”

After facing mounting criticism from Kyiv and other Eastern European capitals, Scholz’s leadership is increasingly being questioned at home, too.

In a recent Infratest Dimap poll, Scholz’s personal approval rating plummeted by 17 percentage points, to 43 per cent from 60 per cent in early January, the sharpest decline for a chancellor in postwar history, the firm says. Support for his Social Democrats fell to 22 per cent, lagging the conservatives for the first time since last year’s surprise election victory.

Scholz’s team announced that after returning from Washington, the chancellor will pivot to a full schedule that he hopes will shift German diplomacy into high gear. Following his meeting with Biden, he will meet with Macron; the Polish prime minister, Andrzej Duda; and the three leaders of the Baltic states. The week after, he will travel to Kyiv and Moscow, in that order.

Senior diplomats say it is high time for such a pivot, starting with Monday’s visit to the White House.

Scholz has a seeming center-left ally in Biden, who has so far refrained from publicly criticising Berlin. Not since President Bill Clinton’s second term have both the White House and the German chancellery been in the hands of centre-left leaders, and for all of the wavering on the German side, the two administrations have been in close contact throughout.

But patience is running thin, and Scholz will have to bring something to the table.

“There has to be a visible sign of commitment to the alliance,” Kleine-Brockhoff said. “That’s what other allies are doing: The Spanish, the Baltic countries, the Poles, the Brits — everyone has offered something to strengthen deterrence on the eastern flank.”

German lawmakers have started preliminary conversations about beefing up their troop presence in Lithuania, officials say. Other options include more naval patrols in the Baltic Sea and more air patrols in Bulgaria and Romania.

As important as any material commitment may be the words Scholz uses — or does not use — to publicly communicate that commitment.

“Maybe for the first time he could mention Nord Stream 2 by name when talking about possible sanctions,” Kleine-Brockhoff said.

“He needs to make a clear statement that Germany gets the situation and will stand with its allies in a language that appeals to people in the US and ideally not in his usual flat language,” he added.

This article originally appeared in The New York Times.