Although we have just launched into the new year, when we later review 2023 in the context of Australia’s security, there is a good chance it will be judged as the year of living dangerously.

Of course, in the post-Christmas and new year celebratory haze, the memory of Australia’s foreign minister being welcomed in Beijing will give many comfort, and even encourage the narrative that a corner has been turned in Australia’s bilateral relations with China, and the path ahead leads to reduced tariffs on our goods, the release of Australians detained in China, and greater harmony and even co-operation in the South China Sea. 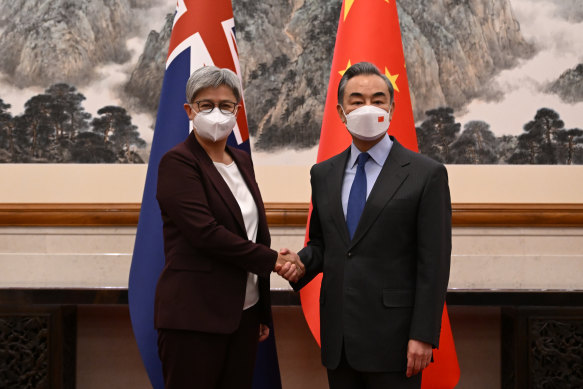 But this is a mirage.

Nothing has changed in the underlying strategic interests. China’s recent harassment of the US plane operating in the South China Sea underscores the perilous divide between the interests of China and the US, and by association with the US, Australia.

Accordingly, there is little evidence of impending change in China’s approach to tariffs, detainees, or the South China Sea, or indeed, Taiwan, Hong Kong and Uyghurs.

Nonetheless, Australia has shown that it can navigate significant differences with Beijing, even when the impact is commercially significant and economically painful. In Australia, China was labelled a “trade bully” over its imposition of crippling tariffs on wine and other goods. The message from Beijing was clear. Australia had displeased China, and as a “small” country compared to China, that was an unwise thing to do and Australia would have to bear the consequences.

For many countries, even the threat of such treatment actively inhibits their actions for fear of potentially offending China. New Zealand, often admired as a country with a decent moral compass, has shown an unusual commitment to compliance with Beijing’s guidance.

But Australia, perhaps in part because of the economically compensating rise in the price and exports of iron ore and other commodities to China, stood strong in the face of China’s economic coercion. It is important to note that Australia took this action not under the protection of the US, which itself benefited through increased exports to China in the face of Australia’s dwindling access. Rather, Australia stood on its own, determined to adjust to a new trade and bilateral reality. The US then made all the right supportive noises, but it was after the fact.

And so, Australia enters 2023 buoyed by its show of strength in trade and with recently improved atmospherics with Beijing. At the same time, Australia is increasingly intimately entwined with the US in its major power confrontation with China. Australia’s commitment to acquiring nuclear-powered submarines unequivocally demonstrates this. As Professor Clinton Fernandes noted in a recent opinion piece for this masthead, these submarines will be operated in the US’s interests, not necessarily Australia’s.

Once unthinkable, the addition of nuclear-powered submarines to Australia’s fleet is now accepted as a reality. Accordingly, the even more astonishing thought of Australia purchasing B-21 bombers is quickly becoming part of Australia’s security narrative. Developing a long-range strike capability to impose unacceptable costs on adversaries sounds great, until thought of in the context of Australia’s geography, neighbourhood and historical defence planning.

The most obvious point is that the more Australia integrates with the US military, the less independence Australia has in relation to participation in significant US military conflicts. This should trouble every politician, policymaker and sentient Australian.

China will also see that it is clearly the intended foe for the use of these capabilities. While this will act as a constant brake on Australia’s relations with China, it is not the worst of the consequences. China is pragmatic and has likely long assessed Australia’s commitment to participating in US military actions. Australia would just be saying it louder, but China has already got that message.

The real damage will be done to Australia’s standing in the region. It is arrogant and delusional to believe that the nations of South-East Asia like Australia’s introduction of new military capabilities to the region, or Australia’s chest-beating about confronting China.

At a time when Australia should be working with the countries of its region to promote peace, stability and collective protection, Australia has alienated them, and none more so than Indonesia. Indonesia is understandably uncomfortable with Australia’s decision to acquire nuclear-powered submarines. Apart from their enhanced capabilities, there are issues of concern related to nuclear proliferation and further embedding US military planning south of its archipelago. And Indonesia would assess, justifiably, that Australia’s B-21 bombers also pose a threat to Indonesia.

The one unalterable fact of Australia’s security environment is that the island chain to the north, once seen as a threat to Australia’s national security, is now Australia’s most important security asset. Working with Indonesia to protect its territory, and by extension, the approaches to Australia, is so obvious it is curious that it is the only security measure Australia seems determined to ignore.

Acquiring capabilities to facilitate military operations outside our immediate region, beyond the protective island chain that is Indonesia, is an ill-advised approach to promoting Australia’s security. It can only undermine Australia’s security, alienate Australia’s neighbours and heighten the risk of Australia’s automatic and likely unwanted involvement in a conflict far from Australia’s shores.

The Opinion newsletter is a weekly wrap of views that will challenge, champion and inform your own. Sign up here.

The Bruce Lehrmann trial: “From the start of this sorry affair, people who should have known better have inserted themselves into the fray, usually to the great detriment of both parties.” – Sydney barrister, Steve Boland

The greatest show: Doug Hendrie invested in Bitcoin but says of the crypto crash: “I’d be lying if I said I wasn’t enjoying it, just a tiny bit. OK, fine. A lot. Watching the cryptocurrency house of cards folding one by one.”

The RBA and Philip Lowe: “The man occupies one of the most powerful positions in the country. He signs the money! And the Australian people send him more than 10,000 $100 notes each year for the privilege. The last thing he is owed is your sympathy. Or my kid gloves.” – Economist Steven Hamilton