America is used to political disruption. It’s an enormous country that was born out of a revolutionary war and was indelibly scarred by a horrific civil war that tore its people apart. Interestingly, the biggest external threats to the United States over the past 50 years, Russia and China, have endured very similar histories – revolutionary war followed by a brutal civil conflict. However, the parallels end when it comes to managing civil unrest. 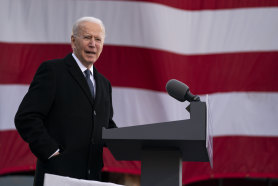 Authoritarian countries have weak state infrastructure. They rely on fear and the threat of overt state power to keep the peace. There is no freedom of speech or movement. Fair elections are a fiction and justice is the exception rather than the rule. While many around the world have been rattled by the events of the past few weeks, the American formula has delivered a solution. Joe Biden is exactly the right person at the right time to heal the nation.

Biden's calm but firm response to the attack on the Capitol is the leadership that most Americans want. At this moment, it is what America needs.

Over a career of almost 50 years in Washington, Biden has seen his share of global and domestic crises, first in the US Senate and then as vice-president. He possesses unrivalled experience compared with nearly every incoming president in the past 30 years.

Joe Biden won’t heckle, bully, belittle or humiliate. And the world won’t wake up every day with an adrenaline rush, frantically doom-scrolling through Twitter.

Biden knows how good government works. He knows that each member of Congress has their own constituency to worry about, a party to preserve and skin in the game. He’ll court and lean on members when he needs to get things done, but he’ll do it by deploying the legislative and political savvy he’s so well known for. He has a history of working across the aisle. The relationship between Republican Senate leader Mitch McConnell and Biden is deeper and more mutually respectful than anything offered by Donald Trump.

Similarly, Biden's cabinet appointments reflect the experience and stability needed to deal with an unprecedented twin set of economic and public health crises. Tony Blinken, a senior Obama official and the new Secretary of State, is measured and highly intelligent. Janet Yellen is exceptionally smart with a New York earthiness that is most useful for a Secretary of Treasury. And Lloyd Austin, the new Secretary of Defence, will be very much in the James Mattis mould as a senior and experienced military officer.

I have met most of the team and they all have a deep understanding of Australia’s role as a very close trusted ally. No diplomatic speed-dating is necessary for this administration. The rest of the nominees reflect Biden’s respect for experience, knowledge, humility and focus.

Biden’s policies are neither conservative nor terribly radical. Sure, he’s a Democrat, but he’s also a realist. He will spend more money, including a $US1.9 trillion stimulus package, being dubbed the “American Rescue Plan”, which aims to tackle COVID-19 and begin the economic repair that’s needed in the wake of the virus that has changed all of our lives. It’s a carefully thought through plan and likely to hyperdrive America’s recovery by the middle of the year. As an aside, Trump was hardly a fiscal conservative. He delivered the biggest budget deficits in modern history, even before the pandemic hit.

Biden’s regulatory agenda could prove troubling. If he can resist the pressure of the progressive wing of his party seeking to heavily regulate enterprise, then the possible explosion in America’s growth will eventuate.

On the international front, Biden will be a traditionalist. He will rejoin the World Health Organisation, empower the World Trade Organisation and he will refocus on the value of allies. His support for Bretton Woods institutions such as the International Monetary Fund and World Bank will be much appreciated. America will become more predictable.

Above all else, Joe Biden will become the empathetic face and voice of a nation that needs a hug and a dash of truth. He will not dominate the news. He won’t heckle, bully, belittle and humiliate. And the world won’t wake up every day with an adrenaline rush, frantically doom-scrolling through Twitter.

But Biden and his team will be aware that most first-term presidents get a political backlash against them in the next congressional elections in just two years' time. Campaigning has already started. I expect Biden will take the opportunity to wrest the blue-collar midwest vote back from the Republicans. Outside of New York State and California, Trump won more votes than Biden. So he has much work to do to consolidate key wins in working-class states such as Pennsylvania, Michigan and Wisconsin. He has shown he can even turn states like Georgia.

But to win and hold the blue-collar vote he needs to govern for Baltimore rather than Boston. Trump had nothing in common with most of the 74 million people who voted for him, yet he increased his support by more than 10 million votes over the past four years. Biden can win them back.

Most Americans are ready to start a new chapter. With Biden’s character and experience, combined with Trump’s terrible ending, the threads are in place to repair the fabric of democracy and preserve the fabled American dream.

Joe Hockey, a former federal treasurer, was Australia's ambassador to the United States during the Trump presidency.