The greatest game in NFL history turned on a coin flip.

Fine, you can question whether Sunday night’s AFC divisional showdown between victorious Kansas City and heartbroken Buffalo was one of the greatest ever. Good luck finding another one with 25 points scored on four different successful all-or-nothing, score-or-go-home drives in the final two minutes.

But this is indisputable: the NFL’s overtime gives an enormous advantage to whichever team wins the coin flip. Three years ago, Chiefs fans watched in horror as Tom Brady marched the Patriots down the field to an overtime victory in the AFC championship without giving Patrick Mahomes a chance to touch the ball. Sunday night, the coin came up Kansas City’s way, and this time it was the Chiefs who snuffed out the opposition.

The karmic scales balanced for Kansas City … but don’t expect Buffalo to accept its fate without a fight.

The NFL often tweaks or changes its rules on overtime, so much so that even players themselves are occasionally surprised to learn that a game can end in a tie. But here’s the immutable truth: the team that wins the coin flip has the chance to shut down the entire game. Overtime rules in virtually every other sport, from baseball to golf, give both challengers an equal shot, leaving the outcome of the game in the hands of the players, not the fates. In the NFL, all you need to do is call heads or tails correctly for a huge advantage.

Even the players recognize the need for balance. Here’s recently retired Greg Olsen, eloquently breaking down the issue:

If you are still arguing, in a game like that, it’s not in best interest of EVERYONE that both Mahomes and Allen get the ball in OT I don’t know what to tell you.

In a game where neither team could stop the other at the end, a literal coin flip determined the ending.

“I'm definitely in favor of [both sides getting the ball in overtime],” another player said. “Being in that situation, really having no control, no rebuttal or no retaliation on playing against an amazing offense like that — it kind of sucked.” Josh Allen in 2022? No, Travis Kelce in 2019, after the Chiefs lost to the Patriots. He’s surely singing a different tune right about now after catching the game-winning touchdown, but fair is fair.

Allen, for his part, took a more resigned and diplomatic tone. "The rules are what they are and I can't complain," he said after the game. "If it was the other way around, we'd be celebrating."

True to its regulatory nature, the NFL has different rules for overtime for regular and postseason games. In the regular season, the overtime period lasts 10 minutes, and there’s only one. If the game is still tied after that time, that’s how it goes in the books. In the postseason, ties don’t fly, so the periods are 15 minutes long and there are as many of them as are necessary. (Or not.) 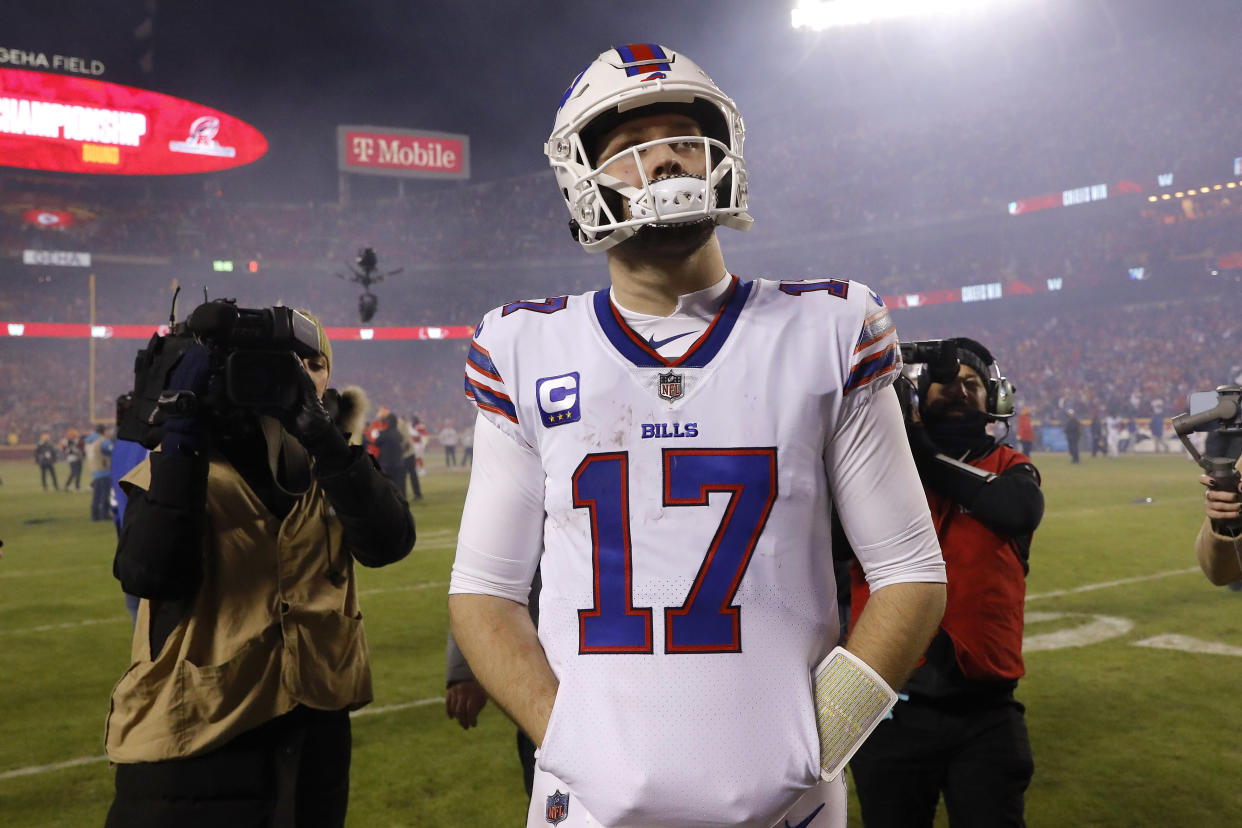 Either way, the rules lead off the same way: a touchdown by the team that controls the ball first ends the game.

Yes, there’s an easy argument in favor of the current rules: If the defense can’t stop the offense, the team doesn’t deserve to win. And that would be the case … if this was a fair fight between the offense and the defense.

The NFL’s entire rulebook already tilts sharply in the direction of the offense, from protecting the quarterback to enforcing targeting to pass interference spot fouls, meaning every defense is always fighting uphill. Raise the stakes to all-or-nothing in overtime, and the defense is standing on the edge of a cliff, its back to the open air, fighting both the offense and the rulebook.

The simpler solution: give each team at least one chance with the football, like in college. It’s elegant, it’s balanced, it’s fair. (College has its own overtime ridiculousness with its two-point conversion contest after two possessions in overtime; the NFL can leave that silliness behind.)

Granted, it could be worse. The NFL’s sudden-death overtime rules prior to 2012 ended the game on any score, which meant a long field goal would end the game. A team with a halfway decent kickoff return could be in game-winning range in just 25 or 30 yards. The NFL wisely ended that provision; it’s time to end the shutdown touchdown, too.

A game like Sunday night’s should have – probably would have – gone on forever, as unsafe as that would have been for the players. But if it had to come to an end, it should have been with both teams emptying their arsenals. Ending brilliance like Chiefs-Bills with an NFL overtime is like ending a Mozart symphony with a loud fart.

The NFL’s competition committee will hear requests to change the rules later this spring. Expect the Bills to fight as hard for a change to the overtime rules as they did in the waning minutes of Sunday night’s game. Pushing through a change will be difficult; it didn't work for Kansas City in 2019, just like the rules didn't change after Arizona defeated Green Bay in 2016 without Aaron Rodgers touching the ball in overtime. But the Bills ought to come away from Sunday night's classic with something more than just pain.