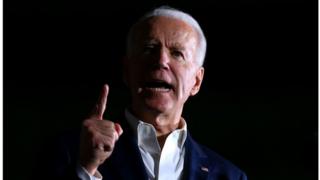 Joe Biden has emerged as the front-runner in the Democratic nomination race to take on President Donald Trump in November’s White House election.

But his last viable opponent, Bernie Sanders, is keen to highlight the former US vice-president’s political baggage from a long career as a Washington insider – and tar him as out of touch with the mainstream of the modern Democratic party.

Here, we break down the challenges Mr Biden still faces in the contest to become the Democratic nominee. Some of Mr Sanders’ attack lines are already being picked up the Mr Trump campaign.

Going after Mr Biden’s mixed record of support for the US government’s social welfare programme for retirees has been a theme for the Vermont senator in recent days as he seeks to boost his campaign.

Reform of such so-called “entitlement” programmes has long been a political bugaboo for candidates as well as elected officials, and Mr Biden’s decades-long career has laid bare this point. A senator before his stint as vice-president, Mr Biden argued that Social Security should be subject to government austerity. “When I argued that we should freeze federal spending, I meant Social Security as well,” he said in 1995. “I meant every single solitary thing in the government. And I not only tried it once, I tried it twice, I tried it a third time, and I tried it a fourth time.”

When challenged on this record on the campaign trail, Mr Biden has flat-out denied backing Social Security cuts. His campaign has said that, if elected, a President Biden would expand the programme, paying for it through a tax on the wealthy.

Despite his past comments, opinion polling of Florida voters in March indicated that 59% of them trusted Mr Biden to handle Social Security over Mr Sanders (37%).

“Joe Biden in the past has voted for what is called the Hyde Amendment, that said that women could not use Medicaid dollars in order to protect their reproductive rights and get an abortion,” Sanders told supporters at a rally.

An exit poll analysis by the political forecast website FiveThirtyEight found that white women were the single largest voting group in the Super Tuesday primaries that turned around Mr Biden’s campaign fortunes.

Given the importance of female voters, it is hardly surprising that Mr Biden’s votes on reproductive health would be scrutinised. Mr Sanders has honed in on the former vice-president’s positions on abortion, which have transformed over the past few decades. As a senator in 1981, he voted to support an amendment that would have allowed states to overturn the landmark Supreme Court ruling guaranteeing the US right to abortion. As recently as last year, he said he still supported the Hyde Amendment (which forbids public money from being used for abortions), but reversed course after it became clear he was the only Democrat in the field who did so.

Abortion access is an important issue for Democratic women, but Mr Sanders’ denunciation of Mr Biden’s record appears to go only so far. A YouGov/Economist poll finds that support from women overall for the former vice-president is slightly higher than for the Vermont senator. Young women under 30 back Mr Sanders. Those older than 45 back Mr Biden – and it is this group that votes more reliably. 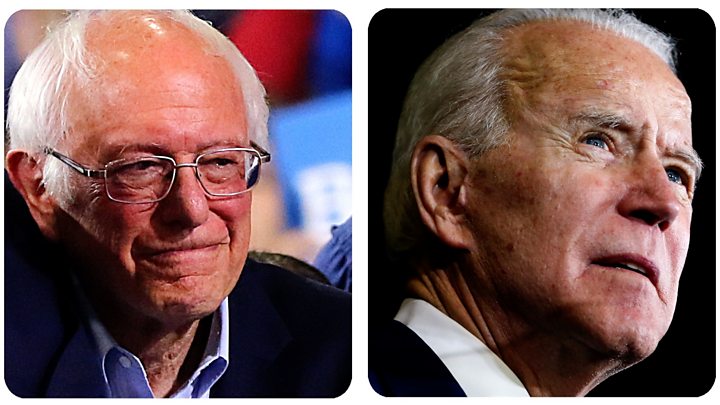 “Does anybody think that Joe can go to Michigan or Wisconsin or Indiana or Minnesota and say vote for me, I voted for those terrible trade agreements?” Mr Sanders asked supporters in March. “I don’t think so.”

The anti-free trade line worked for Mr Sanders in 2016, when the same criticism of Hillary Clinton helped the senator, a protectionist and a populist, eke out a surprise win in Michigan over his rival.

Mr Biden has said he stands by his vote for the North American Free Trade Agreement (Nafta), which critics say hollowed out manufacturing in the US. However, Mr Biden has argued that he is a “fair trader” who believes that “we should treat other countries in a way they treat us”, rather than a “free trader”.

The argument against Mr Biden looks to be less effective for Mr Sanders this time around than four years ago. According to a recent Gallup poll, 67% of self-described Democrats now say that Nafta has been beneficial for the US.

The debate will play out in the general election, however. “Believe me, Trump will and has already talked about Joe’s record on trade,” Mr Sanders told CNN. “Just looking at the facts – if you’re going into the heartland of America… it’s hard to make the case, when Trump has made trade such an important part of his agenda.”

Mr Sanders’ sharpest lines against Mr Biden have been against the former vice-president’s ties to moneyed interests. Mr Biden “bailed out the crooks on Wall Street who nearly destroyed our economy 12 years ago”, Mr Sanders said on Monday night, on a day when US stocks experienced their steepest freefall since the 2008 financial crisis.

On the debate stage, the senator has hit out at Mr Biden for taking money from well-heeled backers, in contrast to the Vermont senator’s campaign fundraising mainly through small-dollar donations.

Mr Biden has positioned himself as a champion of the masses, arguing that it is not him, but Mr Trump who is in the pockets of Wall Street.

At one point, he said he would eschew taking money from political action committees – private groups that can donate big money to campaigns with little oversight – but was forced to reverse course when his White House hopes were looking anaemic before Super Tuesday. A campaign spokeswoman defended the decision, saying: “Those who are dedicated to defeating Donald Trump are organising in every way permitted by current law”.

A recent Gallup poll found just 23% of Americans are satisfied with campaign finance laws, but many Democrats may see big money as a necessary evil to taking on a well-funded Trump campaign.

“Joe is going to have to explain to the American people – who are so tired of endless wars which have cost us too many lives, destabilised too many regions around the world, have cost us trillions of dollars – why he was a leader in getting us involved in the war in Iraq,” Mr Sanders said last week.

The Vermont senator has often pointed out that as a congressman he voted against the US invasion of Iraq. On this point, Mr Biden has conceded. “It was a mistake, and I acknowledge that,” he has said.

Given the primary season results so far, it would appear that despite voters’ mixed feelings over the war (half of Americans think it was a mistake, according to Gallup), this particular error of judgement is not costing Mr Biden much – so many people made the same wrong judgment and, politically speaking, it was so long ago.

Could it be weaponised by Mr Trump in the general election? Given the president’s losing battle to reduce the American military footprint in the region, it could be a risky one for him – but that has never stopped Mr Trump from throwing a punch.