Woman is sexually abused while thrown around by crowd tearing her clothes off in Pakistan: Police investigate HUNDREDS of men after attack on woman making TikTok video in a park

A young woman has been mugged and sexually assaulted by a crowd of hundreds of men in a park in Lahore, Pakistan.

The horrific incident took place on August 14, Pakistan’s independence day, but was not reported until several days later.

Harrowing footage taken by onlookers sees a horde of men pulling and pushing the woman, who was filming videos for social media platform TikTok at the Minar-e-Pakistan monument in the Greater Iqbal Park with six companions.

The men separated her from her friends and robbed her of her jewelry, money and mobile phone before they tossed her in the air, pulled off her clothes and groped her.

The Inspector General has confirmed that a total of 66 suspects have been identified and taken in by police for questioning so far, while two police officers were suspended due to alleged negligence in connection with the case. 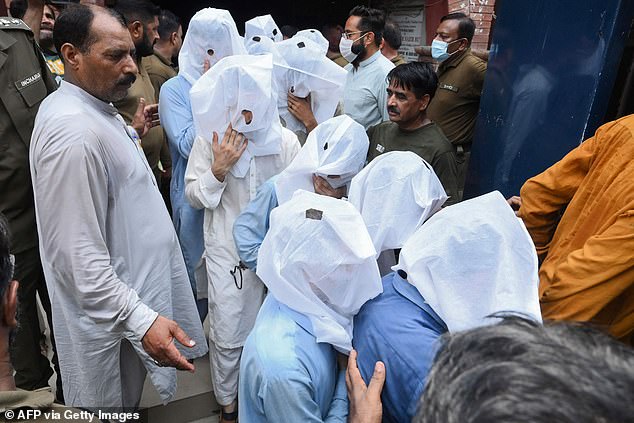 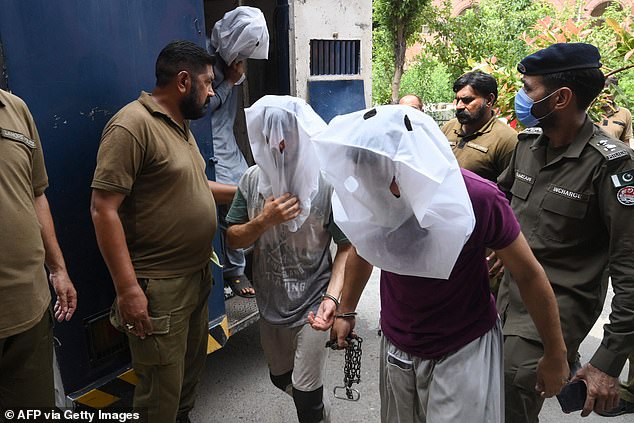 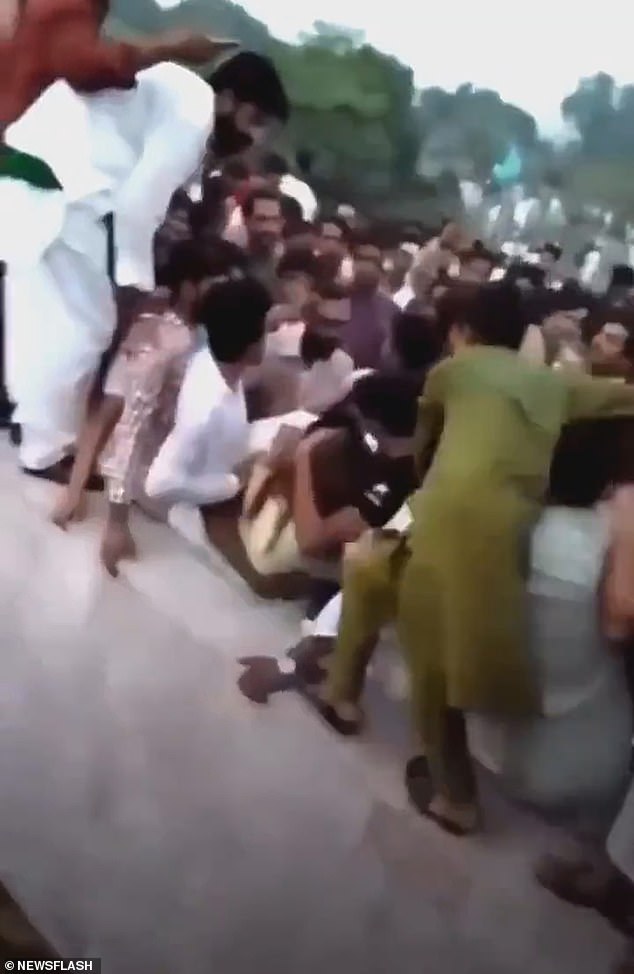 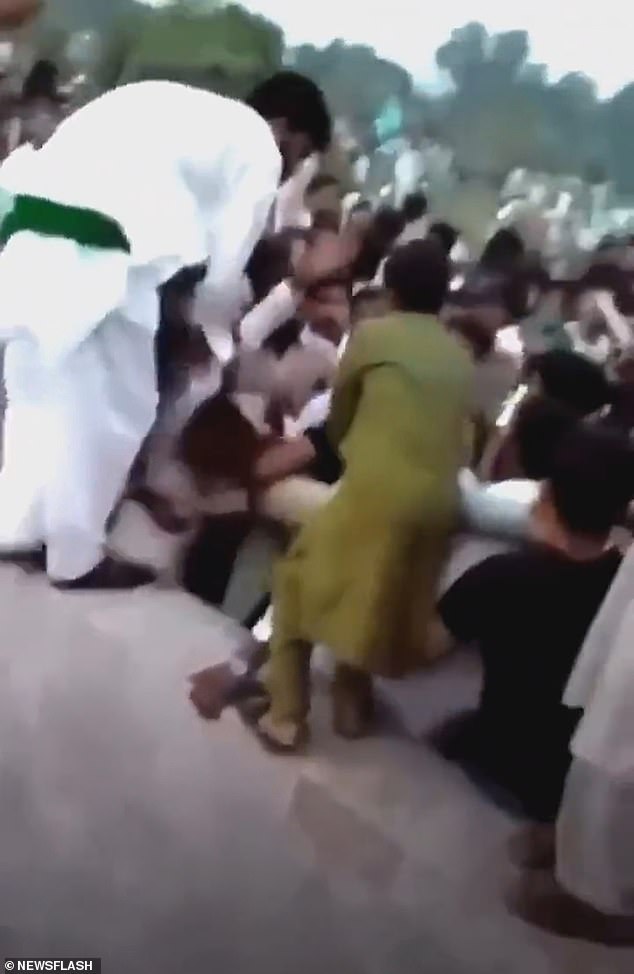 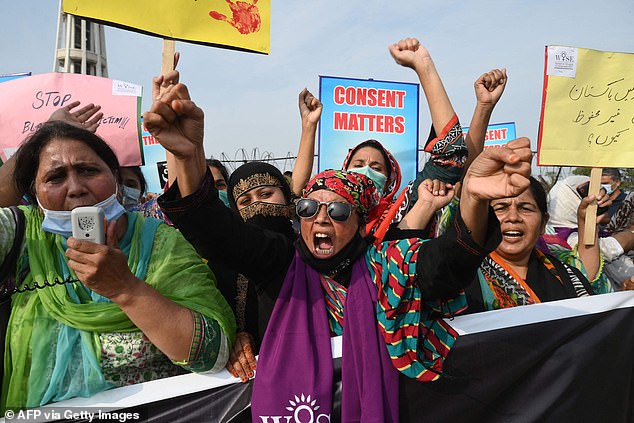 Hundreds of people took to the Minar-e monument to hold a demonstration on August 21, protesting against the treatment of women and calling for legal action against the perpetrators 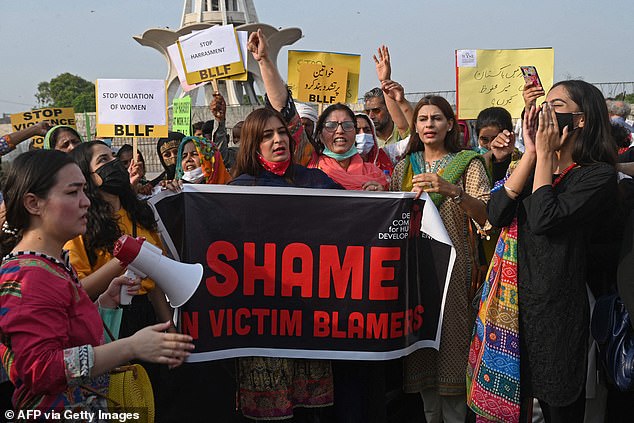 The demonstration also condemned incidents of victim-blaming, something for which even Pakistani Prime Minister Imran Khan has been accused of in recent months

According to a report from the Lorry Adda police station in Lahore, the victim told police officers: ‘People were pushing and pulling me to the extent that they tore my clothes.

‘Several people tried to help me but the crowd was too huge and they kept throwing me in the air.’

40 men are also being held in jail while authorities make arrangements for them to take part in an identity parade in the coming days, in which the victim and her companions, who were also mugged, will attempt to identify more of the perpetrators.

News of the incident precipitated an outcry of disgust in Pakistan, raising questions over women’s freedom and safety in a country where there are regular reports of aggression and violence against women.

Chairman of the Pakistan People’s Party, Bilawal Bhutto Zardari, said the incident should ‘shame every Pakistani’ which ‘speaks to a rot in our society’.

The video of the incident quickly went viral on social media, with Pakistani users calling for legal action or even the death penalty against the men involved.

Other uses likened the video of the men tearing at the victim to a pack of hyenas ripping apart their prey.

Pakistan ranked as the sixth most dangerous country in the world for women in a Thomson Reuters foundation survey in 2019, and less than 3% of rape cases in the country lead to convictions according to Karachi-based organisation War Against Rape.

Meanwhile, hundreds of people took to the Minar-e monument to hold a demonstration on August 21, calling on the government to prosecute the men who assaulted the victim and to condemn incidents of victim-blaming.

Only two months ago, Pakistani Prime Minister Imran Khan came under fire from human rights activists when he suggested in an interview that Pakistan’s alarming number of rape and assault cases could be blamed on how women dressed and behaved.

‘If a woman is wearing very few clothes it will have an impact on the men unless they are robots,’ the prime minister said in his June 20 interview.

‘If you raise temptation in society to a point – and all these young guys have nowhere to go – it has a consequence in the society.’

Pakistani senator Sherry Rehman said the prime minister’s attitudes reflected ‘a reflection of our culture of sexism and misogyny.’

‘By saying women should dress a certain way, he is giving oppressors and criminals against women a new narrative to justify their behaviour.’

But Khan’s information minister, Fawad Chaudhry, denied violence against women is on the rise, without offering evidence.

‘I think this perception is not really close to reality, that in Pakistan women are not safe or maybe that there´s a misogyny in practice in Pakistan,’ Chaudhry said. 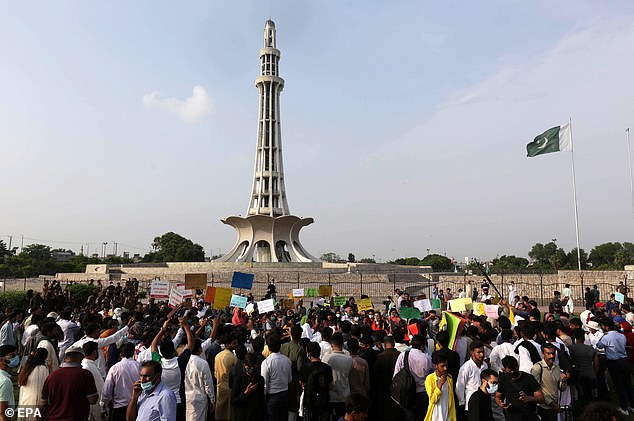 The crowd of protestors gathered at the monument in Greater Iqbal park in Lahore, close to where the assault took place, to lead the protest 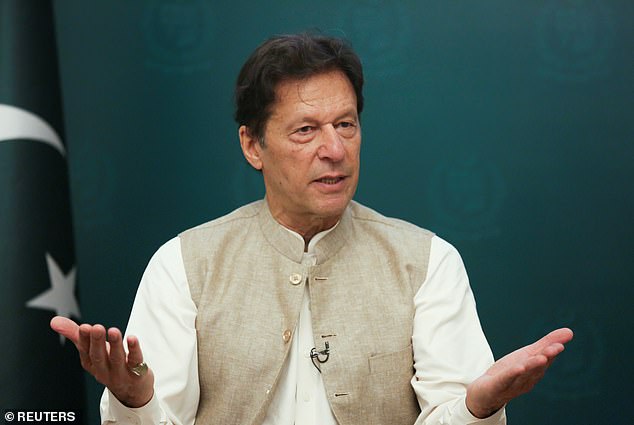 In 2020, Pakistan was near the bottom of the World Economic Forum´s global gender index, coming in at 153 of 156 countries, ahead of only Iraq, Yemen and Afghanistan.

The findings came after data collected from domestic violence hotlines across Pakistan showed a 200% increase in domestic violence between January and March last year, according to a Human Rights Watch report.

Many of the attacks on women in Pakistan are so-called honour killings, where the perpetrator is a brother, father or other male relative.

Each year, more than 1,000 women are the victims of honour killings, while many of the perpetrators escape jail according to human rights groups.