The 77,000-ton Type 001A vessel is expected to be put into service as early as this year. The 30-second footage shows the carrier undergoing the fifth and latest of its trials, conducted from February 27 to March 5, the South China Morning Post reported. The trials were conducted off the coast of the northeastern port of Dalian.

The vessel’s flight desk has the capacity to hold up to 32 J-15 fighter jets – six more than its second-hand predecessor the ‘Liaoning’, which was built in Ukraine in 1998 and refitted in China.

Meanwhile, China showed off the first of its new generation of guided missile destroyers on Tuesday as President Xi Jinping reviewed a major naval parade through mist and rain to mark 70 years since the founding of China’s navy.

Xi is overseeing a sweeping plan to refurbish the People’s Liberation Army (PLA) by developing everything from stealth jets to aircraft carriers as China ramps up its presence in the disputed South China Sea and around self-ruled Taiwan, which have rattled nerves around the region and in Washington.

The navy has been a major beneficiary of the modernisation, with China looking to project power far from its shores and protect its trading routes and citizens overseas. 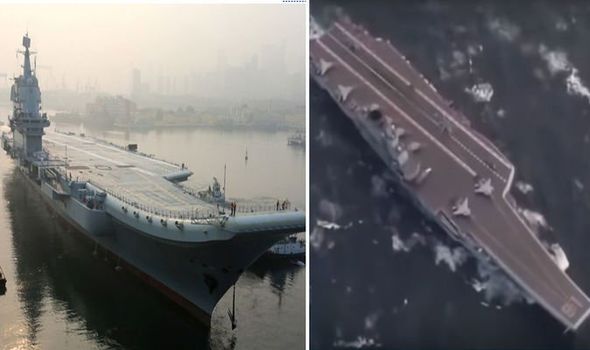 After boarding the destroyer the Xining, which was only commissioned two years ago, Xi watched as a flotilla of Chinese and foreign ships sailed past, in waters off the eastern port city of Qingdao.

“Salute to you, comrades. Comrades, thanks for your hard work,” Xi called out to the officers standing on deck as the ships sailed past, in images carried on state television.

“Hail to you, chairman,” they replied. “Serve the people.”

China’s first domestically produced aircraft carrier, which is still unnamed, was not present at the ceremony, though the carrier the Liaoning was, the report said.

State television also showed pictures of the Nanchang at the review, the first of a new fleet of 10,000-tonne destroyers, though details of that and other ships were hard to determine from the footage, due to the intermittent thick mist and rain.

Tuesday’s parade featured 32 Chinese vessels and 39 aircraft, as well as warships from 13 foreign countries including India, Japan, Vietnam and Australia.

A total of 61 countries have sent delegations to the event, which includes a naval symposium on Wednesday and Thursday.

There are fears China may use its navy to expand territorial and maritime control over vast swathes of the contested South China Sea.

China, Vietnam, the Philippines, Taiwan, Malaysia and Brunei all have competing claims.

The area has been nervously established as a potential future conflict zone.