FROM the other side of a zoo cage, most animals look tame and arguably approachable – but rest assured, these are still very much wild creatures with feral instincts.

Just this month a woman was viciously mauled to death by a tiger in a safari park enclosure after not being warned the cage door was open – and a keeper was pulled into an enclosure by an alligator. 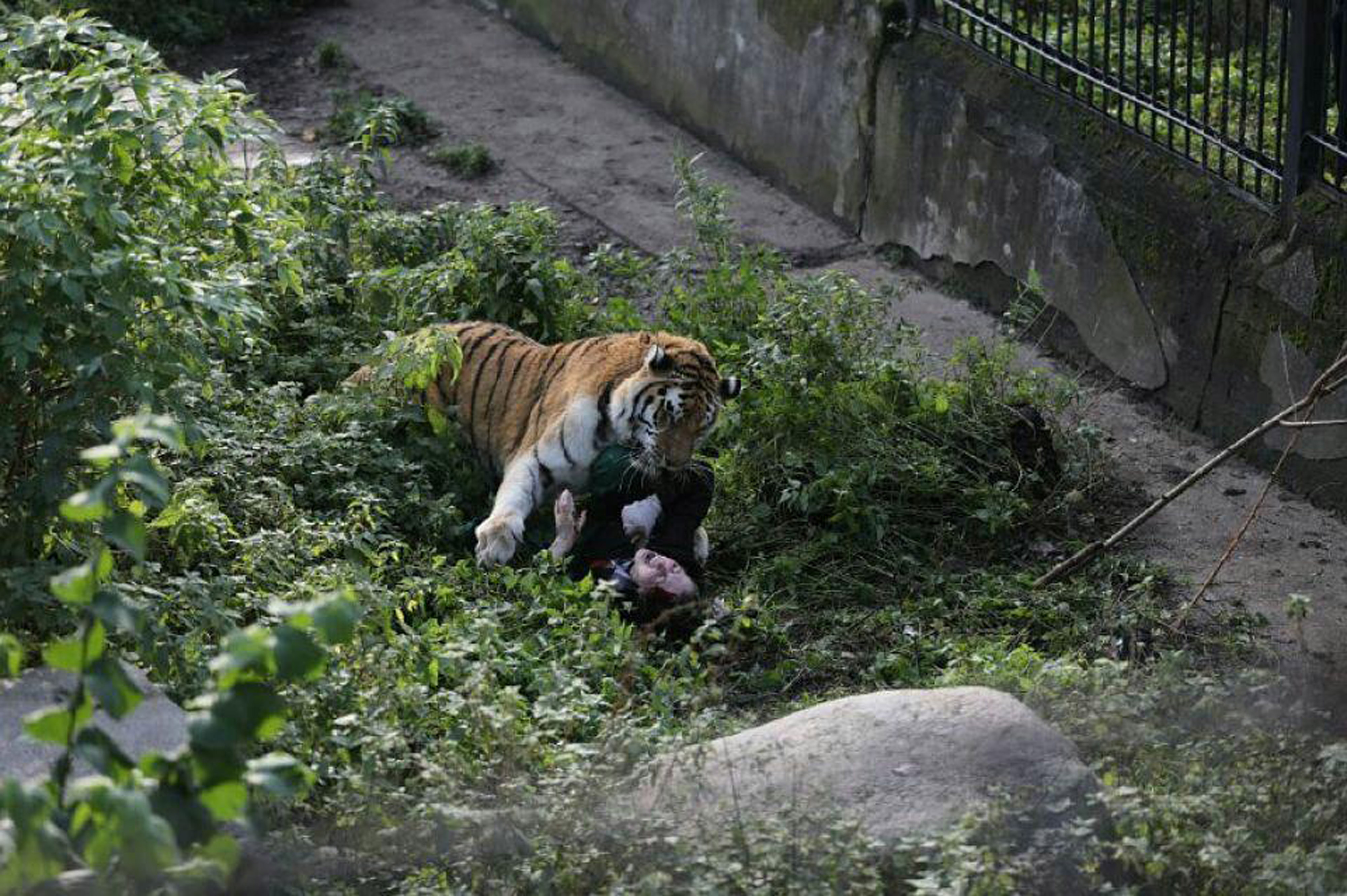 For the most part, walking around a zoo is an experience that fills visitors with delight and sparks interest – but on the odd occasion, chaos erupts animals turn deadly when people get just a little too close for comfort.

But it's not just tourists who have been targeted, as many animals have lashed out their keepers too. 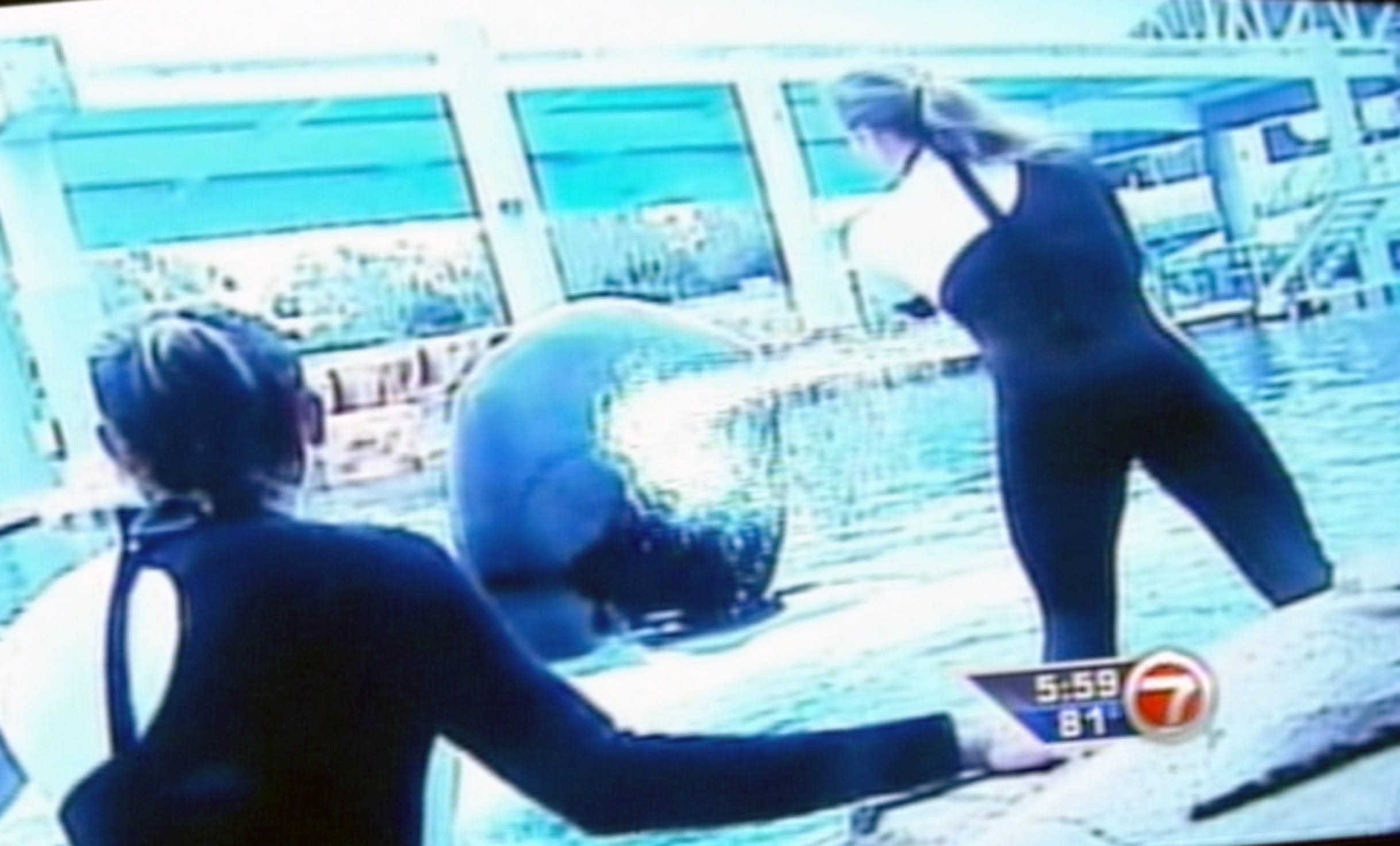 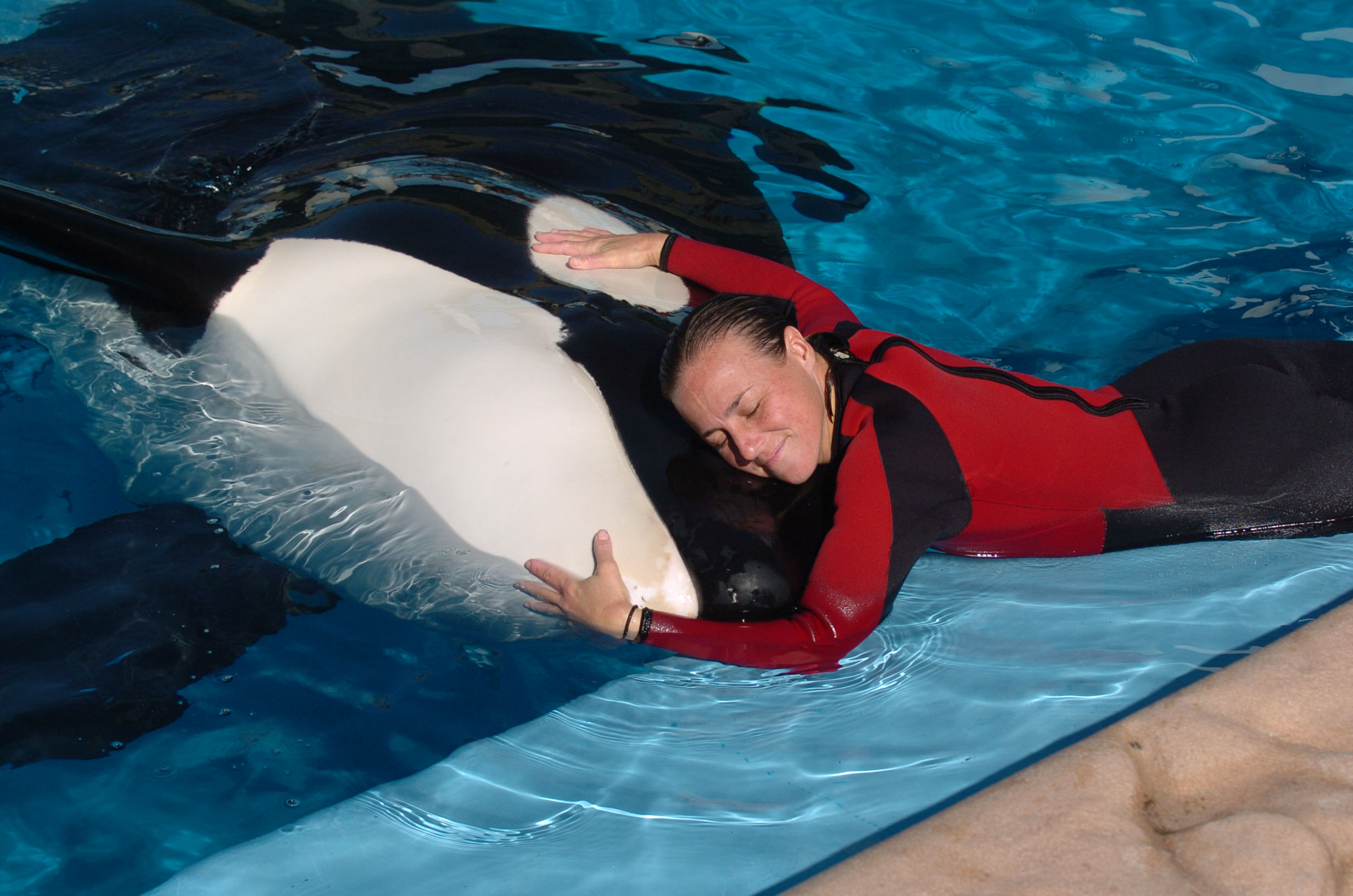 In one of the most gruesome cases, whale instructor Dawn Brancheau was hauled underwater and thrashed around during a performance at SeaWorld in Orlando as horrified onlookers watched on.

The 40-year-old was grabbed by her long ponytail by killer whale Tilikum before he swung her in his mouth during the incident in February 2010.

Staff desperately tried to tame the orca as guests were ushered out, but Dawn had died by the time her body was retrieved.

An autopsy revealed she died of blunt force trauma to the head, neck and torso, with part of her scalp "forcibly torn from the head". 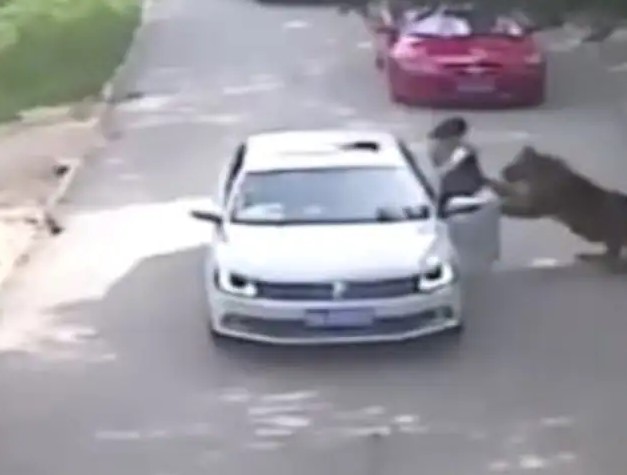 While driving through the tiger enclosure at a Beijing zoo, one woman was terrifyingly dragged away before her rescuer was mauled to death.

The woman, named as Ms Zhao, got out of her car at Badaling Wildlife World in July 2016 when a Siberian tiger pounced on her and pulled her into the bushes.

Her mother was mauled to death by a second tiger as she tried to save her.

Ms Zhao was reportedly left disabled from the horrifying incident. 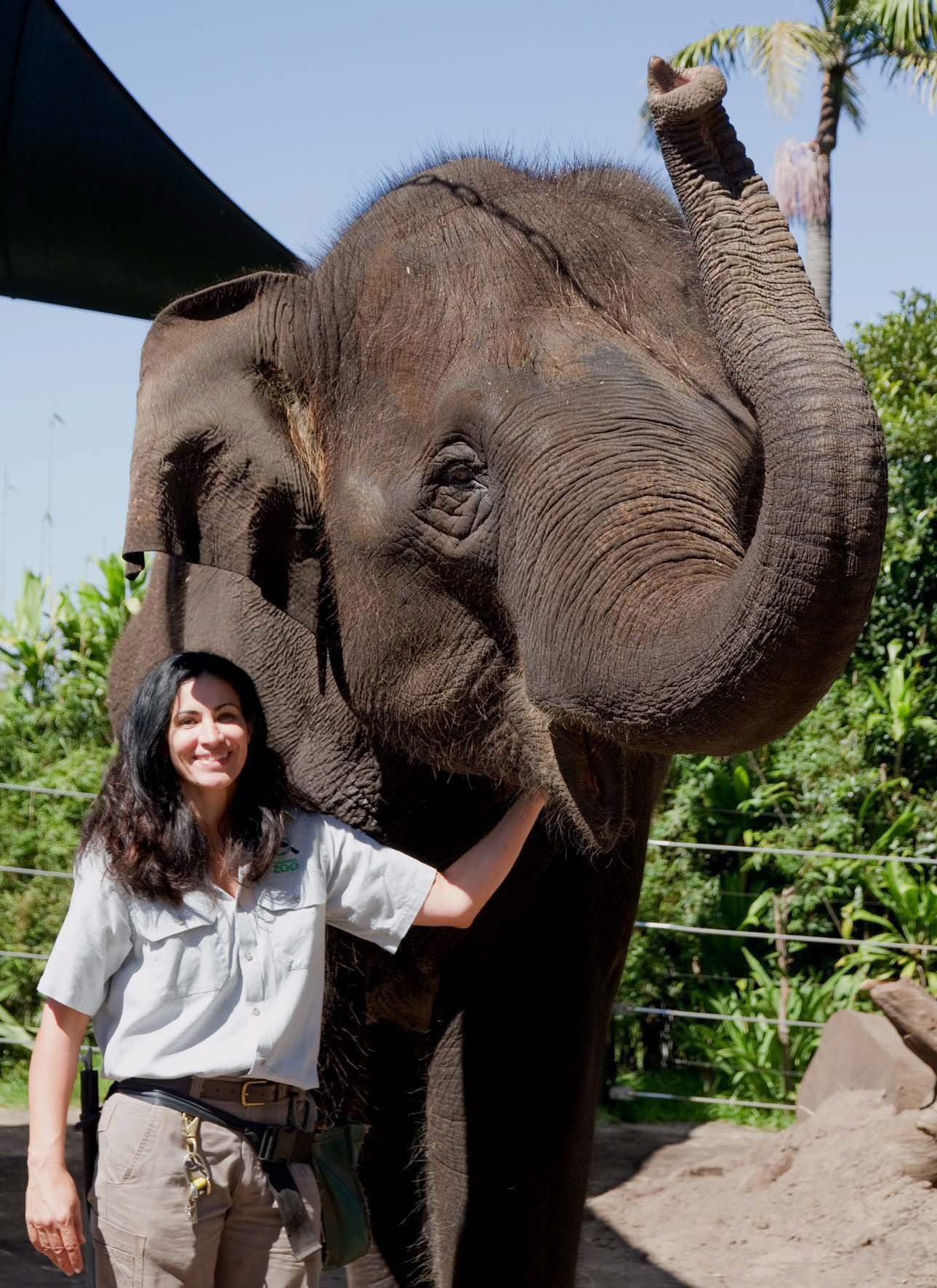 Zookeeper Lucy Melo was teaching a two-year-old male Asian elephant to wash in public view when he suddenly turned on her.

Melo was left fighting for life after the elephant crushed her against bollards at Sydney's zoo in 2012.

Thankfully, her co-workers intervened and she was rushed to hospital.

“I asked for one simple final behaviour. He offered me a slightly different behaviour than the one I had asked,” Ms Melo said in a statement after the attack.

“I asked him again for the correct version. When he did not respond, I sensed a behavioural change in him and realised he was thinking of challenging me.

“Just as I was almost out, he raised his trunk and pinned me against one of the metal bollards.

“His trunk on my chest took my breath away, which made it impossible for me to talk and tell him to stop.” 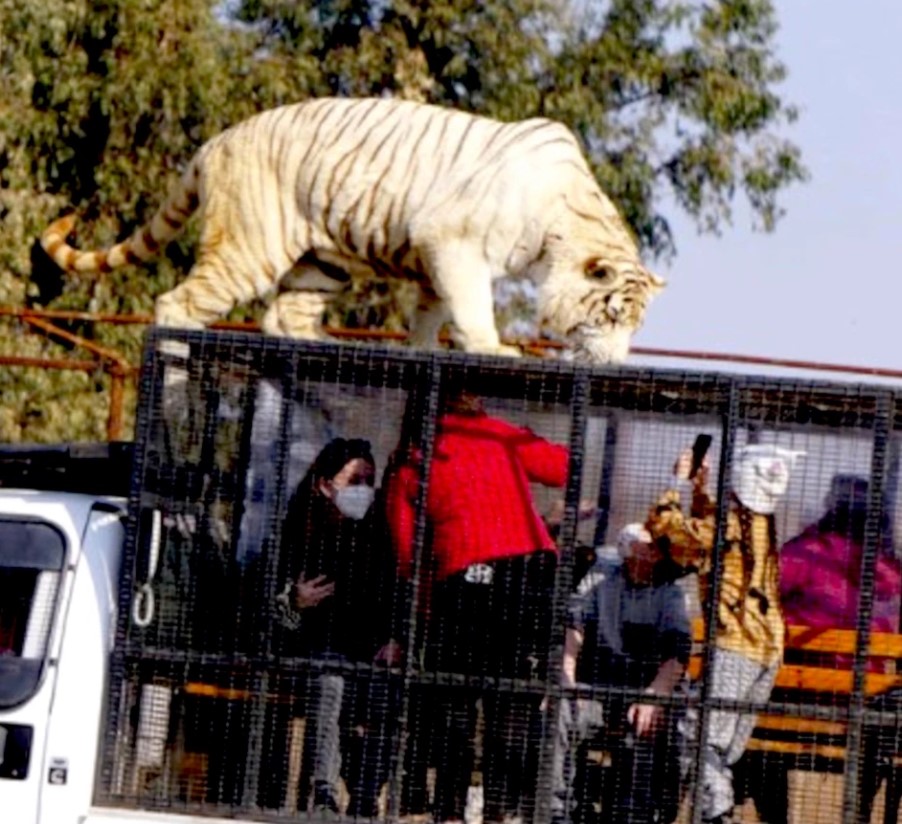 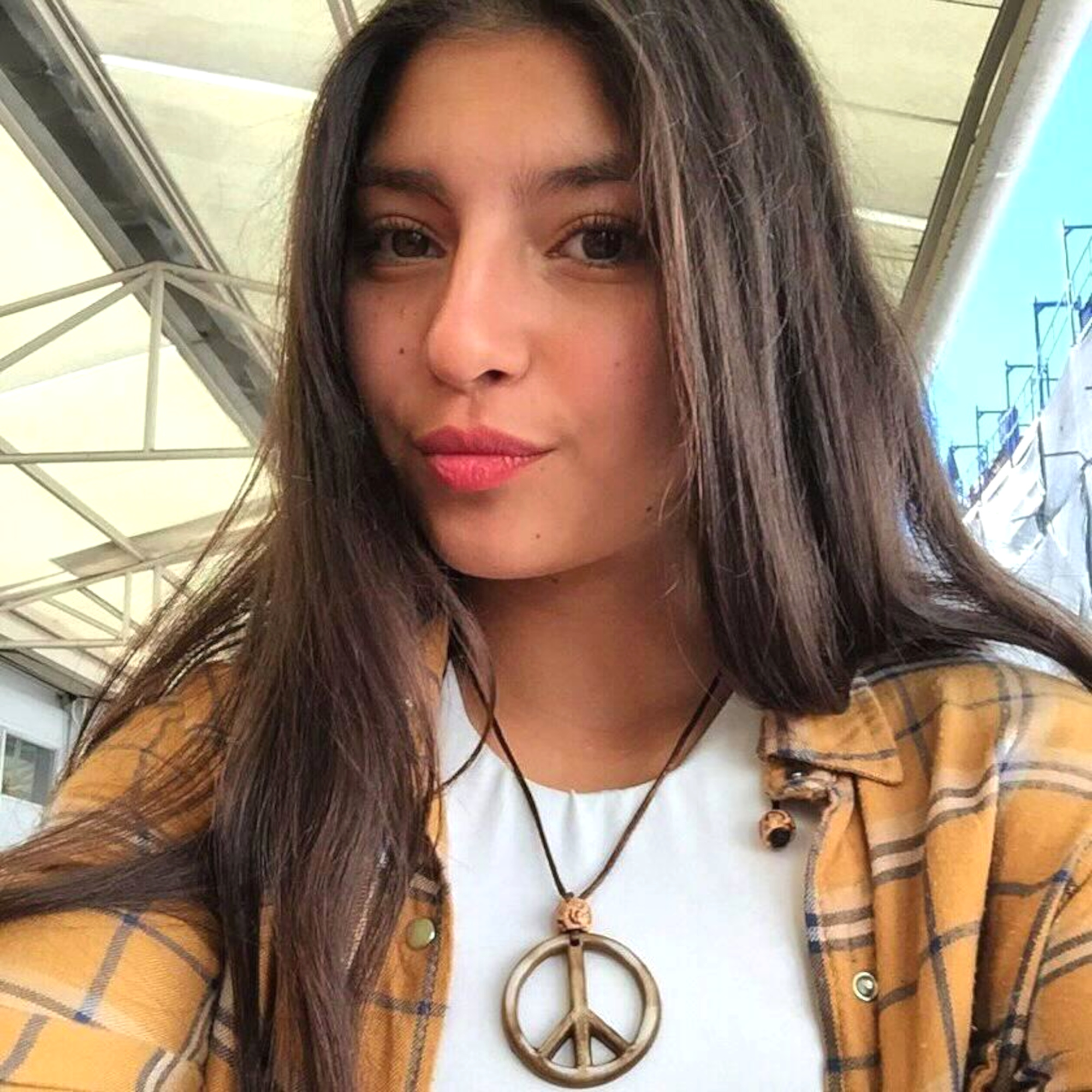 Catalina Torres Ibarra was killed in the big cat enclosure at a safari park in Chile this month after allegedly being sent into clean.

The 21-year-old was mauled to death by a tiger, but reportedly had not been warned the cage door was open.

She was allegedly told perform cleaning duties before the fatal attack in Rancagua, where she suffered horror neck wounds and died "on the spot."

But, according to her colleague Leonardo Maluenda, she was not told the tiger's cage door was open.

Leonardo told reporters: "The most logical thing is that they tell you to be careful if you go to clean up there because the tiger is loose, but they did not warn her." 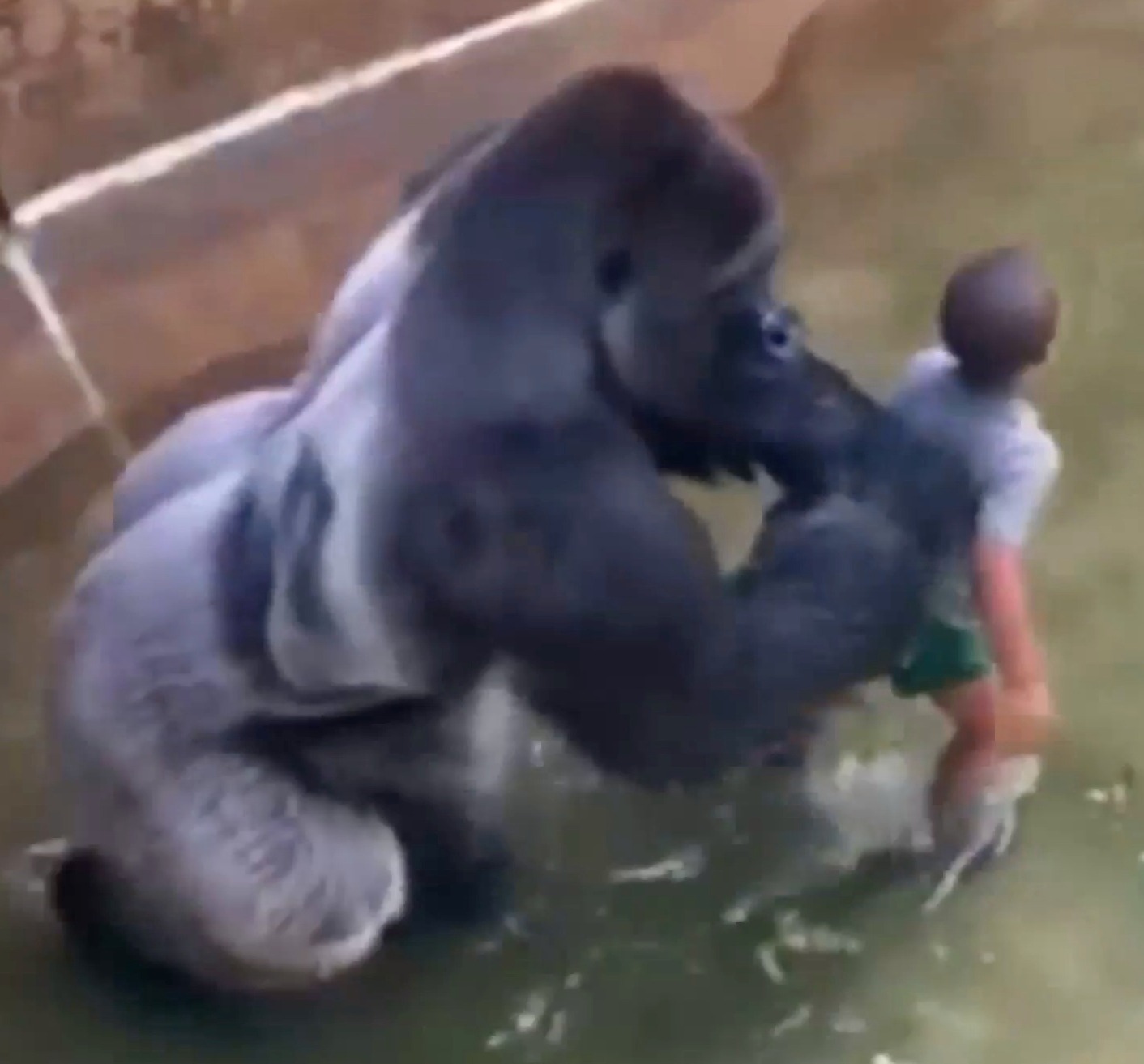 Harambe the gorilla became a global sensation after he was shot dead by a zookeeper at Cincinnati Zoo in 2016.

The 17-year-old gorilla grabbed and dragged a three-year-old boy who had climbed into his enclosure.

A zookeeper felt compelled to shoot Harambe – with the whole incident caught on camera.

It sparked debate across the world whether it was the correct decision to shoot Harambe.

The 10-minute ordeal saw the gorilla drag the tot through water as well as propping him up and pushing him over. 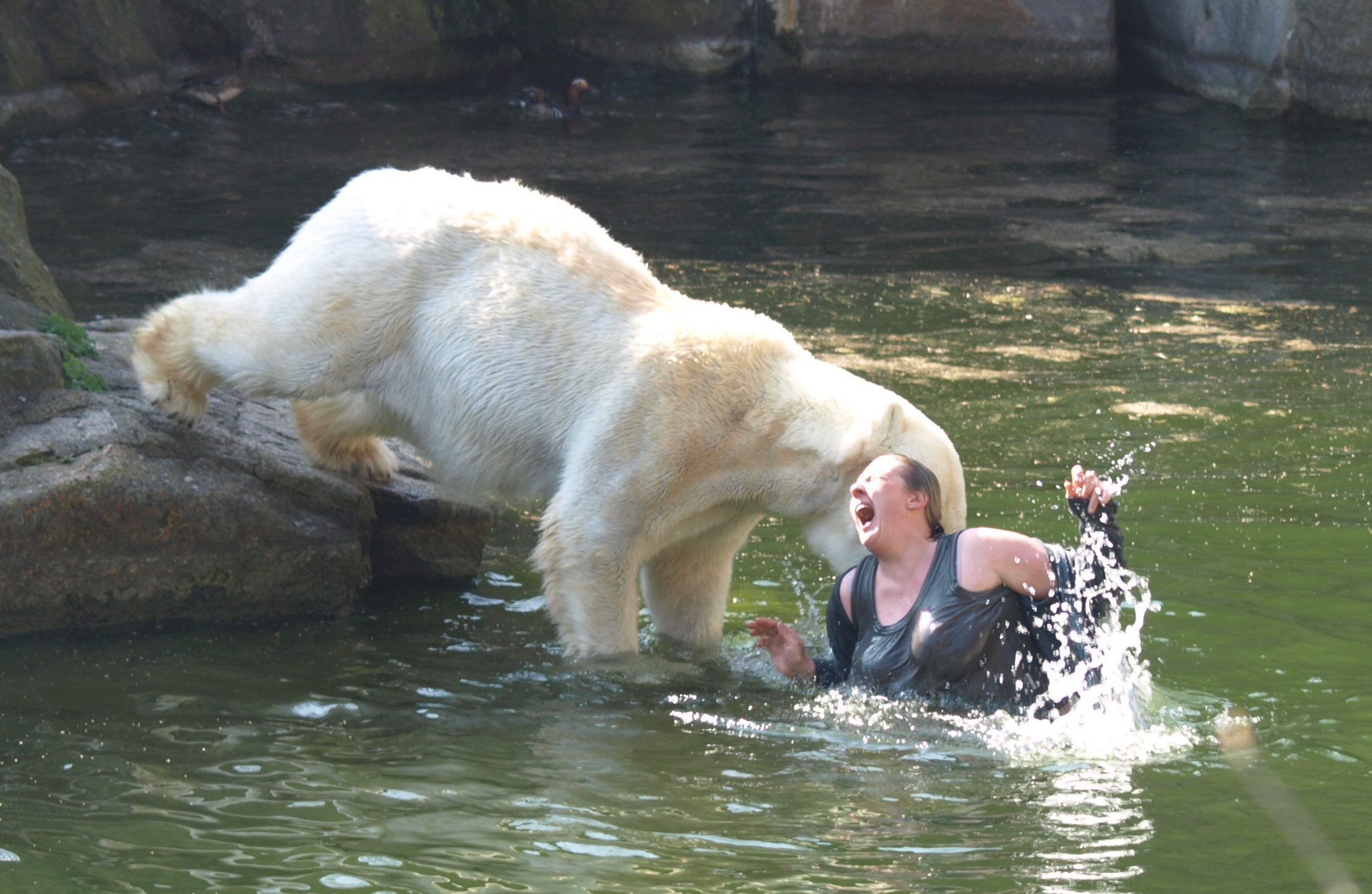 A visitor at Berlin Zoo was horrifically mauled by a polar bear after she leapt into the enclosure during feeding time in 2009.

The 32-year-old was savaged by the beast, who – despite the efforts of six zookeepers trying to to distract the bear – bit her arms and legs repeatedly.

Eventually, staff managed to haul the bear away and pluck the tourist to safety.

She was dashed to hospital and needed surgery on her wounds.

Disturbing images from the incident show the woman screaming out in pain and the bear locked its jaws onto her. 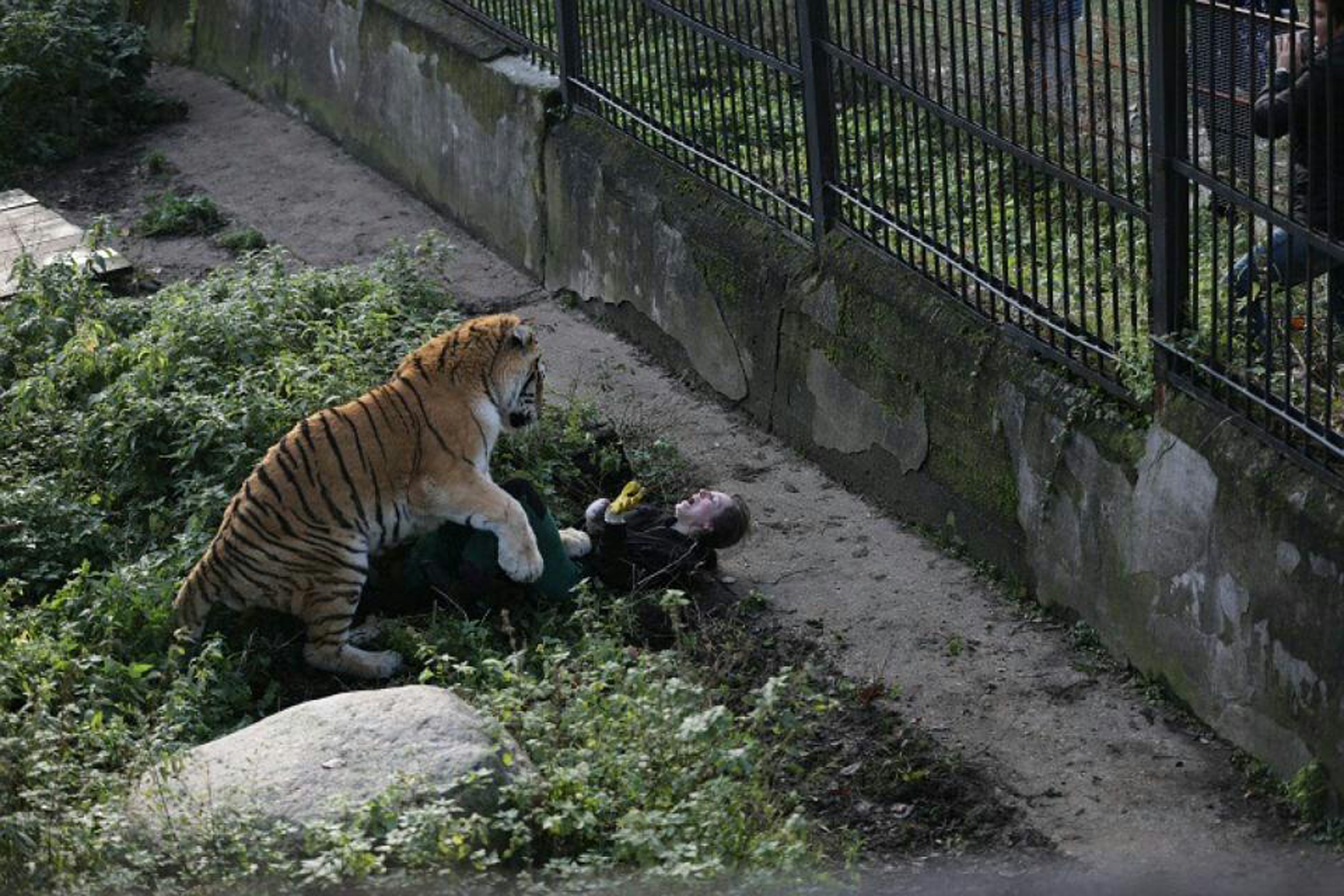 A zookeeper was badly mauled by a Siberian tiger in front of shocked visitors at a zoo in Russia in 2017.

The big cat pounced on the woman as she brought food to the animal – but she was miraculously saved by onlookers who shouted and threw things at the beast.

Men even lifted a table and chairs from a nearby cafe, hurling them over the fence to distract the 15-year-old male called Taifun, or Typhoon.

Dramatic pictures show the woman on her back on the ground with the tiger on top of her, seemingly going for the kill.

The woman can be seen screaming in terror as the animal – which had never attacked a keeper before – swipes at her with its paws.

But thanks to the quick-thinking bystanders who distracted the deadly predator, the woman was able to get up and run to safety before being rushed to hospital. 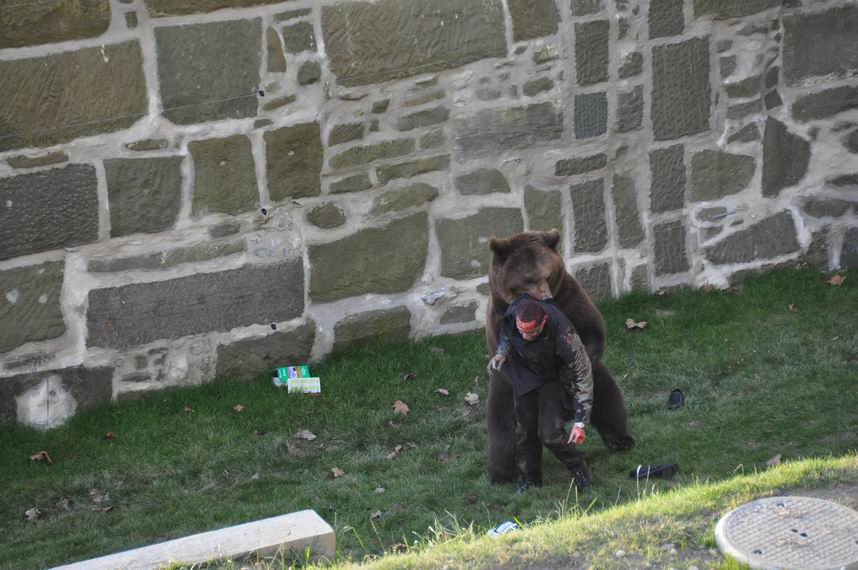 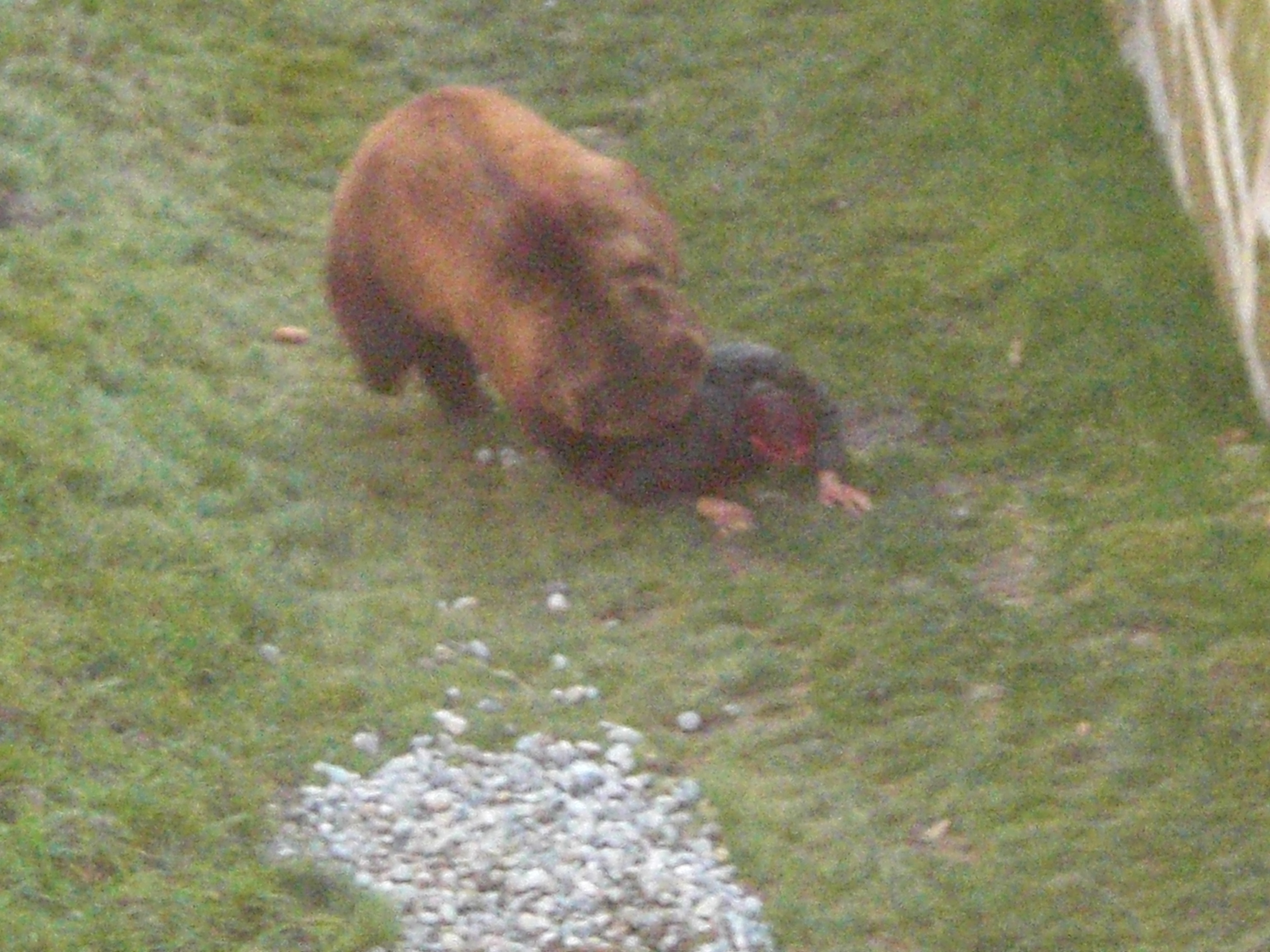 A man narrowly escaped certain death after almost being ripped apart when he jump into a bear's enclosure.

While visiting the Berne Bear Park in Switzerland in 2009, the man perched on a 20ft wall above the put of four-year-old bear, Finn, before plunging into the enclosure.

The predator quickly grabbed hold of the man, carrying him like a rag doll before sinking his razor sharp teeth into him

Worried park officials had already rung emergency services when they saw the man sitting on the wall – and so police quickly arrived on the scene and fired a bullet at the bear's chest.

The man was quickly stretchered out of the enclosure and was treated in hospital for severe head and leg injuries.