Massive cracks in the Yallourn coal mine caused by recent flooding have left a multimillion-dollar damage bill as the owner grapples with long-term repair works needed to avert further disruption to the state’s power supply.

Major flooding at Yallourn has drawn comparisons with the nearby former Hazelwood coal mine and power station, where a massive fire in 2014 precipitated the facility’s abrupt closure less than three years later. 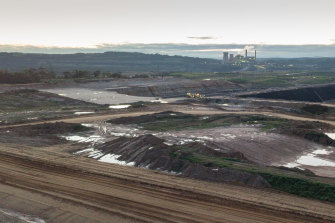 Damage to the mine, which was evacuated after recent wild weather, prompted the state government to declare an energy emergency last month.Credit:Jason South

Power giant EnergyAustralia confirmed it expects repairs to run to tens of millions of dollars at the Yallourn coal mine. The company is working on short-term measures to seal the cracks that are visible as it seeks a permanent solution to repair the damage.

However, EnergyAustralia has insisted it has no plans to change the 2028 closure date for Yallourn power station, announced earlier this year.

The cracks have emerged in the Morwell River diversion, which was rerouted to run through the Yallourn mine about 15 years ago. Recent floods resulted in major cracking in the walls of the diversion, raising the risk of further flooding in the mine.

The damage to the mine, which was evacuated after recent wild weather, prompted the state government to declare an energy emergency last month so urgent repair works could be carried out. 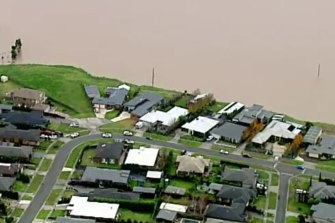 The township of Yallourn during last month’s floods. Credit:Nine News

Mining has resumed in sections of the mine but EnergyAustralia’s energy executive, Liz Westcott, said while the affected area of the Morwell River diversion had been stabilised, it remained vulnerable.

“Relieving pressure on the Morwell River diversion is essential to complete the full damage assessment alongside critical, permanent repairs,” she said.

The company said customers would see a “negligible impact” on their bills due to the situation at Yallourn.

The CFMEU’s mining and energy division Victorian secretary Geoff Dyke said cracks in the Morwell River diversion were up to 200 metres long and would be difficult to fix. He said the repairs would be much more complicated and costly if there was another heavy downpour similar to the recent catastrophic storms that rolled across the state. 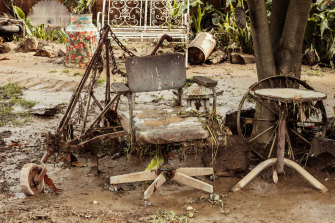 Mr Dyke said more damage may cause the company to reconsider its closure date for Yallourn.

“It may be different if the river diversion collapses,” he said. “That may prompt a rethink from EnergyAustralia.”

Last week the Environment Protection Authority granted approval for EnergyAustralia to release 232 megalitres of water into the Latrobe River.

The Yallourn power station supplies up to 22 per cent of Victoria’s energy needs. Three of the plant’s four generation units are now operating again.

Grattan Institute energy program director Tony Wood said the flood at Yallourn raised comparisons with the Hazelwood coal mine fire that burnt for 45 days in 2014. 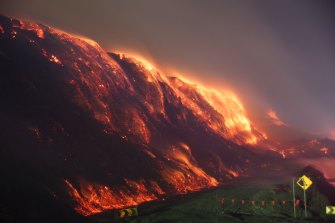 The inferno at Hazelwood in February 2014.Credit:Keith Pakenham

In 2016, Hazelwood operator Engie gave just six months’ notice of its decision to close the mine, resulting in the loss of 750 jobs.

Mr Wood said EnergyAustralia’s decision on the future of Yallourn would depend on the extent of the flood damage.

He said while Engie had wanted to vacate Australia almost completely after abruptly closing the Hazelwood mine, EnergyAustralia had a far greater presence here, including its retail division.

Mr Wood said it would not want to be the cause of electricity prices spiking if it suddenly closed the Yallourn power plant and mine, which would probably create a supply shortage.

Last week Energy Minister Lily D’Ambrosio said it was critical that a long-term solution was found to the problems at Yallourn to protect the mine and ensure Victoria’s energy security.