Has the Yorkshire pig had its bacon? Popular porker faces extinction as numbers slump to just 125

The large white pig – once one of Britain’s most popular breeds – faces extinction after numbers dropped to just 125.

The porker, also known as the Yorkshire pig, has been added to the Rare Breeds Survival Trust’s (RBST) ‘highest priority’ watchlist after numbers fell from 900 a decade ago.

Known for their pointy ears, the large white was in demand in the 1950s but declined after it was bred with the Landrace to develop a hybrid which bulked up more quickly.

The RBST said it had also seen a ‘significant decline’ in Norfolk horn sheep, which played a major part in the history of East Anglia. Its fleeces were the basis of the region’s famous worsted industry.

Also under threat is the Hackney horse and pony, of which there are now below 50. 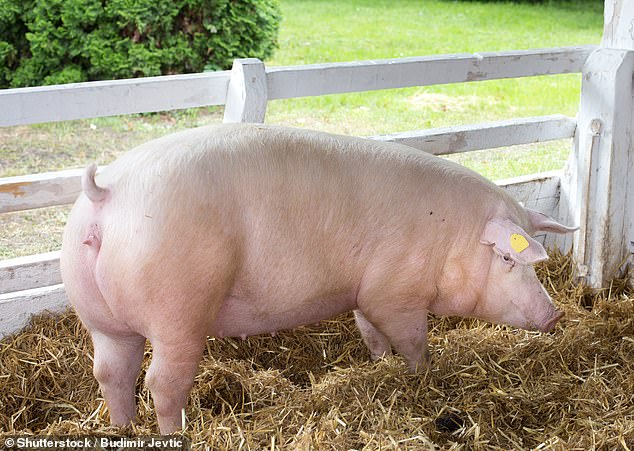 The large white pig, also known as the Yorkshire pig, has been added to the Rare Breeds Survival Trust’s (RBST) ‘highest priority’ watchlist

The RBST called it ‘extremely concerning. In the 1800s the Hackney was popular for its speed, stamina and elegance, in particular its high-stepping trot. In carriage-driving events, it is known as the ‘ballerina of the show ring’.

RBST chief executive Christopher Price said: ‘Some of our native breeds are in pretty dire straits right now. The situation for native pigs is very concerning.’

Mr Price added: ‘Today’s RBST Watchlist shows that many of our rare native breeds are holding a stable position thanks to the fantastic efforts of RBST members, despite the challenges and uncertainties of the pandemic.

‘In changing commercial conditions and as environmental sustainability comes to the fore of agricultural policy, the UK’s native breeds of livestock are increasingly attractive for farming and land management.’

He continued: ‘In sheep, there has been a significant decline in births of one of the UK’s oldest sheep breeds the Norfolk Horn, so that trend is cause for real concern too.

‘If we lose these breeds, we lose not only an irreplaceable piece of our heritage, but also their unique genetic value and their crucial contributions to a future for farming where food production and the environment go hand in hand.

‘There is good news in the stability or improvement for the Eriskay, Suffolk and Cleveland Bay breeds, however the Hackney’s effective population size continues to decline and we are urging more people to support the breed’s modern uses.’

The RBST said there has also been a ‘significant decline’ in Norfolk Horn sheep, which played a major part in the history and economy of East Anglia, with its fleeces the basis of the region’s famous worsted industry.

Gloucester cattle remain a major concern with a decline in the number of dams exacerbating concerns about lack of genetic diversity and geographic distribution.

In more positive news, the RBST said several breeds had a good breeding year in 2021 although remained on its priority list.

These included the English Goat and Old English Goat while remaining on the Priory list had a good year, as did Lincoln Longwool sheep, Exmouth and Dartmoor ponies, and Vaynol and Albion cattle.