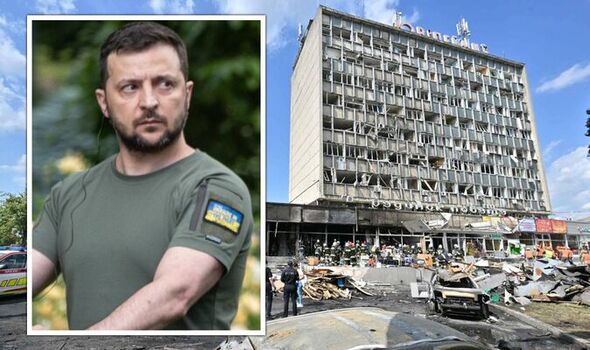 An office block and medical centre in Vinnytsia were hit by Kalibr cruise missiles fired from a submarine in the Black Sea. One of the dead children was last night named as four-year-old Liza Dmitrieva. Her mother, Irina, was in intensive care fighting for her life.

A picture taken minutes before the strike shows Liza, who had Down’s Syndrome, pushing her own pushchair. It is believed to be seen on videos at the scene of the horror.

Irina posted on social media earlier this year: “I have not been able to arrange a proper birthday party for Liza for two years. I am hoping her fifth birthday will give us a chance!

“I am scared to make wishes.”

One of the other children killed was a baby. 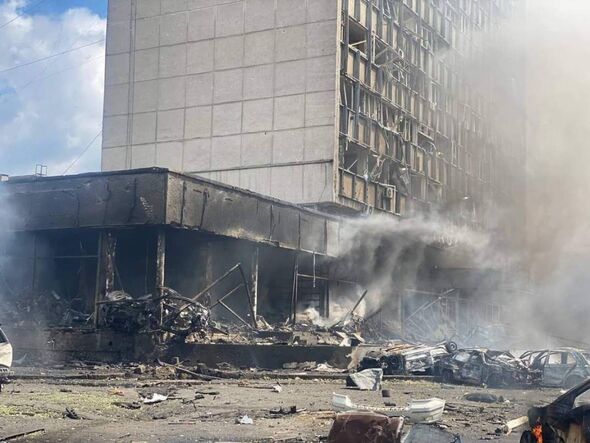 Moscow propaganda chief Margarita Simonyan said the Russians intended to strike at “Nazis” in a building called the Officer’s House, a concert hall.

“This was a temporary accommodation point for the Nazis,” she claimed.

There are fears the death toll could rise further, with 42 people reported missing. Another 100 were injured in the attack, officials said.

The bodies of a mother and her child, tangled with a pushchair, were visible under a bloodied white sheet on the street. Nearby, a pink buggy was covered in blood.

Video from the scene showed burning vehicles and a building engulfed in smoke and flames.The strikes damaged more than 50 buildings.

The governor of the Vinnytsia region, Serhiy Borzov, said Ukrainian air defence systems shot down another four missiles over the area.

The strike happened as representatives from about 40 countries met in The Hague to discuss coordinating efforts to investigate and prosecute potential war crimes in Ukraine.

Zelensky wrote on Telegram: “Every day Russia is destroying the civilian population, killing Ukrainian children, directing missiles at civilian objects. Where there is no military targets. What is it if not an open act of terrorism?”

“We will put Russian war criminals on trial for every drop of Ukrainian blood and tears,” he wrote.

Ukrainian pop singer Roxolana was due to play a show in the city last night, but the venue was destroyed. She posted on Instagram that all of her team were injured and
one died.

Thousands of people had fled to the city – about 170 miles from Kyiv – to escape Russia’s offensive in eastern Ukraine.

The city of around 370,000 people hosts the command HQ of the Ukrainian Air Force.

The atrocity came five days after a similar attack on Chasiv Yar which killed 48 people.

The Russian missile strike hit a five-storey apartment building in the city in Donetsk Oblast.